Something new in animation...Disney's "Paperman" 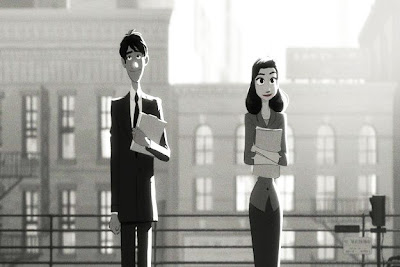 For those who didn’t catch it in theaters when it accompanied Wreck-It Ralph at the tail end of last year, Disney Animation’s Paperman has debuted online, giving everyone a chance to look at the Oscar-nominated animated short that blends hand-drawn and computer-generated imagery in a beautiful, innovative way that might just look like the future of animation as a whole. [See below]

The first thing you notice about Paperman is how different it seems from most modern cartoons, not just because of the limited color palette and retro styling of the characters and the world they live in, but because it doesn’t look like the generic, quasi-photo-realistic CGI animation of everything from Pixar’s Brave to, well, Disney’s Wreck-It Ralph. It actually looks as if real people have created it, not machines, and that’s something we haven’t really seen in feature animation for years.

That’s intentional, according to the man behind the short. Director John Kahrs told Cartoon Brew that the origin of Paperman “really came out of working so much with Glen [Keane] on Tangled.” After looking at the work of Keane — a classic Disney animator who worked on The Little Mermaid, Beauty and The Beast and Aladdin, among many other projects – Kahrs found himself with a new appreciation for traditional animation and drawing techniques. “I thought, Why do we have to leave these drawings behind? Why can’t we bring them back up to the front of the image again? Is there a way that CG can kinda carry along the hand drawn line in a way that we haven’t done before?”

The answer was yes. It just required a technology that no one had actually created yet.

Paperman‘s seemingly seamless way of blending the personality of hand-drawn animation with CGI in the physical space of the story is the result of new in-house software called Meander, a vector-based drawing program that allows for manipulation of the line after the fact — something that Kahrs described as “just like painting on the surface of the CG.”

In practice, it successfully blends the best of both forms of animation together in way they’ve never been seen before. Depicting George and Meg as flat, drawn characters keeps them safely out of the uncanny valley that even the best CGI sometimes can’t avoid and somehow makes them seem more real; other sequences, like the multiple paper airplanes zooming through the air, would be far less convincing and far more time-consuming if rendered without the help of computer generated imagery.

Paperman is up for the Best Animated Short Film award at this year’s Academy Awards. It easily deserves to win; as good as the other nominees are, nothing manages to be quite as touching, quite as impressive, or quite as aware of the legacy of the past of animation while pointing towards the future of the medium, as this is. If we’re lucky, perhaps more films will make use of Meander in future, and bring some visual variety back to our animated fare. And if they could manage to be as charming as this short, I don’t think anyone would find themselves complaining too loudly.