Library of Congress and vintage recordings 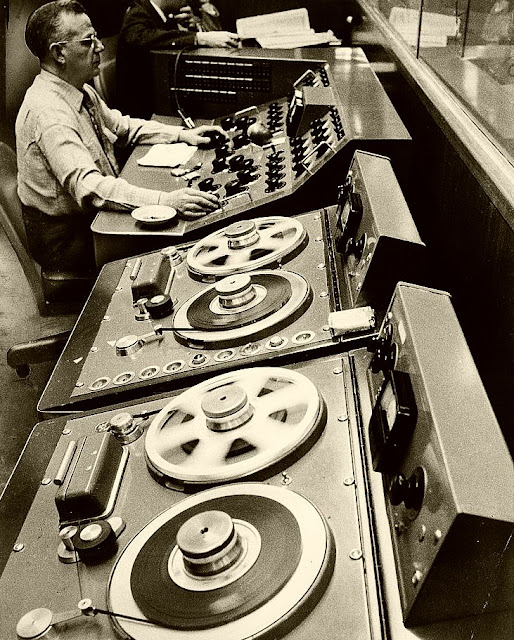 "Our Most Treasured Recordings Are Dying: Congress Has a Plan to Save Them"

Some of our most cherished historical recordings are in danger of being lost forever — indeed, some by George Gershwin, Judy Garland and Frank Sinatra are already goners. But we live in the future, where technology can land a crazy-advanced robotics rover on Mars and put exabytes of information at our fingertips. Isn’t someone working to safeguard this stuff?

It turns out they are: The Library of Congress unveiled a plan on Wednesday to preserve the country’s mammoth trove of recorded sound. It’s a huge deal if you care about this sort of thing, the culmination of sweeping research conducted over more than a decade.

The National Recording Preservation Act of 2000 originally called on the Librarian of Congress to establish a National Recording Registry “for the purpose of maintaining and preserving sound recordings that are culturally, historically, or aesthetically significant.” The Library’s just-announced plan is the net result of what remains an ongoing effort, reflecting the cumulative work of both the Library and a range of audio professionals, from composers and musicians to musicologists, archivists and members of the recording industry.

As early as 2002, the National Recording Preservation Board was nominating recordings for preservation annually — the total through 2012 stands at around 350. It’s an eclectic mix of recorded sound, ranging from seminal works by Thomas Edison in the late 1880s, Abbot and Costello’s infamous “Who’s on First?” 1938 radio broadcast and Miles Davis’ groundbreaking jazz album Kind of Blue to Martin Luther King, Jr.’s “I Have a Dream” speech, Glenn Gould’s original 1955 recording of Bach’s Goldberg Variations and Yahi language cylinder recordings by the last surviving member of the Native American Yana tribe (who died in 1916).

What does the Library’s announcement mean in view of what it’s already been doing? It’s not enough to simply preserve these recordings, argues the Library in an elaborate 78-page overview of the plan. We have to think about public access, educating professionals about preservation rolling forward and dealing with “outdated laws that impede both preservation and access.”

One of the key challenges, for instance, involves accommodating all the different types of recorded audio, ranging from wax cylinders and music rolls to vinyl records and magnetic tape; that much anyone with a basic historical understanding of the audio industry might surmise. Here’s something you might not: The problem doesn’t go away or even necessarily get smaller with digital audio. As NPR notes, the fact that we often don’t know how today’s “born digital” recordings were created puts them in as much danger as older recording formats.

The complications extend to software like Avid’s Pro Tools, one of the more popular high-end digital audio workstation tools. As National Recording Preservation Board chairman Sam Brylawski notes in the NPR piece, ”You hear stories about things recorded on … things like ProTools editing software 10 years ago, but the new version of the software isn’t compatible with the digital files of 10 and 20 years ago.” Think about the difficulties you’ve encountered working with text documents when moving between older and newer versions of popular word processors, then extrapolate to software that’s much more specialized and niche.

Then there’s storage to consider (do we have enough?), preservation know-how (are people sufficiently trained?), the pace of technological change (think how far we’ve come in the last decade alone) and inconsistent copyright laws with regard to historical recordings (the Library estimates rights owners have to date only released around 14% of historical recordings — the rest are essentially off-limits to preservationists).

To grapple with all that, the Library pulled together six task groups to study the issues and develop a set of formal recommendations. These were then distilled down to a total of 32, organized into four general areas: building the national sound recording preservation infrastructure, creating a blueprint for preservation strategies, promoting public access for educational purposes and outlining longer-term national strategies.

“The publication of this plan is a timely and historic achievement,” Librarian of Congress James H. Billington said of the Library’s plan. “As a nation, we have good reason to be proud of our record of creativity in the sound-recording arts and sciences. However, our collective energy in creating and consuming sound recordings has not been matched by an equal level of interest in preserving them for posterity. Radio broadcasts, music, interviews, historic speeches, field recordings, comedy records, author readings and other recordings have already been forever lost to the American people.”
That said, we’re already too late for some of these recordings. According to the Library:


Experts estimate that more than half of the titles recorded on cylinder records—the dominant format used by the U.S. recording industry during its first 23 years—have not survived. The archive of one of radio’s leading networks is lost. A fire at the storage facility of a principal record company ruined an unknown number of master recordings of both owned and leased materials. The whereabouts of a wire recording made by the crew members of the Enola Gay from inside the plane as the atom bomb was dropped on Hiroshima are unknown. Many key recordings made by George Gershwin no longer survive. Recordings by Frank Sinatra, Judy Garland, and other top recording artists have been lost. Personal collections belonging to recording artists were destroyed in Hurricanes Katrina and Sandy.

Among the Library’s recommendations, it’s arguing for the creation of a “publicly accessible national directory of institutional, corporate and private recorded-sound collections and an authoritative national discography that details the production of recordings and the location of preservation copies in public institutions.” It’s recommending that we develop a national collection standard for all sound recordings as well as secure environmentally controlled storage facilities, that we need academic degree-based programs for audio archiving and preservation, that we lay down standards for preserving digital audio files, that we develop a license agreement for streaming out-of-print recordings and that we apply federal copyright law to sound recordings created prior to Feb. 15, 1972 (recordings prior to this date are still subject to state or common copyright law through Feb. 15, 2067).

“Saving America’s recorded sound history and culture will require a concerted effort lasting many years,” adds Billington, sounding a pragmatics-minded cautionary note. “Keep in mind while reading the plan that its recommendations require a deliberately long view. The Library published its national plan for preserving the nation’s film heritage in 1994. Great progress has since been made in implementing its recommendations, but the efforts continue, much remains to be done, and similar long-term commitment and collaboration will be necessary to achieve many of the recommendations in the National Recording Preservation Plan.”

It’s hard to tell just glancing through the Library’s report how effective it’ll be rolling forward, or whether it should have taken this long just to present a plan in the first place. But maintaining stuff like this in its original form for historical purposes…you can’t really put a price tag on it. And so I’ll just join with radio legend Bob Edwards, who’s said of the plan, “I applaud this initiative and wish the Library of Congress success in its mission.”
Posted by Mercury at 3:31 PM