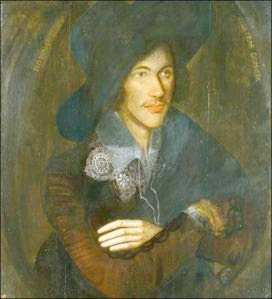 It sucked me first, and now sucks thee,
And in this flea, our two bloods mingled be;
Thou know’st that this cannot be said
A sin, or shame, or loss of maidenhead…
This flea is you and I, and this
Our marriage bed, and marriage temple is.

Donne was, in fact, a rake and a bawd before he became a preacher and, in the fullness of time, the dean of St. Paul’s Cathedral, famous for his sermons and celebrated at court. He wrote poetry throughout this checkered, picaresque career. Almost none of it was published in his lifetime. But the range of the work that survives does include not only canonical love poems like “A Valediction: Forbidding Mourning” but erotica also both intricate and raw.

Donne was born Roman Catholic at a bad time to be a Catholic in England. It was 1572. Queen Elizabeth was having Jesuits hanged, drawn, and quartered. Donne’s great-great-uncle was Thomas More, the author of “Utopia” and a Catholic. He was beheaded during the Reformation. Donne’s brother Henry died of the plague in prison at the age of twenty while awaiting trial for hiding a Catholic priest in his lodgings. Young John was more discreet. He went to Oxford at twelve, but left before turning sixteen to avoid a mandatory oath rejecting Catholicism. He became a law student and, according to a contemporary, “a great visitor of ladies” and “a great writer of conceited verses.” He stayed out of religious debates and sought the divine elsewhere.

From “Elegy XIX: To His Mistress Going to Bed”:


Off with that girdle, like heaven’s zone glistering,
But a far fairer world encompassing.
Unpin that spangled breastplate, which you wear
That th’eyes of busy fools may be stopped there:
Unlace yourself, for that harmonious chime
Tells me from you that now it is bed time.

He liked to travel slowly, slowly down his lover’s body. From “Elegy XVIII: Love’s Progress”:


Her swelling lips; to which when we are come,
We anchor there, and think ourselves at home,
For they seem all: there sirens’ songs, and there
Wise Delphic oracles do fill the ear;
There in a creek where chosen pearls do swell,
The remora, her cleaving tongue doth dwell.
These, and the glorious promontory, her chin
O’erpast; and the strait Hellespont between
The Sestos and Abydos of her breasts,
(Not of two lovers, but two loves the nests)
Succeeds a boundless sea, but that thine eye
Some island moles may scattered there descry;
And sailing towards her India, in that way
Shall at her fair Atlantic navel stay;
Though thence the current be thy pilot made,
Yet ere thou be where thou wouldst be embayed,
Thou shalt upon another forest set,
Where some do shipwreck, and no further get.
When thou art there, consider what this chase
Misspent by thy beginning at the face.

He could be sarcastic and gross. From “Elegy VIII: The Comparison”:


Then like the chemic’s masculine equal fire,
Which in the limbeck’s warm womb doth inspire
Into th’ earth’s worthless dirt a soul of gold,
Such cherishing heat her best loved part doth hold.
Thine’s like the dread mouth of a fired gun,
Or like hot liquid metals newly run
Into clay moulds, or like to that Etna,
Where round about the grass is burnt away.

Donne’s sexual interests were catholic. In “Sappho to Philaenis,” he considers same-sex attraction:


Hand to strange hand, lip to lip none denies;
Why should they breast to breast, or thighs to thighs?
Likeness begets such strange self flattery,
That touching myself, all seems done to thee.

Donne’s career as a ladies’ man ended after he met Anne More. She was a teen-ager at the time, fresh from the countryside, and he was a secretary to her uncle Sir Thomas Egerton, who was a close advisor to the Queen and lived in a grand house in Whitehall. Donne and More fell in love, prompting much yearning and, it is thought, one of Donne’s best-known conceits. From “The Flea”:


It sucked me first, and now sucks thee,
And in this flea, our two bloods mingled be;
Thou know’st that this cannot be said
A sin, or shame, or loss of maidenhead…
This flea is you and I, and this
Our marriage bed, and marriage temple is.

They married, despite parental objections so vehement that Donne was thrown in jail. After his release, the couple left London. Donne became an uxorious husband, father of twelve (seven survived), and the author of mature love poems such as “The Sun Rising,” “The Canonization,” and “The Exstasie.” From “The Good Morrow”:


And now good morrow to our waking souls,
Which watch not one another out of fear;
For love, all love of other sights controls,
And makes one little room an every where.

The first collection of Donne’s poems was published in 1633, two years after his death—they had previously circulated only as copied manuscripts among a coterie. A few of the most scandalous early elegies first saw print in 1669. They were always controversial, of course. Churchmen and the priggish found them offensive. Some feminist critics find them misogynistic. They may be an acquired taste. If so, I fear that I have acquired it.

So I was pleased to see “To His Mistress Going to Bed” being lauded by the great Australian writer, David Malouf, in his new book, “The Happy Life.” Malouf writes of Donne, “His celebration of his mistress’s body is free, happy, entirely without shame or guilt, and expresses itself in language so active and sensual that it not only reproduces, as far as language can, his own energy and excitement, but attempts to transfer that energy, with its kinetic rhythms, to us as we read:


Licence my roving hands, and let them go
Behind, before, above, between, below.
Oh my America! my new-found-land."