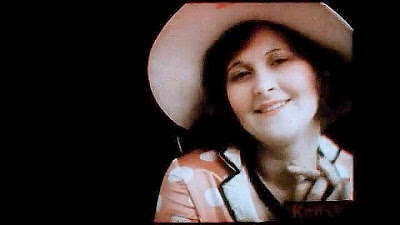 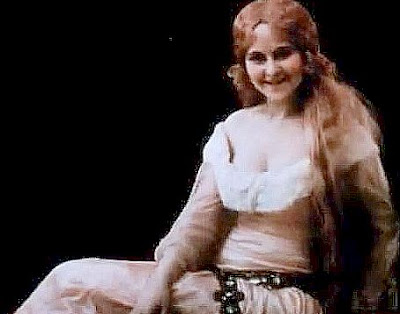 This clip is a very early, full-color Kodachrome film made by Kodak in 1922 to test new film stock and color processing. It is a lovely little four-and-a-half minutes of pretty actresses gesturing for the camera. The color and lighting are exquisite—all warm reds with flattering highlights—making it a purely enjoyable thing to watch.

In 1922, for all its technical achievements, Kodak hadn’t yet done away with the flicker that gave movies one of their earliest and most enduring nicknames: the “flicks.” The flicker resulted from variations in film speed produced by the slow, hand-cranked cameras of the time and by variations in the density of the film itself (as you can read in the post about this film clip on Kodak’s blog, A Thousand Words). [See below]

Even more interesting to a modern viewer are the women’s gestures. They act out fluttery, innocent modesty; warm maternal love; and in the longest sequence, sexy, puckered-lip vamping. Their open expressions of feeling and the particular way they move their hands and tilt their heads, even more than the fashions of their clothes and makeup, immediately mark them as women of the interwar period. Recently a Russian film scholar, Oksana Bulgakowa, has shown how various feelings and meanings were coded in the gestures of early film actors. Some of these are so unfamiliar now, they seem like a foreign language.

Today, when we watch a TV show or a movie, we see a wide range of acting styles and behaviors. A hundred years from now, which ones will be seen as defining our age?

Recently I saw a piece of film at the George Eastman House International Museum of Photography and Film that mesmerized me. It was a test of Kodachrome color motion picture film from 1922. To provide context, the first full length color feature film did not appear until 13-years later (Becky Sharp). Watching this little film clip was like time travel for me!

I thought that it would be interesting to share during Oscar® week. In order to share we had to scan the original piece of film to create the version you will see below. That is where Kyle Alvut came in.

I knew that this little piece of footage was in good hands. I learned that the flicker that you will see is a result of two different things. First, early cameras were hand cranked, or hand wound, to feed the film through. This could result in slight variations in speed. Second, there could be uneven densities in the film itself because of its age. These two  physical characteristics combine to produce the "flicker" that you see. There are digital enhancements that  can be made to address this but we thought it better to keep this in its original form.

I wonder, who were the ladies in this test? Were they Kodak employees? What kind of lives did they lead? Those questions are lost to the ages.

So without further adieu, here from 1922, a full 7 years before the first Academy Award ceremony, is some of the earliest color motion pictures that you will ever see.

This just in from friend and fellow film geek Mike C. more information on this piece of footage from a Silent Film Festival site. Well done!

In these newly preserved tests, made in 1922 at the Paragon Studios in Fort Lee, New Jersey, actress Mae Murray appears almost translucent, her flesh a pale white that is reminiscent of perfectly sculpted marble, enhanced with touches of color to her lips, eyes, and hair. She is joined by actress Hope Hampton modeling costumes from The Light in the Dark (1922), which contained the first commercial use of Two-Color Kodachrome in a feature film. Ziegfeld Follies actress Mary Eaton and an unidentified woman and child also appear.

George Eastman House is the repository for many of the early tests made by the Eastman Kodak Company of their various motion picture film stocks and color processes. The Two-Color Kodachrome Process was an attempt to bring natural lifelike colors to the screen through the photochemical method in a subtractive color system. First tests on the Two-Color Kodachrome Process were begun in late 1914. Shot with a dual-lens camera, the process recorded filtered images on black/white negative stock, then made black/white separation positives. The final prints were actually produced by bleaching and tanning a double-coated duplicate negative (made from the positive separations), then dyeing the emulsion green/blue on one side and red on the other. Combined they created a rather ethereal palette of hues.

This footage is from the George Eastman House collections. Preservation was completed by the museum's Motion Picture Department, a project of Sabrina Negri, a student in Eastman House's L. Jeffrey Selznick School of Film Preservation and a recipient of the Haghefilm Foundation Fellowship.

Two historical cinematic Halloween offerings
Posted by Mercury at 9:46 AM