Edward Alexander Bouchet...first African-American to earn a Ph.D. in physics 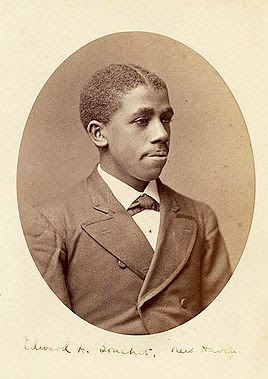 Physicists of the African Diaspora...

Bouchet had the misfortune of being a talented and educated black man who lived in a segregated society that imposed numerous barriers and thus hindered him from conducting scientific research and achieving professional recognition. Segregation produced isolation as Bouchet spent his career in high schools with limited resources and poorly equipped labs. No white college would have considered him for a position on its faculty even with his superior qualifications. Completely excluded from any means of utilizing his education and talent, Bouchet languished in obscurity. The ascendance of industrial education also served to limit his opportunities as his academic training in the natural sciences made him unattractive as a candidate at the increasing number of black institutions that adopted a vocational curriculum.

William Bouchet migrated to New Haven from South Charleston, South Carolina in 1824 for William was the valet of a young plantation owner, the future father of Judge John B. Robertson [corrected from A. Heaton Robinson by descendent A. Heaton Robertson] of New Haven, Connecticut. When the young planter graduated, he freed William Bouchet and gave him money to start a business. William was said to have been prominent in New Haven's Negro community, serving as deacon of the Temple Street Church, the oldest Negro church in the city, and which was a stopping point for fugitive slaves along the Underground Railroad.

As the youngest and only son of four children, Edward Alexander Bouchet was born to William and Susan (Cooley) Bouchet in New Haven on September 15, 1852. During the 1850s and 1860s New Haven had only three schools that black children could attend. Edward was enrolled in the Artisan Street Colored School, a small (only thirty seats), ungraded school with one teacher, Sarah Wilson, who played a crucial role in nurturing Bouchet's academic abilities and his desire to learn. He attended the New Haven High School (1866-1868).

In 1868 Bouchet was accepted into Hopkins Grammar School, a private institution that prepared young men for the classical and scientific departments at Yale College. He graduated first in his class at Hopkins. Edward (along with A. Heaton Robinson) entered Yale College in 1870. Four years later when he he was the first Black to be graduated from Yale in 1874, he ranked sixth in a class of 124. On the basis of this exceptional performance, Bouchet became the first black in the nation to be nominated to Phi Beta Kappa, but he was not elected at that time. [NOTE: George Washington Henderson was elected to Phi Beta Kappa in 1877 at the University of Vermont as the first, Bouchet was not elected until 1884]

In the fall of 1874 he returned to Yale with the encouragement and financial support of Alfred Cope, a Philadelphia philanthropist. In 1876 Bouchet successfully completed his dissertation on the new subject of geometrical optics, becoming the first black person to earn a Ph.D. from an American university as well as the sixth American of any race to earn a Ph.D. in physics.

Unlike anyone else in the U.S. who earned a Ph.D. at that time and for the next 80 years, Bouchet was unable to obtain a college (or university) position. So Bouchet moved to Philadelphia to teach at the Institute for Colored Youth (ICY), the same institution at which Charles Reason was Principal 20 years earlier, and the city's only high school for black students (founded by the Society of Friends because African Americans had historically been denied admittance to Philadelphia's white high schools). Members of the ICY board of managers like Cope, Bouchet's Yale benefactor, believed firmly in the value of a classical education and were convinced that blacks were capable of unlimited educational achievement. In 1874 Cope had provided $40,000 to establish a new science program at ICY, and soon thereafter began recruiting Bouchet to run it.

Although Philadelphia was as segregated as any southern city, it offered a supportive environment for a man of Bouchet's abilities. The city's black population, the largest in the North, had made considerable progress in education during the decades preceding his arrival. As early as 1849 half the city's black population was active in one or more of the many literary societies established by the black community. After the Civil War, the ICY played an important role in training the thousands of black teachers that were needed throughout the country to provide freedmen with the education they sought.

Dr. Bouchet taught chemistry and physics for twenty-six years at ICY. Dr. Bouchet resigned in 1902 when the Institute's college preparatory program was discontinued "at the height of the Du Bois-Washington controversy over industrial vs. collegiate education." The school was moved to Cheney, PA as a vocational and teacher-training school; the name was changed in later years to Cheney State College.

By the turn of the century, a new set of ICY managers emerged, more receptive to the industrial education philosophy of Booker T. Washington than to academic education for blacks. In their efforts to redirect the school's programs, the all-white board fired all the teachers including Bouchet in 1902 and replaced them with instructors committed to industrial education.

Over the next fourteen years, Bouchet held five or six positions in different parts of the county. Until November 1903, he taught math and physics in St. Louis at Sumner High School, the first high school for blacks west of the Mississippi. He then spent seven months as the business manager for the Provident Hospital in St. Louis (Nov. 1903-May 1904), followed by a term as a United States inspector of customs at the Louisiana Purchase Exposition held in St. Louis (June 1904-Oct. 1906). In October 1906, Bouchet secured a teaching and administrative position at St. Paul's Normal and Industrial School (later renamed, St. Paul's College) in Lawrenceville, Virginia. In 1908 he became principal of Lincoln High School of Gallipolis, Ohio, where he remained until 1913, when an attack of arteriosclerosis compelled him to resign and return to New Haven. Undocumented information has Bouchet returning to teaching at Bishop College in Marshall, Texas, but illness once again forced him to retire in 1916. He returned to New Haven, where he died in his boyhood home at 94 Bradley Street. He had never married or had children.

Bouchet's full impact on black education will never be known; that he had an impact is undeniable. Lillian Mitchell Allen remembered Bouchet from her childhood days in Gallipolis. Perhaps the most highly educated person in the area, he inspired both black and white young people with hitherto unknown goals, she said, noting that her brother, J. Arnot Mitchell, who graduated from Bowdoin College in 1913 and became the first black faculty member at Ohio State University, was influenced by Bouchet.

Edward Alexander Bouchet was born in New Haven, Connecticut on September 15, 1852, just twelve years before slavery of African-Americans ended in 1864. He graduated valedictorian of his class from Hopkins Grammar School in June 1870 and entered Yale College the following September. In June of 1874, he graduated from Yale College (B. A.) and he was elected subsequently a member of Yale's chapter of the Phi Beta Kappa Honorary Society. Two years later, in June of 1876, he received his Ph. D. degree in Physics from Yale College. His dissertation title was "Measuring Refractive Indices."

Dr. Bouchet's first job was at the Institute for Colored Youth in Philadelphia, Pennsylvania (later to become Cheyenne State Teachers college) where he taught Physics and Chemistry for 26 years. During the next six years (after leaving the Institute for Colored Youth), Dr. Bouchet held several positions as teacher and manager until he was appointed principal and teacher at Lincoln High School in Gallipolis, Ohio. He held this, his final position, for five years (1908-1913) until he returned home to New haven in ill health at the age of 61. He died in New Haven on October 28, 1918.

The Edward Bouchet Abdus Salam Institute (EBASI) of The Abdus Salam International Centre for Theoretical Physics (ICTP)
Posted by Mercury at 11:45 AM