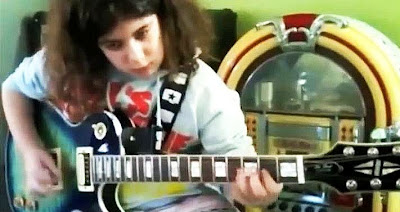 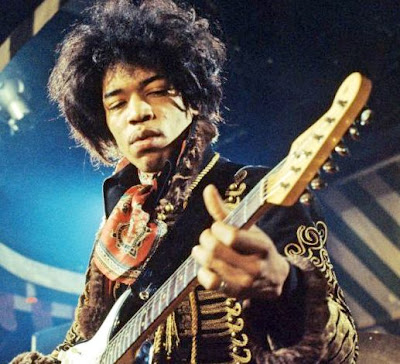 I don't think Jimi Hendrix has much to worry about. She's talented but from a totally different era. A 10 year old's visions of personal aspiration sometimes dissolves into the mundane.

It's an achievement only the most talented musicians can hope to gain - the highest guitar grade.

But for Ayla Gezmis it was a piece of cake - the 10-year-old is one of the youngest people in Britain to achieve a grade eight in the electric guitar.

Talented Ayla, who is nicknamed 'Mini Hendrix' by her music teachers, only took up the instrument when she started strumming her dad's guitar because she was bored at home two years ago.

And the youngster is already becoming a household name after posting videos of herself performing in her bedroom on YouTube which have attracted hundreds of hits.

Ayla, from Skellingthorpe, Lincolnshire, says her ambition is to become a lead guitarist and follow in the footsteps of her idols ACDC.

She said: 'Not that many girls play the guitar, it's kind of a boy instrument so I hope I can join a band and show that girls can play too.

'I want to start a band and one day be as big as ACDC.'

Ayla perfected her strumming skills after attending weekly lessons with Rockschool, which aims to help the nation's future musicians.

The syllabus is designed for pupils to sit a grade examination annually, but Ayla has already reached the highest level of graded music exams for the guitar after just two years.

Guitar tutor, Dan Clark said: 'When I first met Ayla she was a complete beginner, just about to turn eight-years-old but very quickly she was playing the tunes spot-on, straight away.

'That year she passed her Grade One with distinction which was pretty good progress already.

'I was thinking she's going to hit a brick wall trying to get the chords right, people are 18-years-old when they get to Grade eight but there was no stopping her.

Proud father Met Gezmis, 46, said: 'I love the sound of the guitar so suggested it as a good hobby for Ayla to do when she was bored at home one day.

'We started slow with short lessons and she picked it up very fast, practicing every day.

'I am very proud, I say if you start something you keep it up and she has worked very hard.

'We were all surprised she has progressed so fast, I'm pleased as it has cost me less, I should have been paying for lessons for eight years.'

As a reward for her incredible achievement, Ayla's dad has bought her a brand new Gibson guitar and she hopes to start her new band later this year.

Here she does a Chuck Berry fragment...