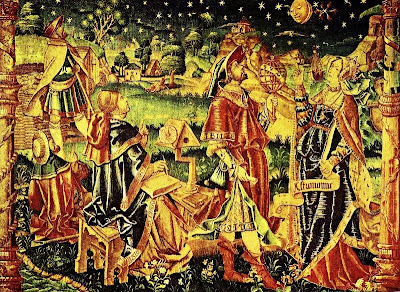 "The Astronomy of Shakespeare"

With all this talk lately of rocks whizzing by Earth (or crashing through the atmosphere), it’s remarkable that we didn’t even know of space rocks a few centuries ago. The first asteroid, 1 Ceres, was discovered in 1801.

Dial back a few centuries, and we were still in the realm of a perfect universe with the Earth at the center. William Shakespeare’s (1564-1616) plays are full of these references. Universe Today recently stumbled across a 1964 Irish Astronomical Journal paper replete with examples.

Shakespeare was born about 20 years after Nicolaus Copernicus, whose book De revolutionibus orbium coelestium (On the Revolutions of the Celestial Spheres) laid out the case for the Sun-centered solar system. It took a while for Copernicus’ theories to take hold, however.

While bearing in mind that Shakespeare often wrote about historical personages, one passage from Troilus and Cressida demonstrates an example of the characters speaking of the Sun following the other planets in circles around the Earth.


The heavens themselves, the planets, and this centre,
Observe degree, priority and place.
Insisture, course, proportion, season, form,
Office, and custom, in all line of order:
And therefore is the glorious planet Sol
In noble eminence enthroned and sphered
Amidst the other …

An Earth-centered solar system had its problems when predicting the paths of the planets. Astronomers couldn’t figure out why Mars reversed in its path in the sky, for example.

The real explanation is the Earth “catching up” and passing Mars in its orbit, but astronomers in Shakespeare’s time commonly used “epicycles” (small circles in a planet’s orbit) to explain what was going on. Shakespeare wrote about this problem in Henry VI:


Mars his true moving, even as in the heavens,
So in the earth, to this day is not known.

However, the Bard displayed a more modern understanding of the Moon’s movement around the Earth, the paper points out. The Moon’s distance varies in its orbit, a fact spoken about in Othello, although note that Shakespeare attributes madness to the moon’s movements:


It is the very error of the moon;
She comes more near the earth than she was wont
And makes men mad.

For more examples — including what Shakespeare thought about astrology — you can check out the paper  here .