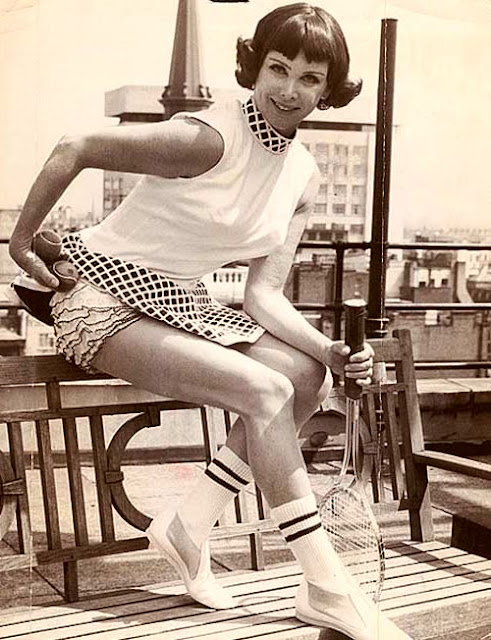 What does it take to break with tradition and buck the system? Obviously, there are many factors: A sharp, distinctive personality, innovation, a movement. Consider the maverick tennis player Gussie Mason, who passed away on January 16th this year. What is interesting is that eventually the norm will be challenged. Just remember that sexiness sells.

Moran entered several amateur tennis tourneys in California, eventually rising to eligibility to play at Wimbledon in 1949. Preparing for that appearance, she asked the official Wimbledon host, Ted Tinling, to design her outfit. She asked for one sleeve to be one color, the other sleeve to be another color, and the skirt to be a third color. Because of the tournament rule that all outfits had to be white only, he declined, but later agreed to design an outfit that complied with the rule. Her outfit, a short tennis dress with ruffled, lace-trimmed knickers, was short enough for her knickers to be visible during the match, a first for any tournament.

Her outfit drew considerable attention; reporters covering the event began calling her "Gorgeous Gussie", and photographers fought for positions where they could get low shots of Moran, with the hope of glimpsing the lace. The event scandalized Wimbledon officials, prompting a debate in Parliament. Moran, who was accused of bringing 'vulgarity and sin into tennis' by the committee of the All England Lawn Tennis and Croquet Club, later reverted to wearing shorts. Tinling, who had acted as official Wimbledon host for 23 years, was shunned for the 33 years following the incident (he was invited back to Wimbledon in 1982).


"Gussie Moran, a Tennis Star Who Wore a Daring Wimbledon Outfit, Dies at 89"

Gussie Moran, who as a ranked American tennis player in 1949 caused an international stir and gained worldwide fame for competing at Wimbledon while wearing a short skirt and lace-trimmed underwear, died on Wednesday at her home in Los Angeles. She was 89.

She had recently been hospitalized with cancer, Jack Neworth, a tennis writer and friend, said.

Moran’s daring outfit worn in a bastion of English propriety won her more renown than her tennis playing, though she was ranked as high as No. 4 in the United States, won the United States women’s indoor championship in 1949 and reached the quarterfinals that year at Wimbledon.

By the end of her life she had come to know hardship — bouncing from job to job, living in near squalor, telling of abortions and rape. At her death she lived in a small apartment. But for a time, more than half a century ago, she was a household name around the world. A racehorse, an airplane and a sauce were named after her.

Moran, who was 25 at the time, arrived in London for Wimbledon in June 1949 with a new outfit in mind, having already reached out to the British designer Teddy Tinling to create one.

“I wrote him a letter prior to Wimbledon, asking him if he would design me something with one sleeve one color, the other sleeve another color and the shirt another color,” Moran told The Orlando Sentinel in 1988. “He wrote back, ‘Have you lost your mind?’ ”

Tinling, a former tennis player and for many years the official Wimbledon host, told The Associated Press during the tournament that Moran had asked him to make her “look more feminine.”

Sticking to Wimbledon’s all-white dress code, Tinling came up with a white silk sun-top jersey with a tight waist and bodice and a short skirt that boldly bared her knees. Underneath were matching white silk jersey panties trimmed with two inches of open lace.

Moran displayed her outfit during a pretournament tea party at the Hurlingham Club, instantly inspiring a nickname. “Gorgeous Gussie’s Lace-Fringed Panties No. 1 Attraction on Wimbledon’s Courts,” a headline in The New York Times declared after the tea party preview.

By the time of her opening match, photographers were jostling for position, many lying flat, the better to catch the most risqué angle as she served the ball. They were not disappointed.

“The fringed panties are very much in evidence when Gussie races across the court or leaps for a high shot,” The A.P. reported.

Moran, who was noted for a powerful forehand, won her match, defeating Bea Walter of Britain, but it was her underwear that became front-page news and a subject of debate in the British Parliament. The All England Lawn Tennis and Croquet Club, the home of Wimbledon, accused Moran of “bringing vulgarity and sin into tennis.”

Although Moran did not wear the lace panties for the rest of the tournament, the sensation they caused made her one of the biggest attractions in women’s tennis. She made a cameo appearance in the 1952 sports movie “Pat and Mike” with Spencer Tracy and Katharine Hepburn. The newspapers reported on her romantic life. And her underwear, soon christened “Gussie panties,” started a trend. Women began taking to the court in lace panties, T-shirts and plunging necklines.

“Gussie was the Anna Kournikova of her time,” the former tennis champion Jack Kramer told The Los Angeles Times in 2002, referring to the Russian star and sometime model. “Gussie was a beautiful woman with a beautiful body. If Gussie had played in the era of television, no telling what would have happened. Because, besides everything else, Gussie could play.”

But there were negative repercussions, too. Wimbledon banned short dresses from the tournament. By 1950 there were grumblings among the tennis elite that the attention Moran had received was unmerited, in light of her being ranked seventh among American women at the time. In 1951 the United States Lawn Tennis Association banned lace panties and low-neckline attire from its tournament in Forest Hills, Queens, that would become the United States Open.

Tinling had to resign as official Wimbledon host and was not to be welcomed back until 1983, seven years before his death. In the meantime he had designed tennis wear for players like Chris Evert, Evonne Goolagong, Martina Navratilova and Virginia Wade. Tennis wear evolved as well, rendering Moran’s outfit relatively tame by today’s standards.

“Gussie wasn’t a revolutionary,” Tinling once told The Times. “She wore the dress for two reasons. She wanted to look good, and the shorter dresses allowed her to move more freely on the court.”

Gertrude Agusta Moran was born on Sept. 8, 1923, in Santa Monica, Calif., and grew up in a grand Victorian house overlooking the Pacific Ocean. Her father, Harry, was a sound technician at Universal Studios, and her mother, Emma, was a housewife.

Moran said she learned to play tennis when she was 11. While competing on a junior circuit, she and other young players were sometimes invited to play at Charlie Chaplin’s house on Sunday afternoons, trading volleys with stars like Greta Garbo and Olivia de Havilland.

During World War II, after her older brother was declared missing in action, Moran joined the war effort, going to work at the nearby Douglas Aircraft Company.

She was well into her 20s when she joined the amateur tennis circuit, in 1947, relatively late for a newcomer. But in nine months she won three major tournaments. Her victory in the National Indoor Tennis Tournament in March 1949 was on the wooden courts at the Seventh Regiment Armory in Manhattan, where she defeated Nancy Chaffee.

Moran retired from amateur tennis in August 1950 and signed a one-year, $75,000 contract to play on a professional tour run by Bobby Riggs.

Playing alongside Pauline Betz, Moran did not do well on the tour and left it after the year was up. She then began playing exhibition matches at military bases and hospitals as part of a tour managed by the tennis great Bill Tilden. She also joined a U.S.O. tour.

Moran went on to work in radio as a sports director and in television hosting interview shows, all in Los Angeles. She was also a radio sportscaster in New York on WMGM, marketed her own line of tennis clothes, wrote for tennis magazines and taught tennis. In 1970 she joined a U.S.O. tour in Vietnam and sustained broken bones when a helicopter in which she was riding was shot down. She continued to compete in tournaments into her early 40s, Neworth said.

She also publicly spoke of having abortions and of being found backstage beaten and raped during a Lawrence Welk concert at a Santa Monica centennial celebration. There was no arrest.

Moran had three marriages, none lasting more than two years. She had no children. In her later years she went from job to job, often living in reduced circumstances after losing her home in the 1980s. At one point, largely supported by friends and fans, she was reported to be living with cats in a single room in a run-down building in Hollywood, the curtains made of bedsheets. In recent years she sold her tennis memorabilia and autographs online.

At the height of her celebrity, Moran expressed frustration with all the attention she was receiving, some of it, in the gossip columns, exasperating. It was a Wimbledon title that she wanted more than anything else, she said.

“Publicity follows me,” she wrote in an article for The A.P. at the time. “I cannot help it if people cook up phony quotes about engagements with tennis players I’ve never even seen off the court. I am interested in clothes I can play tennis in, not in creating a sensation and certainly not in anything anyone at all would consider in poor taste.”