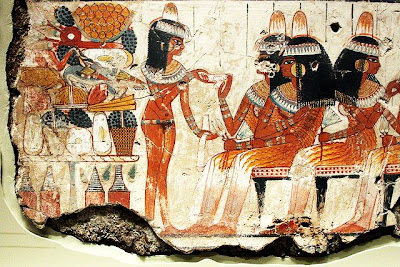 Scribbled on a wall at an old Luxor temple...NOT.

Pyramids, mummies, tombs, and other icons of aristocracy and the afterlife dominate our images of ancient Egypt. But love poems composed thousands of years ago may provide a more intimate glimpse of the lives of everyday ancient Egyptians.

"Poetry is perhaps the greatest forgotten treasure of ancient Egypt," said Richard Parkinson, an expert on ancient Egyptian poetry at London's British Museum, home to the largest collection of Egyptian artifacts outside of Cairo.

While historical accounts and biographies inscribed on the insides of tombs often give idealized accounts of ancient Egyptian life, poetry gives real insight into human nature and its imperfections, he said.

A group of love poems have been found in an excavated workers' village on the outskirts of the Valley of Kings, where many pharaohs are entombed. The verses allow poetry lovers and Egyptophiles alike to tap into the emotional side of Egyptian daily life. "People tend to assume all ancient Egyptian writing is religious, so the secular nature of these songs and of much other poetry continue to surprise readers," Parkinson said.

Written during Egypt's New Kingdom (1539-1075 B.C.) but likely composed much earlier, these songs are surprisingly direct about love and romance in ancient Egypt, using metaphors, repetition, and other poetic techniques familiar to poetry readers today.

To hear your voice is pomegranate wine to me:
I draw life from hearing it.
Could I see you with every glance,
It would be better for me
Than to eat or to drink.

From Hieroglyphics to Hymns

The earliest poetry in Egypt was likely part of an oral tradition. Hymns, stories, and prayers were passed down from speaker to speaker. It's likely that only one person out of every hundred could read and write, according to Jacco Dieleman, an Egyptologist at the University of California, Los Angeles.

The Egyptian hieroglyphic writing system was likely invented to help with trade, allowing merchants record their wares and account for their stock. Later hieroglyphic writing found on nobles' tombs gave biographical accounts of the tombs' occupants for passersby to read. Over time, longer biographies, narrative poems, and songs also began to appear.

To read ancient Egyptian poetry and other writings is a two-step process, Dieleman said. Much of the writing was done in hieratic script, a shorthand form of hieroglyphs. "When you have to write all of these beautiful [hieroglyphs] of birds, men, and women, it takes days to write a letter to your grandmother," Dieleman said.

To begin deciphering the ancient texts, Dieleman uses detailed photographs of excavated writings, along with his own observations of actual artifacts, if possible. He then translates hieratic writing into hieroglyphs. From there, he gives sounds to the hieroglyphic consonants and pieces out words, sentences, and entire passages.

Historical tales and hymns had been inscribed inside tomb walls, written on papyrus, and often scribbled onto shards of limestone pottery. "These shards are considered the scratch paper of the Egyptians," said Terry Wilfong, an Egyptologist at the University of Michigan.

Wilfong said that students in ancient Egypt inscribed many of the surviving examples of the culture's poetry. The students likely copied down poems from other texts and dictation as part of their lessons.

Love Poems From the Workers' Village

Archaeologists have discovered most of Egypt's love poetry in Deir el-Medina, a village of tomb builders during the New Kingdom. Here, many skilled artisans worked on the tombs of pharaohs such as Ramses II and Tutankhamun.

Findings indicate that these villagers may have been remarkably literate for their time. The local community—not just the scribes and students—may have contributed to the poetry of Deir el-Medina.

The love poems were likely set to music and used events from daily life and the natural world—growing grain, capturing birds, fishing along the Nile—as metaphors to talk about love.

I'll go down to the water with you,
and come out to you carrying a red fish,
which is just right in my fingers.

Women's voices were strong in Egyptian poetry—as the narrators of poems or as lovers making choices about their beloveds, for example. This strength confirms that women had a higher position in ancient Egyptian culture than in other societies at the time, Wilfong said. Women may even have written some of the poetry.

One of Wilfong's favorite poems, a harpist's hymn, celebrates life in a culture often thought to be purely focused on the afterlife. Dating from about 1160 B.C., this poem was found on the tomb of Inherkhawy, a supervisor of workers at the royal burial ground in the ancient city of Thebes:


The Harper's Song for Inherkhawy (Excerpt)

So seize the day! hold holiday!
Be unwearied, unceasing, alive
you and your own true love;
Let not the heart be troubled during your
sojourn on Earth,
but seize the day as it passes!

The British Museum's Parkinson still finds wonder and excitement in his favorite ancient Egyptian works. "The poems provide an archaeology of the emotions, a sense of what it was like to be Egyptian, which is otherwise inaccessible—the humor, the vivacity that lay behind the monuments," Parkinson said.
Posted by Mercury at 9:13 AM