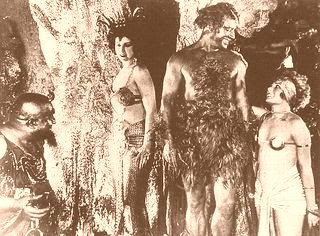 The Devil is up to no good in this 1926 silent film by Guido Brignone.

Maciste in Hell (1926) features a character originally portrayed by actor Bartolomeo Pagano in the Italian historical epic Cabiria (1914). Here Pagano as Maciste is a virtuous man of the 19th century who is confronted by the Devil (appearing in his Snidley Whiplash persona) in an attempt to sway him to hellish actions. The Devil does not succeed and seeks other means to defeat Maciste. He abducts Rosabel’s infant as Maciste attempt to convince it’s rich father to make good on his paternity. Maciste rescues the child. Furious, Maciste confronts the Devil, is captured, and is sent to Hell. The hordes of Hell conspire to keep Maciste there with a single kiss from one of the female conspirators. Maciste makes the mistake (as men are wont to do) and he is transformed into a demon. This frees the minions of King Barbariccia to attack the stronghold of King Pluto for unspecified revenge. Maciste battles on the side of Pluto, with his strength increased by his demonness a hundred-fold. Maciste defeats the army single-handed. Pluto transforms Maciste back to his mortal form and set on his way back to Earth but Proserpine laid a trap and captured Maciste in an attempt to keep him in Hell for herself. Her kiss turns him back into a demon and he is her prisoner for years. The prayer of Rosabel’s young child on Christmas Eve turns Maciste back to man and frees him from bondage forever.

The ridiculous portrayal of the Devil and his minions on Earth, as stereotypical moustached melodrama villains in black top hats and twirling black capes, seems out of place in this otherwise interesting examination of the virtuous Maciste in the netherregions. Many of the crowd scenes of the minions of Hell, and the special effects shots of flying demons and the gargantuan Lucifer, Nimrod and Minos make watching this film a treat. — Carl Bennett.

With the adventure hero genre and you got an idea of this surreal and visually dazzling masterpiece. Fellini called it "one of the 10 best films ever made" and convinced him as a kid to enter the film business.

After saving a child from a Faust-like character big macho goodhearted Maciste goes to hell and fight hordes of vicious demonic creatures. It's packed with violence, humor, nudity etc. Two scenes blew me away; at one point Maciste decapitates a demon but by some impressive reverse FX the creature picks up his battered head and put it back on his shoulders, in hell there's a giant Godzilla-sized satan who eat humans like peanuts!?! The set design is incredibly impressive, the use of color tinting is pure perfection, and the devil costumes are so detailed I've never seen anything like it.

One of greatest cinematic experiences I've ever had the pleasure of watching in a theatre!

Brignone's classic was just one of a dozen Maciste film made in Italy in the 1910s/20s, later Freda did a remake and Mario Bava was very inspired by this film to make his "Hercules In The Haunted World"