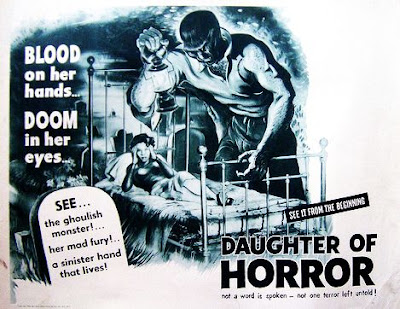 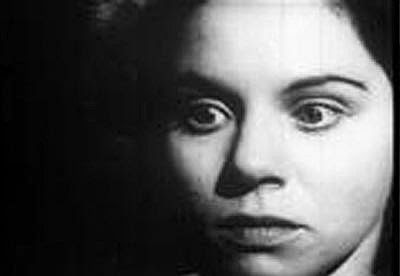 A strange film...Existential noir. It is the second version of the film Dementia. Daughter of Horror has a narrator [ Ed McMahon]. The music bed is by avant garde musician George Antheil, vocal solo by Marni Nixon, and a cool jazz score by Shorty Rogers and His Giants.

As the narrator invites us to explore the horrors of an insane mind, a young woman wakes from a nightmare in a cheap hotel room. We follow her through the skid-row night and encounters with an abusive husband; a wino; a pimp and the rich man for whom he panders; a flashback to her traumatic childhood (she killed her father after witnessing him murder her mother); violence; pursuit through dark streets... Again the young woman wakes up. Was it only another nightmare?

As the narrator invites us to explore the horrors of an insane mind, a young woman wakes from a nightmare in a cheap hotel room. We follow her through the skid-row night and encounters with an abusive husband; a wino; a pimp and the rich man he panders for; a flashback to her traumatic childhood; violence; pursuit through dark streets; dementia. Filmed in film-noir style throughout; only the narrator speaks.

This is one of those (exceptionally) rare very low budget films where you can see clearly that, if the director had had more time and more money, we would be discussing a classic "film".

Better known to buffs of the odd, the obscure, and the strange as "Daughter of Horror", in the tale as told we are witness to the unraveling of a mind. Like "Eraserhead", the best of this sub-genre, it is difficult to tell where the madness starts and where reality ends- or, indeed, if any of what we see on screen is real at all. It is hard to get any sense of what is occurring from the Gamine's point of view. Are the events happening to her? Is she dreaming? Hallucinating? The viewer (or, at least this viewer) is always a little off balance while watching this movie, and I think that that is what the director was aiming at.

I would go so far as to say that, within the budgetary constraints imposed, this movie is a masterpiece. As stated in the synopsis, this is a dark movie with no sympathetic characters, no attractive locales, no hope. Were it just a Film Noire murder story, it would still be a very good movie. As a descent into madness, it excels.

Dementia is the first American Freudian film. Not since G.W. Pabst's Secrets of a Soul has a motion picture probed to such depths the innermost recesses of the human psyche. In this case, the protagonist is a young girl with an Electra complex who takes out her hatred of all men (and revenges herself on one of them) because of her hatred for her brutal father.

Sadism manifests itself in two ways in the film — sexually and through violence. Adultery and murder are by-products of the girl's environment. Feeding like jackals on her sordid circumstances are a 'procurer' and his 'patron.' This is a nightmare world from which all good has been routed, leaving the girl enveloped in madness, like a protective cocoon.

Without a spoken word but clamorous with the sounds of a city that might be anywhere in the world, the girl, too psychotic to be reached by words, reacts only to 'neutral' sounds and distortions of 'everyday life,' whether they be the screeching of automobile brakes or the frenzied incantations of a jazz band. Dementia unfolds this case history with an inexorable mounting rhythm that reaches a paroxysm. Accompanying this Caligari-esque tale is a stunning musical score by George Antheil that seems to spring itself from some hidden recess in the girl's subconscious.

Dementia is a film that exists on two levels... for the two groups of film audiences. On either one, and on both, it is unique and truly (as has so often been falsely said before) unforgettable.

Shorty Rogers and His Giants