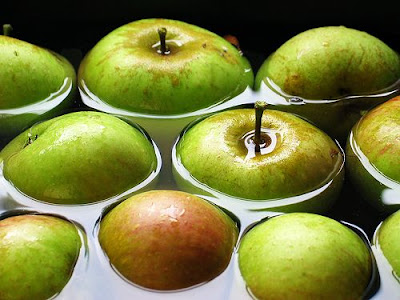 These are the targets. 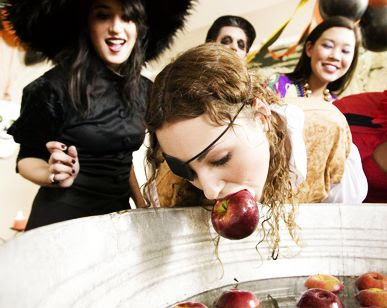 This is what is supposed to happen. Not easily done.

Apple bobbing, also known as bobbing for apples, is a game often played at Halloween. The game is played by filling a tub or a large basin with water and putting apples in the water. Because apples are less dense than water, they will float at the surface. Players (usually children) then try to catch one with their teeth. Use of hands is not allowed, and often are tied behind the back to prevent cheating. In Scotland, this may be called "dooking"," i.e. ducking. In Ireland, mainly County Kerry, it is known as "Snap Apple", and in Newfoundland and Labrador, "Snap Apple Night" is a synonym for Halloween.

The current game dates back to when the Romans conquered Britain, bringing with them the apple tree, a representation of the goddess of fruit trees, Pomona. The combination of Pomona, a fertility goddess, and the Celts' belief that the pentagram was a fertility symbol began the origins of bobbing for apples[citation needed]. When an apple is sliced in half, the seeds form a pentagram-like shape, and it is thought that the manifestation of such a symbol meant that the apple could be used to determine marriages during this time of year. From this belief comes the game bobbing for apples[citation needed]. During the annual celebration, young unmarried people try to bite into an apple floating in water or hanging from a string; the first person to bite into the apple would be the next one to marry. Historically, Baltimore, MD has held an apple bobbing competition in the first weekend of July. Mayor O'Malley won for 3 consecutive years.

The custom is mentioned (along with apples suspended on a string) in 18th century Ireland by Charles Vallancey in his book Collectanea de Rebus Hibernicis.

The current game is based on a New Year tradition, where whoever chokes on the apple first in the group will be the first to marry. The similar tradition of throwing rice at a wedding evolved from this, except apples were thrown originally. However, the popularity of throwing other types of fruits such as peaches and pears is believed to be making a comeback.

Girls who place the apple they bobbed under their pillows are said to dream of their future lover.

Now here comes the board of health and ruins everything...

Due to the nature of the game, whereupon a number of individuals each place their entire head into a bowl of water, it is thought to be a somewhat unsanitary game to play, and is therefore falling out of favour with some groups. A potentially more sanitary variation of the game exists, with the apples hung on string on a line, rather than in a bowl of water.


Some physics of "apple bobbing"

Not just for Halloween, but works good--"face painting"
Posted by Mercury at 7:07 AM

Email ThisBlogThis!Share to TwitterShare to FacebookShare to Pinterest
Labels: bobbing for apples, Halloween 2012