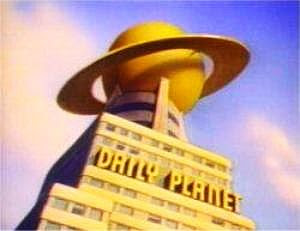 Alter ego Clark Kent is resigning from the post of star reporter at the Daily Planet, the Metropolis newspaper where he has worked since the first Superman comics were published in the 1940s.

DC Comics, which publishes the Superman stories, says Kent will walk out in protest that hard news has given way to too many "soft" entertainment stories.

The move has been prompted by the Daily Planet's takeover by a conglomerate.

The publisher has hinted that the Man of Steel might even go the way of many journalists and become a blogger, in an effort to get his views across to a wider audience.

"Why am I the one sounding like a grizzled ink-stained wretch who believes news should be about, I don't know, news?" says a disillusioned Kent, according to a leaked panel from Wednesday's edition of the comic that appeared on the Newsarama.com website.

New Superman writer Scott Lobdell told USA Today newspaper: "This is really what happens when a 27-year-old guy is behind a desk and he has to take instruction from a larger conglomerate with concerns that aren't really his own."

DC Comics' superhero turns back on print journalism to fight for truth, justice and the American way on the web

Journalism's future lies online – at least according to Superman's alter ego Clark Kent, who is about to quit his job at the Daily Planet and found a version of the Drudge Report.

In the new issue of DC Comics' Superman series, out tomorrow, Clark will stand up in front of staff in a "Jerry Maguire-type moment" which will see him resign from the Daily Planet and mourn "how journalism has given way to entertainment", writer Scott Lobdell told USA Today.

Clark will also call on his fellow reporters to stand up for truth, justice, "and yeah — I'm not ashamed to say it — the American way," said Lobdell.

"Rather than Clark be this clownish suit that Superman puts on, we're going to really see Clark come into his own in the next few years as far as being a guy who takes to the internet and to the airwaves and starts speaking an unvarnished truth," said Lobdell.

The Man of Steel is unlikely to be looking for a new employer, however. "I don't think he's going to be filling out an application anywhere," Lobdell told USA Today. "He is more likely to start the next Huffington Post or the next Drudge Report than he is to go find someone else to get assignments or draw a paycheck from."

Clark Kent has worked at Metropolis paper the Daily Planet since the 1940s, although Comic Book Resources notes he has left the company in the past, in 1971 becoming a news anchor.

"Superman is arguably the most powerful person on the planet, but how long can he sit at his desk with someone breathing down his neck and treating him like the least important person in the world?" asked the writer.
Posted by Mercury at 8:15 AM