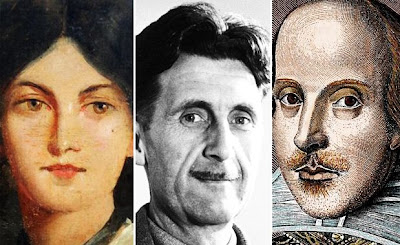 Is there a strange link between creativity and hypochondria? I've been reading Philip Larkin's Letters to Monica and his health concerns are pretty open ("can you get cancer by talking about it?" the poet wonders). So John Ross's book on great writers and their illnesses seemed a timely read.

Orwell's Cough is subtitled 'Diagnosing the Medical Maladies & Last Gasps of the Great Writers' and the book has its origins in lectures given by the Assistant Professor of Medicine at Harvard Medical School when, as an infectious diseases specialist, he used to pep up lectures with quotes from William Shakespeare (65 lines just from Timon of Athens allude to syphilis).

That sexually transmitted disease was rampant in 1990s literary London (sorry, 1590s literary London) after being brought to Europe by Columbus's crew on their return from Hispaniola in 1493. Shakespeare called it "the pox", and even the "Winchester Goose" (The Bishop Of Winchester used to be in on a cut of profits from the red-light district in Southwark).

Ross contemplates whether Shakespeare had syphilis, citing the writer's tremulous handwriting in his final six signatures. There is no definitive conclusion that the pox got the Bard but the chapter is certainly not for the faint-hearted, unless talk of 'penile auto-amputation' (a symptom of syphilis) fails to make you tremulous.

Nathaniel Hawthorne, author of The Scarlet Letter, didn't like doctors, unsurprisingly for someone who had broken his leg at the age of nine and had to endure the quack treatment of doctors pouring cold water on his foot from a second-storey window "in an exceedingly crude attempt to reduce inflammation".

Ross may not know this but 'Moby Dick' is Cockney rhyming slang for sick - and Herman Melville certainly warrants his place among this sickly lot. Ross says the author was bipolar, an alcoholic, rheumatic and probably suffering from post-traumatic-stress disorder. Oddly, the vast quantities of opium he took didn't seem to hep.

W.B. Yeats suffered from Prosopagnosia (the inability to recognise faces), which presumably came in handy on his death bed when the Irish poet, who had used Arsenic therapy for his fevers, had at his bedside his wife and two mistresses. Emily Brontë may have had Asperger syndrome (this seems likelier for the monosyllabic author of Wuthering Heights than for "charming conversationalist" Milton, for whom the same condition is attributed).

Finally, of course, there is George Orwell, who had measles, whooping cough, dengue fever and TB. The world of books got something out of his misery, though, as Orwell admitted that 1984 had "much to do with my illness".

It's an entertaining book and it seems appropriate to conclude with Spike Milligan's famous epitaph on his gravestone: 'I told you I was ill.' Shame Swift didn't get there first with that joke. 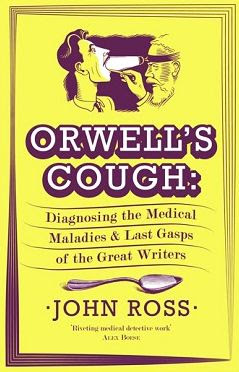 Orwell's Cough: Diagnosing the Medical Maladies and Last Gasps of the Great Writers