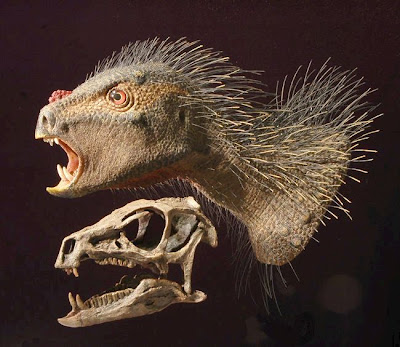 Not every dinosaur grew up to be a mighty predator like Tyrannosaurus rex or a hulking vegan like Apatosaurus. A few stayed small, and some of the smallest dinosaurs that ever lived — tiny enough to nip at your heels — were among the first to spread across the planet more than 200 million years ago.

Fossils of these miniature, fanged plant-eaters known as heterodontosaurs, or “different toothed reptiles,” have turned up as far apart as England and China. Now, in a discovery that has been at least 50 years in the making, a new and especially bizarre species of these dwarf herbivores has been identified in a slab of red rock that was collected in the early 1960s by scientists working in South Africa.

In a report published Wednesday in the online journal ZooKeys, Paul C. Sereno, a paleontologist at the University of Chicago and a dinosaur specialist, described the strange anatomy of the newfound member of the heterodontosaur family and gave the new species the name Pegomastax africanus, or “thick jaw from Africa.” He also apologized in an interview for not getting around sooner to this piece of research.

When he first viewed the specimen at a Harvard laboratory, Dr. Sereno said, “my eyes popped, as it was clear this was a distinct species.”

Embedded in the rock were remains of a creature with a short parrotlike beak, one-inch jaws, sharp teeth and a skull no less than three inches long. The entire body was less than two feet in length and probably weighed less than a small house cat.

“I’m embarrassed to say how many years ago that was — 1983,” he said. “But I was an enterprising graduate student then at the American Museum of Natural History. All the while since then, I wondered if anyone else might spot the creature hiding among the lab drawers.”

The Pegomastax fossils were eventually returned to the South African Museum in Cape Town, the true nature of the one slab still undiscovered, Dr. Sereno said. The main researcher responsible for collecting the fossils was Alfred Crompton, a Harvard professor now retired. Part of Dr. Sereno’s research was supported by the National Geographic Society, where he also is an explorer-in-residence.

His close examination showed that behind the parrot-shaped beak were a pair of stabbing canines up front and a set of tall teeth tucked behind for slicing plants. These teeth in upper and lower jaws operated like self-sharpening scissors, Dr. Sereno said, with shearing facets that slid past each other when the jaws closed. The parrotlike skull, he noted, may have been adapted to plucking fruit.

Dr. Sereno said it was “very rare that a plant-eater like Pegomastax would sport sharp-edged enlarged canines.” Some scientists suggested that the creature may have consumed some meat, or at least insects.

In his new study, Dr. Sereno concluded that the creature’s fangs, unusual for a herbivore, were probably “for nipping and defending themselves, not for eating meat.” Other aspects about the new species and other heterodontosaurs, including their chewing mechanism, are evolutionary surprises, he said, and “their anatomy is key to understanding the early evolution of this great group of plant eaters.”

Another possible characteristic of the new species, Dr. Sereno said, is that its body might have been covered in quills, something like those of a porcupine. If so, he pictured that in life Pegomastax would have scampered around in search of suitable plants, looking something like a “nimble two-legged porcupine.”
Posted by Mercury at 6:03 PM