A fun place to visit on Halloween 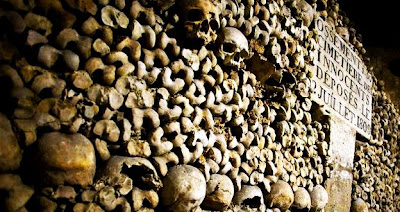 "Exploring the history of catacombs"

Beneath the city streets that travellers walk on each day, dark labyrinths of underground catacombs are passageways to the past, to a time when the ghostly tunnels served as burial grounds for millions of people.

The catacombs of Rome, which date back to the 1st Century and were among the first ever built, were constructed as underground tombs, first by Jewish communities and then by Christian communities. There are only six known Jewish catacombs and around 40 or more Christian catacombs.

In Ancient Rome, it was not permitted for bodies to be buried within the city walls. So while pagans cremated their dead, Christians, who were not legally allowed to practice their religion, turned to underground cemeteries, built beneath land owned by the city’s few rich Christian families. The Jewish population was already implementing this practice when Christians began doing so around the 2nd Century.

The use of catacombs in Rome expanded during the 2nd and 3rd Centuries, as the illegal religion of Christianity grew in popularity. Some areas of the tunnels even became shrines for martyrs buried there. But after Christianity was legalized in 313 AD, funerals moved above ground, and by the 5th Century, the use of catacombs as grave sites dwindled, though they were still revered as sacred sites where pilgrims would come to worship.

The Rome catacombs then fell victim to pillaging by Germanic invaders around the early 9th Century. As a result, relics of Christian martyrs and saints were moved from the catacombs to churches in the city centre. Eventually, the underground burial tunnels were abandoned altogether – only to be rediscovered via excavations in the 1600s.

Today, travellers from all over the world visit Rome to explore its 600km network of catacombs, spread out over five storeys underground near the Park of the Tombs of Via Latina. Dedicated to Christian saints, they are adorned with some of the earliest Christian artwork in the world, dating back to the 2nd Century, featuring paintings on the tunnel walls that depict ancient life. Sacred catacombs open to the public include the Catacombs of Priscilla (Via Salaria, 430), the Catacombs of St Callixtus (Via Appia Antica, 110-126) and the Catacombs of St Agnes (Via Nomentana, 349). The Vatican provides details on how to visit these and other holy burial sites. A few Jewish catacombs, including the catacombs on the Vigna Randanini and those in the Villa Torlonia, are also open to the public -- though some by appointment.

Centuries later in Paris, catacombs emerged as a creative and discreet solution to a dire public health problem. In the late 1700s, mass graves in the Les Halles district, such as those in the now closed Saints Innocents Cemetery, were overcrowded with improperly disposed of bodies , creating unsanitary conditions that led to the spread of disease. Saint Innocents was shut down, and in 1786 the Paris police moved all the remains buried in the cemetery to an underground network of ancient limestone quarries – the now infamous Catacombs of Paris, located south of the former city gate near Place Denfert-Rochereau.

The eerie tunnels -- a significant portion of which is open to the public as a museum -- took on other uses over the course of history. During World War II, for instance, some sections became hideouts for French Resistance fighters, while other areas were converted by German soldiers into bunkers. Today, Paris’s nearly 300km of catacombs lie 30m under the ground’s surface and still house the remains of around six million people.

The world’s longest network of underground tunnels, extending more than 2,400km, can be found in Odessa, Ukraine, where the catacombs were formed around the 1830s as a result of limestone mining. As in Paris, the tunnels were used as bunkers and hideouts by soldiers during World War II, and a portion of the catacombs is open to the public via the Museum of Partisan Glory.

The catacombs of Malta are designated as a World Heritage Site for their role in Paleochristian history. Carved from the rock underneath the city of Rabat, likely beginning around the 3rd Century, the tunnels show how rural family burials took place among Christian, Jewish and Pagan communities. The complex network of passageways provided graves for 1,000 people and extended over about 5,700sqkm. Heritage Malta provides information on visiting St Paul’s Catacombs located near St Paul’s Church and Grotto.

In Alexandria, Egypt, the Catacombs of Kom el-Shoqafa were originally built for just one rich family around the 2nd Century, but eventually housed more 300 mummies. Open to the public, the three-story tomb about 30m under the ground, features elaborate carvings illustrating scenes from Egyptian mythology, including one relief depicting the jackal-headed god, Anubis.

"Nosferatu"...the first and best
From the inanimate to the animate..."The Golem"

Some early dinosaurs..."The Lost World"
Posted by Mercury at 12:05 PM