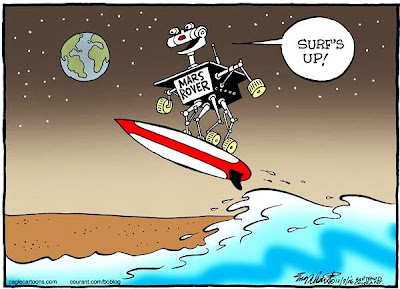 The Curiosity rover is preparing to scoop its first sample of Martian soil.

The vehicle, which landed on the Red Planet in August, has driven up to a pile of sandy material that mission scientists have dubbed "Rocknest".

This weekend, the robot will dig into the ground with its clamshell-shaped trowel, with the aim first of cleaning the mechanism of earthly contamination.

Later, it will repeat the task and deliver an aspirin-sized measure of sand to onboard labs for analysis.

Nasa engineers have cautioned that the whole process will be long and drawn out. The machinery involved is complex and the team says it needs time to learn how best to operate it.

Curiosity, also known as the Mars Science Laboratory (MSL), will very likely be stationary at Rocknest for a couple of weeks while the scoop tests are carried out.

And, as with some of the earlier science experiments conducted by the rover, the scoop results - when they come - are expected to be fairly mundane. The sand is very probably just the product of weathered basalt, the ubiquitous volcanic rock on Mars' surface.

The team is more concerned about getting its sample handling procedures right than making significant new discoveries.

A key objective of the first excavations will be to thoroughly clean the internal mechanisms of the robotic arm tool that does the digging.

It is called Chimra, or Collection and Handling for Interior Martian Rock Analysis.

Although assembled in ultra-sterile conditions at Nasa, this tool will still have acquired an oily film deposit in Earth air that would contaminate the rover's lab analysis results if left in place. By running several scoops through the handling system, Curiosity can scrub the film from Chimra.

"We effectively use it to rinse our mouth three times and then spit out," explained Daniel Limonadi, the Curiosity surface sampling phase lead at the US space agency's Jet Propulsion Laboratory (JPL).

"We will take a scoop bite, we will vibrate that sand on all the different surfaces inside Chimra to effectively sand blast those surfaces, and then we dump all that material out; and we rinse and repeat three times to finish cleaning everything out."

Once this procedure is complete, a tiny sample will be delivered to the onboard labs, Sam and CheMin, to run chemical and mineralogical analyses.

The sand will be severely shaken and sieved to make sure only fine-grained material, less than the width of a human hair in diameter, reaches the instruments.

The team will be mindful of the extreme difficulty a previous Mars mission, the Phoenix probe of 2008, had in getting material to go through its sample handling system.

"Phoenix had a relatively uncontrolled drop off capability; they had just the one scoop and that scoop had to do everything," Mr Limonadi told BBC News.

"We use gravity and vibration to get things into little parts of Chimra that make very controlled volumes of portions for us to drop off."

The rover has now driven at total of 484m (of about 1,590ft) since its 6 August landing on the floor of Gale Crater, a huge depression on Mars' equator.

It still has about 176m to travel to get to a location dubbed Glenelg, a place satellite images have indicated is a junction between three different geological terrains.

It is at Glenelg where Curiosity will really get down to the business of investigating past environments in Gale.

Last week, scientists announced the robot had taken pictures of rocks that were clearly deposited in fast running water. The theory is that the rover is sitting at the head of an ancient alluvial fan where a network of streams cut across the crater floor billions of years ago.
Posted by Mercury at 5:18 AM