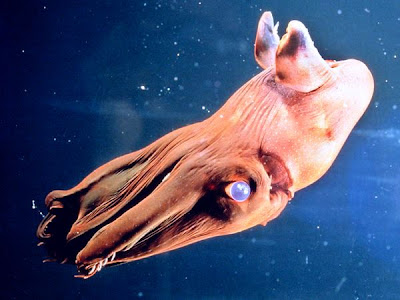 The squid with Count Dracula-like cloaks, turn out to be living fossils that feast on poo and other waste.

Vampire squid, which sport a Count Dracula cloak-like dark web, turn out to be living fossils that feast on poo and other marine waste enveloped in globs of mucus.

The scientific name for this unusual cephalopod is Vampyroteuthis infernalis, which translates to "vampire squid from Hell." This sole species of the Order Vampyromorpha lives between 2,000 to 3,000 feet below the ocean surface in waters with very low levels of oxygen.

Living fossils are animals that have been on Earth for ages, surviving all major extinction events and not seeming to change very much over millions of years. The eclectic diet of the vampire squid, described in a paper published in the latest Proceedings of the Royal Society B, likely hasn't changed much either.

For many years, the vampire squid has puzzled scientists, both because of this bizarre diet and because of its pair of long, slender threadlike appendages that dangle from the squid's body. The squid live in tropical and temperate regions of the world's oceans. They lack feeding tentacles, but they do possess eight arms.

To learn more about the cephalopod, Hoving and colleague Bruce Robison studied deep-sea video recordings taken from MBARI's remotely operated vehicles. They also conducted laboratory-based feeding experiments and did diet studies as well as examinations of the squid's filaments, arm suckers and other body features.

The analysis solved the long-standing mystery concerning the squid's pair of filaments and how this marine dweller eats.

"The vampire squid deploys a long filament- up to 8 times the animal's body size, and marine detrital matter falling through the water column adheres to the filament," Hoving explained to Discovery News. "The filament is retrieved between the arms of the vampire squid and the food is cleaned off."

"The suckers in vampire squid do not seem to have the sucking capacity as found in other cephalopods," he continued. "The suckers on the distal parts of the arms release mucus and they probably wrap the collected food in mucus, forming a food bolus, which is transported via fingerlike projections on the inside of the web to the mouth. Then the food bolus is ingested by the beak."

The squid is therefore the only cephalopod in the world that's not a predatory carnivore.

Instead, it's highly specialized to permanently inhabit parts of the oceans where oxygen concentrations are very low. The ability to survive under such tough conditions could help to explain how the squid lived through so many mass extinction events that wiped out numerous other species.

Richard Young, a biological oceanographer and professor emeritus from the University of Hawaii, is a leading expert on squid and octopi. Young told Discovery News that "the new findings are spectacular."

"Vampire squid have always had these really funny long things that stick out of their body, and scientists like me had no idea what they were used for. Now we know," he said, adding that this "is one peculiar critter. I would be shocked if any other marine organism ate in such a way."

As for whether or not the vampire squid is suitable for human consumption, Hoving said, "I would not eat them. Many marine predators, such as sperm whales and blue sharks, do eat them, though."