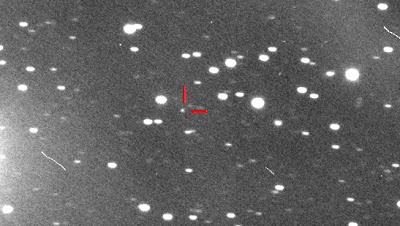 The astronomy world is all abuzz about the prospect of a newly discovered comet heading our way, that may be the brightest one to be seen during the past few hundred years. Most information available about comet C/2012S1 or (ISON) is speculative and subject to change or correction between now and the anticipated arrival date of November 2013. Here’s what we know so far:

1. Comet C/2012S1 or ISON was discovered jointly by astronomers Vitali Nevski and Artyom Novichonok last week when it was beyond the orbit of Jupiter and still required a large telescope to even detect it. The name, ISON, refers to the International Scientific Optical Network where the two discovery astronomers are employed.

2. Scientist have confirmed that the comet will pass about 1.1 million Km above the surface of the sun. This gives us speculation that the comet may not survive in it’s attempt to go around the sun and back out into space. If it does survive, it may come very close to the earth as it heads back into space. Estimated brightest time…….Christmas Eve, 2013, when it will pass close to the earth on its outward part of its orbit.

3. The orbital elements of ISON are so surprisingly similar to that of the Great Comet of 1680 (Kirch) that is has caused some speculation that the two bodies may be the same comet, and this is simply a return of Comet Kirch. Gottfried Kirch had discovered the comet on November 14, 1680, thus becoming the first person to discover a comet using a telescope.

4. From the "Dutch and Quaker Colonies in America", by John Fiske, "Late in the autumn of 1680, the good people of Manhattan were overcome with terror at the sight in the heavens such as has seldom greeted human eyes." When the Dutch settlers of New York saw the comet in late December of 1680, a letter published by Martin Schoonmaker in 1888, and written in December, 1680, stated, "Undoubtedly, God threatens us with dreadful punishments if we do not repent." The letter went on to suggest a day of humiliation and prayer. Dr. Edmund Halley (Halley’s comet fame) believed that the comet had previously appeared in 44 BC, 531 AD, and 1106 AD, and then in 1680 AD. This would give the orbit a period of 575 years, meaning it should not return again until 2255 AD. Lastly, William Whiston, a contemporary and disciple of the great Isaac Newton, believed that the comet of 1680 had literally grazed the earth after the fall of Eden, triggering Noah’s flood in 2346 BC.

5. Estimates at this time relative to the possible brightness of the comet are, 1,000 times brighter than Venus, or 10 times brighter than the full moon. If that becomes fact, it will light up the night sky for many months, and will easily be visible without optical aid during the brightest part of any day.

Mark your calendars for November1, 2013, and keep abreast of any changing news or updates relative to the orbit of Comet ISON…….or maybe it’s Comet Kirch?


"Newfound Comet Could Look Spectacular in 2013 "

A newly discovered comet has the potential to put on a dazzling celestial display late next year, when it will be so bright you may be able to see it briefly in the daytime sky.

The discovery of the object named Comet ISON was announced Monday (Sept. 24) by Russians Vitali Nevski and Artyom Novichonok, who detected it in photographs taken three days earlier using a 15.7-inch (0.4-meter) reflecting telescope of the International Scientific Optical Network (ISON), near Kislovodsk. The new comet is officially known as C/2012 S1.

When first sighted, Comet ISON was 625 million miles (1 billion kilometers) from Earth and 584 million miles (939 million km) from the sun, in the dim constellation of Cancer. It was shining at magnitude 18.8 on the reverse scale used by astronomers to measure the brightness of sky objects (the lower the number, the brighter the object). That makes the comet currently about 100,000 times fainter than the dimmest star that can be seen with the unaided eye.

But at its perihelion (its closest point to the sun), due on Nov. 28, 2013, the comet will come within 800,000 miles (1.2 million km) of the sun’s surface and could evolve into a dazzling object -- possibly bright enough to be visible for a short time in broad daylight.

The most exciting aspect of this new comet concerns its preliminary orbit, which bears a striking resemblance to that of the “Great Comet of 1680.” That comet put on a dazzling show; it was glimpsed in daylight and later, as it moved away from the sun, it threw off a brilliantly long tail that stretched up from the western twilight sky after sunset like a narrow searchlight beam for some 70 degrees of arc. (A person's clenched fist, held at arm’s length, covers roughly 10 degrees of sky.)

The fact that the orbits are so similar seems to suggest Comet ISON and the Great Comet of 1680 could related or perhaps even the same object.

Comet ISON will be barely visible to the unaided eye when it is in the predawn night sky, positioned against the stars of Leo in October 2013.

On Oct. 16 it will be passing very near both Mars and the bright star Regulus — both can be used as benchmarks to sighting the comet. In November, it could be as bright as third-magnitude when it passes very close to the bright first-magnitude star Spica in Virgo.

The few days surrounding the comet’s closest approach to the sun on Nov. 28, 2013, are likely to be most interesting. It will whirl rapidly around the sun in a hairpin-like curve and perhaps becomes a dazzlingly bright (negative-magnitude) object.

The comet will then whirl north after perihelion and become visible during December both in the evening sky after sunset and in the morning sky before sunrise. Just how bright it will be and how long the tail may get during this time frame is anybody’s guess, but there is hope that it could evolve into a memorable celestial showpiece.

And in case you haven’t checked your 2013 calendar, Nov. 28 is already a special day for those living in the United States: It is the Thanksgiving Day holiday.

Which leads to the question: Will Comet ISON be a dazzler, or a turkey?


"“Once in a Civilization” Comet to Zip past Earth Next Year"

As it flares out of the distant Oort Cloud, the newly discovered comet C/2012 S1 (ISON) appears to be heading on a trajectory that could make for one of the most spectacular night-sky events in living memory. Why is this comet expected to be so unique? Two reasons:

Astronomers predict that the comet will pass just 1.16 million miles from the Sun as it swings around its perihelion, or closest approach. (This may seem like a lot, but remember—the Sun is big. If we were to scale the Sun down to the size of Earth, the comet would pass well within the orbits of dozens of satellites.) The close approach will melt enormous amounts of the comet’s ice, releasing dust and gas and forming what should be a magnificent tail.

After it loops around the Sun and forms this tail, the comet should then pass relatively close to Earth—not near enough to cause any worry, but close enough to put on a great show. Viewers in the Northern Hemisphere will get the best view as the comet blooms in the weeks approaching Christmas 2013. The comet could grow as bright as the full moon.

Of course, comets have a habit of not living up to expectations. This one could be sucked into the Sun during its close approach, or not grow as much of a tail as astronomers hope.

But that hasn’t dampened enthusiasm for what Astronomy Now is awkwardly calling “a once-in-a-civilisation’s-lifetime” event. The comet expert John E. Bortle is already comparing ISON with the Great Comet of 1680, which, according to contemporary accounts, caused the people of New York’s Manhattan Island to be “overcome with terror at a sight in the heavens such as has seldom greeted human eyes….  In the province of New York a day of fasting and humiliation was appointed, in order that the wrath of God might be assuaged.”

Email ThisBlogThis!Share to TwitterShare to FacebookShare to Pinterest
Labels: astronomy, Comet ISON in 2013