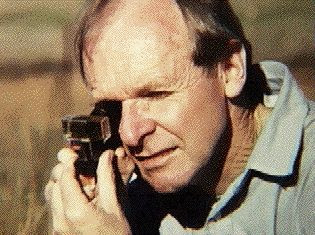 Bruce Russell born on January 6, 1936, a former high school biology teacher, began using a camera while serving as a consultant to a Bert Van Bork-led crew making 8mm science film loops for Encyclopaedia Britannica.  From 1968 through 1972, Russell honed his craft by designing and producing over 150 single-topic films for biology on topics ranging from micro-organisms, seashore invertebrates, and the classical experiments of biology. In 1973, he formed BioMedia Associates, an educational film company specializing in biology subjects, characterized by spectacular color close-ups of microscopic life forms, utilizing visually-arresting background colors.   From 1973 through 1979, along with associate J. David Denning, Russell produced 'Inhabitants of the Planet Earth,' a series of fifteen 16mm films on lower animals, for Ward's Natural Science.

From 1980 through 1986, BioMedia produced four major 16mm film series written and designed by BioMedia for Coronet Films: The Biological Sciences (7 topics,) The Atmospheric Sciences (6 topics,) Microbiology (2 topics,) and Cell Biology (6 topics.)   His Imaging a Hidden World -- the Light Microscope is highly recommended for showing how Russell manipulates light to show added depth and color to his film subjects.

Beginning in 1987 BioMedia began producing its biology topics in newer media formats and has since produced 50 programs for use in high school and college biology courses.  For ordering information, we encourage you to visit the BioMedia pages at: http://www.eBioMedia.com  in order to support the work of this extraordinary filmmaker.   BioMedia has also supplied hundreds of photos to biology text publishers, created poster sets for biology classrooms, and produced footage for theatrical productions (X Files, Millennium, Dark Skies).  One project , finished in 1998, was 'Eye of the Cyclops', a mixed animation/live action adventure for broadcast distribution. BioMedia's educational programs are sold by Carolina Biological, Ward's Natural Science and other leading classroom distributors. In addition, Russell is the co-inventor of the DiscoveryScope (www.discoveryscope.com) a hand-held microscope capable of also be used for photographing and videotaping micro subjects (over 200,000 sold so far), and is the author of a pictorial bioguide (Guide to Microlife).

Russell's 16mm work is phenomenal when seen on the "big screen", and constitutes a splendid argument for the visual qualities of film over videotape.   His films were among the most visually spectacular of any in the science film genre.  He unexpectedly passed away on December 20, 2006.

'Inhabitants of the Planet Earth' series, for Ward's Natural Science

His films for Coronet's 'Biological Sciences' , 'Cell Biology', and 'Microbiology' series include the following films, and are among the most significant --- from both educational and cinematic perspectives --- ever made in the genre.