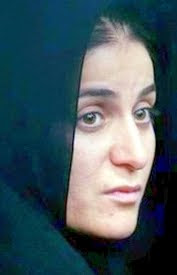 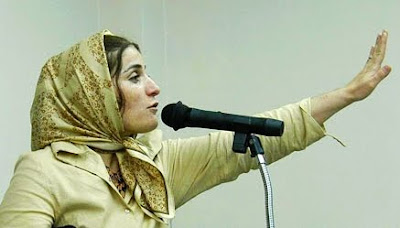 BBC NEWS
Iran has executed a woman sentenced to death for murdering the wife of a prominent footballer, her lawyer says.

International human rights groups have campaigned for her release since she was jailed more than eight years ago.

The execution is the 146th in Iran this year, according to AFP news agency.

On Tuesday, Amnesty International made a last-minute appeal for the sentence to be halted, saying Jahed had not received a fair trial.

Jahed, who had been living with footballer Nasser Mohammadkhani in Tehran under a temporary marriage, was found guilty of stabbing to death his first wife, Laleh Saharkhizan, in 2002.

She first confessed to the murder, but then retracted the statement in court.

According to the Irna news agency, Jahed prayed prior to the hanging and then burst into tears and shouted for her life to be spared.

Mr Mohammadkhani, a top Iranian footballer in the late 1980s who later became coach for Tehran's Persepolis club, was present at the execution, reports said.

In this case, Shahla Jahed's lawyer, Abdol-Samad Khoramshahi, says that he wasn't given the time he needed in order to make this appeal properly.

"According to the rules I should have been informed 48 hours before the execution so that I can go to the bereaved family asking them to forgive Shahla for the last time," he says.

Instead, Mr Khoramshahi only had a few hours to make the appeal. Just before the execution was set to take place, he and Ms Jahed's family held talks with the family of Laleh Saharkhizan - Ms Jahed's alleged victim. Reports say that judiciary officials joined in the appeals for mercy.

But the victim's family decided that the sentence should be carried out.

Shortly after five o'clock in the morning Shahla Jahed was led out to the gallows at Evin prison in Tehran and hanged.

Jahed had spent more than eight years in Evin prison.

The practice of a temporary marriage, known as sigheh, is allowed under Shia Islam.

It prevented Mr Mohammadkhani from facing charges of adultery, although he was sentenced to 74 lashes for drug-taking after the court heard he had smoked opium with his mistress.

He was initially suspected of complicity in the murder and jailed for several months, but released after Jahed's confession.

Malcolm Smart, Amnesty director for the Middle East and North Africa, said there were "strong grounds to believe that Shahla Jahed did not receive a fair trial, and may have been coerced into making a 'confession' during months of detention in solitary confinement".

"She retracted that confession at her trial but the court chose to accept it as evidence against her," he added in a statement.

The verdict was overturned in 2008 after the judiciary cited "procedural flaws" but Jahed was again sentenced to death in February 2009.

Iran has attracted international criticism over the separate case of Sakineh Mohammadi Ashtiani, an Iranian woman who was sentenced to death by stoning for adultery.

After campaigns for her release around the world, her stoning sentence was suspended, although she could still be hanged for murder.

Shahla Jahed, convicted of murdering the wife of an Iranian footballer, was hanged before morning call to prayer, reports say

The Guardian
An Iranian woman convicted of murdering the wife of her football player lover was hanged in Iran early today, state news agencies reported.

"A few minutes ago, Shahla Jahed was hanged in the courtyard of Tehran's Evin prison after 3,063 days of being kept in prison," the Fars news agency said.

Islamic Republic Student Agency (ISNA) said that Jahed was hanged at 5am, in the presence of the murdered wife's family. According to Iranian law, her life could have been spared if the family of the murdered woman pardoned her. Iran executes those sentenced to death before the Islamic morning call for prayer.

Jahed was found guilty of the 2002 murder of Laleh Saharkhizan, the wife of Naser Mohammadkhani, a football legend who rose to fame in the mid-1980s and coached Tehran's Persepolis club.

Jahed, who was held in Tehran's notorious Evin prison for nine years, was sentenced to death on the basis of her confession, which she later repeatedly retracted at her public trial.

Her execution is a defeat for human rights activists around the world who campaigned in the past nine years to stop Iran from carrying out her sentence. Last night, Amnesty International and several human rights campaigners called on Iran to stop her execution.

In 2008, the then chief of Iran's judiciary, Ayatollah Hashemi Shahroudi, ordered a fresh investigation and did not sanction her execution to be carried out. But today Iran defied the international and domestic outcry by hanging her.

Activists in Iran widely suspect that Jahed was forced to confess to the stabbing. Karim Lahidji, the president of the Iranian League for Human Rights, described her as "a victim of a misogynous society" and said: "Shahla Jahed has never had a fair trial in Iran and has always insisted that she is innocent. Although Sakineh Mohammadi Ashtiani's case is about adultery, her case is similar to that of Shahla Jahed because both are victims of the flaws of the Iranian judicial system."

He added: "We are approaching the Human Rights Day on 10 December and once again Iran is executing another woman. That's a clear signal that Iran wants to challenge the world on human rights issues."

Following the murder, Jahed was arrested as the prime suspect, but she refused to talk for nearly a year. Mohammadkhani was also imprisoned for several months on charges of complicity but was finally released after the authorities said Jahed had confessed to committing the crime alone.

Jahed told the judge at her public trial: "If you want to kill me, go ahead … if you send me back there [where her confessions were taken], I'll confess again and not only will I confess to killing her but I'd also confess that I killed those who have been killed by others." She then repeatedly reiterated that she was innocent and that she had not committed any crime.

Mohammadkhani was in Germany when the killing happened, but it emerged later that he was "temporarily married" to Jahed, a practice allowed under Shia Islam. Temporary marriage or "sigheh", as it is known in Iran, allows men to take on wives for as little as a few hours to years on the condition that any offspring are legally and financially provided for. Critics of the tradition see it as legalised prostitution.

In 2005 a documentary about her case and her affairs with the footballer showed footage from her public trial. The documentary, Red Card, was subsequently banned by Iran.

Nothing more on Sakineh Mohammadi Ashtiani.

Justice is on hold...maybe
Posted by Mercury at 9:47 AM