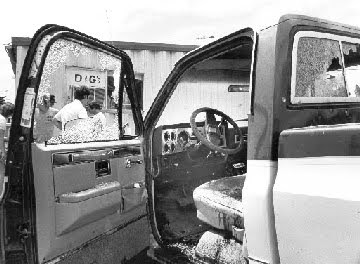 I do not live far from Skidmore and well remember the events.

"Town Mute for 30 Years About a Bully’s Killing"

The New York Times
SKIDMORE, Mo. — The murder of Ken Rex McElroy took place in plain view of dozens of residents of this small farm town, under the glare of the morning sun. But in a dramatic act of solidarity with the gunman, every witness, save the dead man’s wife, denied seeing who had pulled the trigger.

The killing was a shocking end for a notoriously brutal man who had terrorized the area for years with seeming impunity from the law until he was struck down in a moment of vigilante justice. It was also the first major case for a young county prosecutor, not far removed from law school and just months into the job, who said he was confident that the case would be solved soon.

But the silence of the townspeople held. Now, nearly 30 years later, that prosecutor, David A. Baird, is preparing to leave office with his first and most famous case still unsolved.

No one has ever been brought to trial in Mr. McElroy’s death, and, although there is no statute of limitations on murder, most people around here suspect that no one ever will be.

“Once the shroud of silence fell, there was going to be no one talking,” said Cheryl Huston, whose elderly father had been shot by Mr. McElroy and who watched the killing of Mr. McElroy from her family’s grocery store but, like the others, said she did not see the gunman. “They could have pushed and dug, pushed and dug and gotten nothing.”

“We were so bitter and so angry at the law letting us down that it came to somebody taking matters in their own hands,” she said. “No one has any idea what a nightmare we lived.”

As his long tenure comes to an end questions about the lack of resolution in the murder case — perhaps the most infamous in the area since Jesse James was shot nearby a century earlier — continue to follow Mr. Baird. He was charged with wading through the sensational details and moral ambiguities of the case to ensure that, in his words, justice was served.

But justice is a loaded term in a case that challenges the usual assumptions of victim and perpetrator. And Mr. Baird, all these years later, is still unwilling to give his own view on whether justice was served even though — or because — the killer was never tried.

“You could talk to everybody in this case, and they’d give you a different answer,” he said in an interview at his office in the red brick county courthouse in nearby Maryville. “I’m never going to answer that question. It’s never going to happen.”

Richard McFadin, 87, a lawyer, now retired, who represented Mr. McElroy in numerous cases and, after the killing, his widow, said he believed there was enough evidence for a prosecution. He believes one of the gunmen was the suspect named by the widow. “The town got away with murder,” Mr. McFadin said.

The police chief who oversaw the investigation, Hal Riddle, disagrees. He said that Mr. Baird pushed aggressively to bring a case to trial, but that investigators were never able to secure enough evidence to charge someone with a crime.

“If we could have proved who done it, he would have prosecuted him,” said Mr. Riddle, 72 and also retired, who describes the case as the most frustrating of his career.

The last three decades have been tough on this agricultural community of 342, about an hour and a half north of Kansas City. Like so many other small towns, Skidmore has shrunk inside itself, watching businesses close and residents depart.

Perversely, the town’s share of tragedy has grown. Road signs bear a picture of a young man who disappeared nine years ago and is feared dead. A memorial in the tiny downtown park displays the name of an expectant mother murdered six years ago, her fetus cut from her womb.

Even with these raw wounds, the memory of the nightmare surrounding Mr. McElroy — during his years of troublemaking and after a killing that many here feel was forced by an impotent criminal-justice system — continues to loom large.

“After all these years, people talk about it still,” said Marla Messner, 37, a restaurant manager who remembers being hurried inside her home for safety anytime Mr. McElroy came to town. “I think it’s something that’s going to define this town forever.”

Just months after Mr. Baird became county prosecutor — a post he was encouraged to take because “nothing exciting ever happens in Nodaway County”— he found himself in a courtroom for the first time with Mr. McElroy, who had shot an elderly Skidmore grocer in the neck with a shotgun. Known for stealing livestock, harassing women, destroying property and threatening lives, Mr. McElroy had been charged with numerous felonies over the years — his lawyer estimated at least three a year — but had never been convicted.

The streak ended when a jury convicted Mr. McElroy of second-degree assault in the grocer’s shooting. A conviction should have been a victory for the people of Skidmore, but the jury set a maximum sentence of two years, and the judge, without protest from Mr. Baird, released Mr. McElroy on bond pending appeal. Mr. McElroy was quickly rearrested after he appeared in town with a rifle, but he was again released.

When a court hearing was postponed, there was a meeting in town, with the mayor and the sheriff attending, to discuss Mr. McElroy.

Within hours, Mr. Baird heard that there had been a shooting downtown. He was sure it was Mr. McElroy who had done the shooting. It was hours before he learned that it was Mr. McElroy who had been shot, sitting in the front seat of his pickup truck alongside his wife, after picking up some beer at the town bar. Bullet casings from two guns were found. As many as 60 people were reported to have been at the scene, but not one of them would say who had wielded the weapons.

The local major-cases squad investigated, then the Federal Bureau of Investigation. Three grand juries heard evidence. But even after a federal prosecutor forwarded to Mr. Baird what he called “substantial” new evidence, no one was indicted. Instead of playing out in court, the details emerged in newspaper and magazine accounts, as well as a best-selling book, “In Broad Daylight: A Murder in Skidmore, Missouri,” which was later made into a television movie.

Reached by phone, Mr. McElroy’s wife, who has since remarried and left the state, said she was not interested in talking about the case.

Mr. McElroy has been dead for almost three decades now, a round number that has residents here bracing for the next round of visits by reporters. The bar that provided the backdrop for the shooting is closed and for sale for $20,000. The man identified by the widow as the main gunman recently died, something Mr. Baird raised in suggesting that the case may never be reopened.

And Mr. Baird lost his first election, in the Democratic primary this year, by just 25 votes, a loss noted by The Kansas City Star because of his connection with the case. He said he was not at all disappointed to leave office with the case still unsolved. “My experience is that trying a case is not always good at bringing closure,” Mr. Baird said.

As he packed up his office last week, he gave his successor a memo that listed a dozen or so unsolved cases in Nodaway County including, down toward the end, the killing of Mr. McElroy. “Just to be aware,” he explained.

His successor, Robert Rice, already knew how Mr. McElroy died. He grew up hearing the story. And he has already asked the sheriff’s office to re-examine some of the unsolved cases. But not that one.