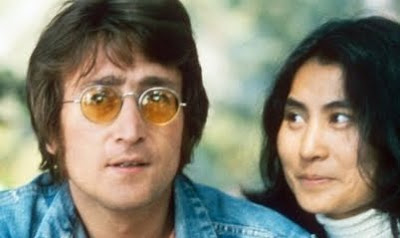 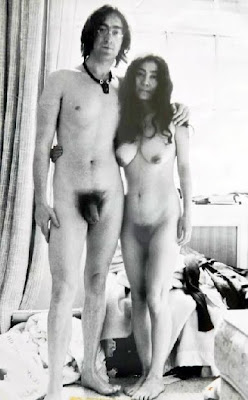 It is the public that determines iconography as with an Albert Einstein, a Carl Sagan or a Stephen Hawking. A few weeks ago PBS offered "Lennon Naked" a dramatization of a section of John Lennon's life. What a "dark" piece of drama with focus on Lennon's absent father and a hint of homosexuality. If you have the opportunity, watch the piece.

"Lennon's death: I was there"

BBC NEWS
On the evening of 8 December 1980 I was a young inexperienced journalist living in New York who'd recently arrived from London. I was totally unprepared for the drama that would unfold.

It began with a late night phone call from pop impresario Jonathan King, who was then a columnist for BBC Radio 1 living in New York. He told me he'd heard reports of a shooting outside the Dakota, Lennon's home, and that the former Beatle was possibly the victim.

Before long I was racing up 8th Avenue in a taxi and I arrived at the Dakota sometime after 11.00 pm bearing a tape recorder and notepaper.

There was an eerie silence - the street had been cordoned off - there were a couple of police cars outside the entrance to the Dakota - a few people had begun to gather.

Minutes before I arrived at the building, Lennon had been rushed to nearby Roosevelt Hospital - hauled over the shoulder of a policeman. Dr Stephan Lynn and his team at the emergency room worked frantically to try to bring him back to life.

A few days ago Dr Lynn told me exactly what was going on inside the resuscitation room. As he recalled: "He had no signs of life, no blood pressure, no pulse. He was unresponsive. We opened his left chest, I did it, with a scalpel. We made an incision.

Outside the Dakota I was trying to get in touch with my colleagues in Broadcasting House in London where it was before dawn.

There was no breakfast television in those days, radio ruled the morning airwaves but international communications were far from instantaneous. There was no internet, no email, no texting, no mobile phones, in many instances no direct dialling to London.

From a public phone booth not far from the Dakota I managed to get through to Today - the night editor told me to get whatever I could but to make sure I got back in touch by 6.30 am when the programme went on the air.

I returned to the crowd which was now growing rapidly. I recorded people's comments. Among the tearful and grieving was a young woman from Britain who said "I feel like I've been punched in the stomach". Those words summed up exactly how everyone felt.

I persuaded the night duty clerk in a building opposite the Dakota to let me use his telephone so I could feed the taped comments to London. Sending audio to London in those days was cumbersome.

You had to unscrew the mouthpiece from a telephone handset and then attach a special lead with crocodile clips - the other end of this lead connected to the output of the tape recorder. It was a precarious and tricky operation - but it worked that night.

The clerk wouldn't take any money for the gigantic phone bill I must have clocked up. He told me he didn't want any payment because he loved John Lennon and his music.

Pretty soon I was broadcasting live. I'd always been a big John Lennon fan. His music and lyrics had really engaged me.

On the air, the late Brian Redhead, who was co-presenting Today, pressed me for some detail and I remember finishing off his question with the words: "…..and now he's dead." I was pretty composed - but the finality of that statement got to me. I thought I might lose it.

I've kept some of the notepaper I used from that night. I had to file for the Radio 4 bulletins. Every time I'd write out a rough script the facts would change so there are all kinds of corrections.

There's a lot of scrawl - it began to get messy. It was stressful and the story was very emotional.

The crowd was expanding exponentially. Soon it was several hundred strong. People arrived at the Dakota in tears, bearing candles, they sang Lennon songs, it became an all-night vigil.

A few days ago I learned that for one of Lennon's famous acquaintances - American singer-songwriter James Taylor - the violence of that night came very close to home: "It seems amazing to me now, but I lived in the building one up from the Dakota and I heard him shot - five, just as quick as you could pull the trigger, about five explosions. And his assassin had button-holed me in the tube station, the subway stop, right in front of 72nd Street the day before.

"The guy had sort of pinned me to the wall and was glistening with maniacal sweat and talking some freak speak about what he was going to do and his stuff with how John was interested, and he was going to get in touch with John Lennon. And it was surreal to actually have contact with the guy 24 hours before he shot John."

It took Yoko Ono some time before she began to talk publicly about the night. I interviewed her just before the second anniversary of Lennon's death in 1982.

To her it seemed like her famous husband was still among the living. In a composed voice she told me: "He's still alive, he's still with us, his spirit will go on. You can't kill a person that easily, that's the way I feel about it."

Sean Ono Lennon, Yoko Ono's son by John Lennon, was only five when his father was killed. He was at home in the Dakota when it happened.

The anniversary of Lennon's death has brought forth an outpouring of unadulterated admiration from both his fans and some of the biggest names in the music business.

U2's front man Bono, who was passing through New York at the time of the shooting, says: "I just know I wouldn't be standing without him, and my whole life as an artist was kind of shaped by him and I can't exaggerate enough the effect his music had on me."

Lennon probably wouldn't be happy with all this retrospective praise.

In one of his last major print interviews published in Playboy he said: "I don't have any romanticism about any part of my past. I don't believe in yesterday. I'm only interested in what I'm doing now."

John Lennon may not have wanted to dwell on his past but judging from all anniversary tributes, millions of us remain, 30 years after his death, intensely interested in him and his music.

The New York Times
JOHN and I are in our Dakota kitchen in the middle of the night. Three cats — Sasha, Micha and Charo — are looking up at John, who is making tea for us two.

Sasha is all white, Micha is all black. They are both gorgeous, classy Persian cats. Charo, on the other hand, is a mutt. John used to have a special love for Charo. “You’ve got a funny face, Charo!” he would say, and pat her.

“Yoko, Yoko, you’re supposed to first put the tea bags in, and then the hot water.” John took the role of the tea maker, for being English. So I gave up doing it.

It was nice to be up in the middle of the night, when there was no sound in the house, and sip the tea John would make. One night, however, John said: “I was talking to Aunt Mimi this afternoon and she says you are supposed to put the hot water in first. Then the tea bag. I could swear she taught me to put the tea bag in first, but ...”

“So all this time, we were doing it wrong?”

We both cracked up. That was in 1980. Neither of us knew that it was to be the last year of our life together.

This would have been the 70th birthday year for John if only he was here. But people are not questioning if he is here or not. They just love him and are keeping him alive with their love. I’ve received notes from people in all corners of the world letting me know that they were celebrating this year to thank John for having given us so much in his 40 short years on earth.

The most important gift we received from him was not words, but deeds. He believed in Truth, and had dared to speak up. We all knew that he upset certain powerful people with it. But that was John. He couldn’t have been any other way. If he were here now, I think he would still be shouting the truth. Without the truth, there would be no way to achieve world peace.

On this day, the day he was assassinated, what I remember is the night we both cracked up drinking tea.

They say teenagers laugh at the drop of a hat. Nowadays I see many teenagers sad and angry with each other. John and I were hardly teenagers. But my memory of us is that we were a couple who laughed.


John Lennon, God, icons...realization of the self

"Across The Universe"
Posted by Mercury at 4:23 PM

i thought him a bit unrealistic but a good man and part of something that changed the face of music...but he did not deserve what happened to him...not at all

When I read the Yoko's statement, I felt so sad. Losing a lover and best friend like that must be earth shatteringly terrible.

Personally, I don't like her singing (her artwork is pretty cool though) and sometimes I think she's off her nut but she was such an inspiration and blessing to John, and I think they were quite cute together.

I get so mad when I think about John's death, how senseless and violent it was, you know. But I guess that's the way things work out some times :(