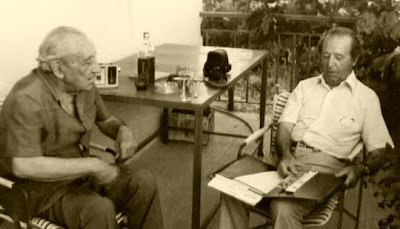 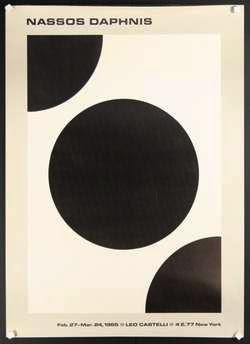 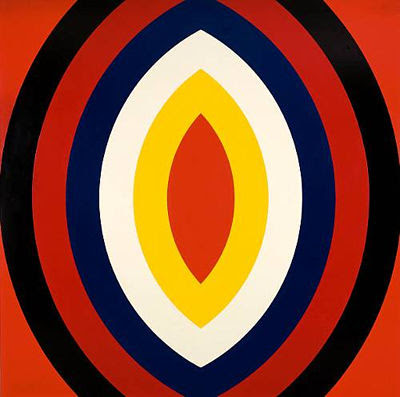 "Nassos Daphnis, an Artist of Geometry, Dies at 96"

The New York Times
Nassos Daphnis, a Greek-American artist who deployed brilliantly colored geometric forms in precise formal relationships to create nervous, dynamic paintings on a heroic scale, died on Nov. 23 in Provincetown, Mass. He was 96 and lived in Manhattan.

The cause was Alzheimer’s disease, his son, Demetri, said in announcing the death last week.

Mr. Daphnis, a florist by early training and a renowned cultivator of hybrid tree peonies, drew on his sensitivity to color and his keen understanding of nature’s geometry to develop a precise, hard-edged painting style that harked back to Mondrian and looked forward to minimalism. Its dynamism depended on the tense juxtapositions of primary colors arranged in rectangles, squares and curved lines to create what he called “vibrations.”

The critic Brian O’Doherty, reviewing a 1961 show at the Leo Castelli Gallery in The New York Times, called Mr. Daphnis “a modern purist concerned with the almost scholastic dialogue of pure colors imprisoned in bands and rectangles.”

Nassos Panagiotis Daphnis was born on July 23, 1914, in Krokeai, near Sparta, in Greece. He emigrated to the United States as a teenager and worked at his uncle’s shop in Manhattan’s flower district, where, in his spare time, he drew the plants around him. He struck up a friendship with another florist’s assistant, the sculptor Michael Lekakis, who offered him the use of his studio.

His first works were naïve paintings of remembered Greek scenes and episodes from classical myth, on display in his first show, at Contemporary Arts on 57th Street, in 1938.

In 1942 he was drafted into the Army, which put him to work camouflaging trucks in Italy and making large-scale topographical maps in Germany.

The devastation inflicted on the Italian countryside inspired him to create dark, surreal landscapes, thickly painted with a palette knife, after his return to the United States. While spending summers at artists’ colonies in Rockport, Mass., and Provincetown, he began painting biomorphic abstractions, with a Technicolor palette, based on the marine life he observed.

On a visit to Greece in 1950, Mr. Daphnis underwent a kind of visual conversion, dazzled by the intensity of light that seemed to transform color into flat planes.

At a time when Abstract Expressionism placed a premium on psychological intensity and spontaneous mark-making, he coolly arranged color in precise, controlled patterns on the canvas. In his color-plane theory, black commanded a forward position, with blue, red and yellow progressively receding toward white, which represented infinity.

“The important thing for me was to place the color in its proper plane, which I feel is the only way that a color can exist,” he said in an oral history interview for the Smithsonian Institution’s Archives of American Art in 1964.

His work was ignored until Leo Castelli gave him a one-man show in 1959 that established him as a leading exponent of geometric abstraction.

In the mid-1960s Mr. Daphnis embraced curves and spheres, whose possibilities he exploited with unflagging invention.

“The Continuous Painting,” first exhibited in 1975, created a gallery-filling environment of modular paintings of four-pointed stars. The canvases, each more than nine feet high, formed an unbroken series that measured more than 86 feet in length.

In the mid-1990s, Mr. Daphnis put his spheres into visual orbit. In “Energies in Outer Space,” a show at Castelli, saucer-shaped disks hovered over pinstriped fields. In a simultaneous show at the Andre Zarre Gallery, “Matter in Outer Space,” solid-seeming discs, like the rings of Saturn, floated near black and turquoise planetary forms.

Mr. Daphnis enjoyed equal fame in the gardening world. Indeed, he often said that he had two careers, as an artist and as a horticulturist, a pursuit that began in the late 1930s when William Gratwick, a renowned breeder of hybridized tree peonies, bought one of his first paintings.

Mr. Gratwick invited him to paint the tree peonies at his experimental nursery in Pavilion, N.Y., and Mr. Daphnis soon became a partner in developing new crossbreeds, which he named after artists or characters from Greek mythology. His work yielded some of the most esteemed varieties grown today, including Hephestos, Nike, Pluto and Gauguin.

In addition to his son, of Manhattan, he is survived by a daughter, Artemis Daphnis of Ossining, N.Y., and a brother, Demetrios, of Jamaica, Queens.
Posted by Mercury at 6:24 AM