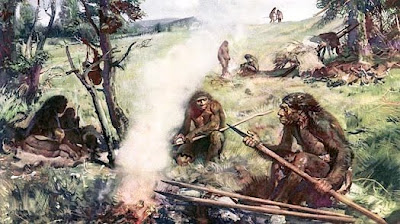 An interesting story. I often wondered how many lives were lost before ancient man realized which plants were poisonous, medicinal, and tasty and the same with hunting technology or even sex and communication.

Researchers in the US have found grains of cooked plant material in their teeth.

The study is the first to confirm that the Neanderthal diet was not confined to meat and was more sophisticated than previously thought.

The research has been published in the Proceedings of the National Academy of Sciences.

The popular image of Neanderthals as great meat eaters is one that has up until now been backed by some circumstantial evidence. Chemical analysis of their bones suggested they ate little or no vegetables.

This perceived reliance on meat had been put forward by some as one of the reasons these humans become extinct as large animals such as mammoths declined due to an Ice Age.

But a new analysis of Neanderthal remains from across the world has found direct evidence that contradicts the chemical studies. Researchers found fossilised grains of vegetable material in their teeth and some of it was cooked.

Although pollen grains have been found before on Neanderthal sites and some in hearths, it is only now there is clear evidence that plant food was actually eaten by these people.

"We have found pollen grains in Neanderthal sites before but you never know whether they were eating the plant or sleeping on them or what."

Professor Alison Brooks, from George Washington University, told BBC News: "We have found pollen grains in Neanderthal sites before but you never know whether they were eating the plant or sleeping on them or what.

"But here we have a case where a little bit of the plant is in the mouth so we know that the Neanderthals were consuming the food."

One question raised by the study is why the chemical studies on Neanderthal bones have been wide of the mark. According to Professor Brooks, the tests were measuring proteins levels, which the researchers assumed came from meat.

"We've tended to assume that if you have a very high value for protein in the diet that must come from meat. But... it's possible that some of the protein in their diet was coming from plants," she said.

This study is the latest to suggest that, far from being brutish savages, Neanderthals were more like us than we previously thought.
Posted by Mercury at 6:44 AM