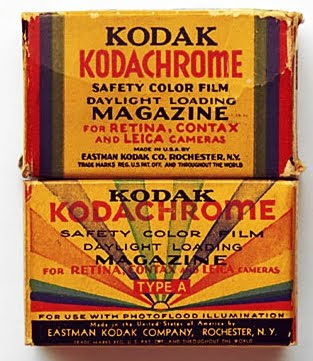 All good things must come to an end. Eastman will dump Kodachrome film as it has done many other products like the fantastic Blue Toner [contained uranium nitrate that could actually make red prints], fabulous black and white printing papers [Extalure, Portraitlure], 8mm, super 8mm, and 16mm movie film, and quality B&W still films [Panatomic X, Royal Pan]. The standard, classic photography industry will eventually die. And the winner is "digital".

The World's First Consumer Color Film was Used in 100s of Iconic Shots; After Dec. 30, It Won't Be Sold or Processed Anywhere

CBS Sunday Morning
Professional photographer Kent Miller is up before sunrise making sure everything's perfect for his photo shoot. He wants to capture a triathlete named Carlos Lema at the foot of the George Washington Bridge just across the river from Manhattan in just the right light at dawn.

His film of choice, as it has been for millions of others, is Kodachrome.

"Kodachrome is probably the first professional film I ever really shot," Miller said.

A professional photographer for more than 20 years, Miller shoots mostly digital now. But this is a job for film, and not just any film - Kodachrome.

"It just reproduces colors in a way that most other films never did, and it lasts forever," Miller said. "It's something that is difficult to do with just shooting digital until you bring it in to Photoshop and resaturate and do all your work in there. But just straight out the camera it doesn't have that density and dynamic ranges as the Kodachrome does just naturally."

For 75 years, Kodachrome has given millions of us those "nice bright colors" referred to in Paul Simon's 1973 hit.

The first mass-marketed color film, it was popular enough not just to inspire its own song, but to have a state park in Utah - Kodachrome Basin - named after it as well.

It was the film of choice for professionals documenting history as well as generations of amateurs preserving their summer vacations and holiday memories on Kodachrome slides.

Todd Gustavson is the curator of technology at the Eastman House - Kodak's museum in Rochester, N.Y.

"It's a baby boom product," he said. "After World War II - availability of new automobiles, national parks were open - and people were able to have some time to travel and of course now there is a this new color film which you could use to document your family vacations and then of course come back and show your friends and neighbors your slides on your carousel or Kodak slide projector."

But eventually technology caught up to Kodachrome. In a digital world, there was not enough demand for Kodak to keep making the film. And even if you have a roll or two squirreled away in your fridge, after this coming Friday - December 30 -you, or Kent Miller or anyone else - won't be able to get it developed.

Because on December 30th, Dwayne's Photo in Parsons, Kan. will stop processing Kodachrome. "So what," you say? You'll just send yours somewhere else? No you won't.

Maybe the best person to explain is Dwayne Steinle himself, who started the business 56 years ago.

"There is not going to be any place to process it?"

And Kodachrome isn't a do-it-yourself kind of film. Those long-lasting brilliant colors are the result of a unique developing process involving special chemicals only Kodak makes - or made to be more precise.

It isn't something you can develop in your basement darkroom.

"The real difference between Kodachrome and all the other color films is that the dyes that make up the image you see in the film, in Kodachrome, don't get incorporated into the film until it is actually developed," explained Grant Steinle, who now runs the business his father started .

They're sad at Dwayne's, but not at all surprised. They've been watching their Kodachrome business shrink, even as other labs stopped processing Kodachrome and Dwayne's became the only place people from around the world could send their film to be developed.

They're still doing 700 rolls a day, but that's not nearly enough demand to convince Kodak to make more chemicals. They've got just enough for another week.

Steve McCurry captured one - the 12-year Afghan girl on the cover of National Geographic in 1984. Actually, he captured two, when he returned to Afghanistan and found her 17 years later.

"Kodachrome was my mainstay film, this was the main film I used for 30 year," McCurry said. "I have about 800,000 Kodachrome transparencies in my archive, maybe more, and this was probably the greatest film ever made."

When Kodak announced it was discontinuing Kodachrome last year, he had an idea.

"I called my contacts, my friends at Kodak and said you know I'd really like to get the last roll and do a project with it to kind of honor this passing of this iconic film," he said.

He picked a region in India where he'd come across the perfect subjects.

He used most of the last roll of Kodachrome ever made, but saved just a couple of frames, which he shot in parsons just before dropping the film off at Dwayne's.

The very last image ever made with Kodachrome is a civil war cemetery in Parsons, Kan.

"I was going to the lab in the next 15 or 20 minutes and I drove past the cemetery and I thought this would be a sort of perfect ending to the roll of Kodachrome - a cemetery," McCurry said. "It's a passing of an era."

"Progress" is defined as an advancement or improvement, but in some ways it's hard to see how a world without Kodachrome qualifies as either.

But that's the world Steve McCurry will soon live in, whatever hope his wishful thinking allows him to preserve. He says he still has a few rolls in his fridge.

"Just open the fridge and there's the film and I'll know its safe and sound," he says. "If they ever bring it back I'm ready to roll."
Posted by Mercury at 10:37 AM