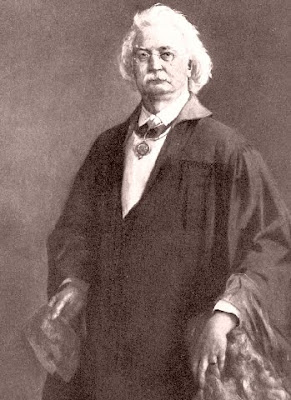 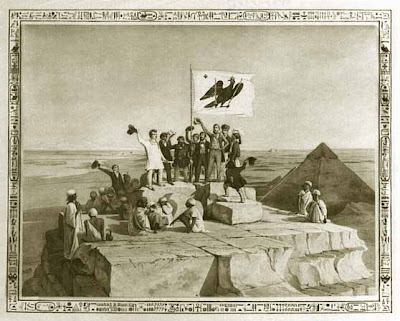 I dedicate this to my London colleague [an Egyptologist] who has been stalled for hours with her retired Oxford don father at Heathrow Airport do to bad weather. They are on their way to Luxor for a few weeks.

Karl Richard Lepsius was a "German Egyptologist, a founding father of scientific methods in archaeology whose plans, maps and drawings of tomb and temple walls are of high accuracy and reliability. In 1842, he headed a team of carefully chosen specialists on a four year expedition to the Nile Valley sponsored by King Fredrich Wilhelm IV of Prussia. Lepsius explored Khartoum and Sennar, during which he collected 15,000 artifacts and dispatched for display in Berlin. In winter 1844-45, Lepsius travelled throughout the Valley of the Kings, recording numerous scenes and inscriptions. He returned in 1866 and found the Canopus decree at Tanis. Being written in two languages, it was a valuable cross-reference for the prior interpretation of the Rosetta stone by Champollion."

Jimmy Dunn
Karl (Carl) Richard Lepsius (1810-1884) must be considered one of the founding fathers of Egyptology and a giant among the earliest archaeologists. He was born in Naumburg-am-Saale. During the days before formal Egyptology graduate programs, he spent years studying Champollion's Grammar in order to learn hieroglyphs, and then spent another four years visiting all of the major European collections of Egyptian antiquities in England, Holland and Italy in order to self educate himself in his chosen discipline. This is not to say that Lepsius was not formally educated. He studied Greek and Roman archaeology at the universities of Leipzig (1829-1830), Gottingen (1830-1832) and Berlin (1832-1833), where he completed his doctorate. His interest in Egyptology seems to have been inspired by lectures on the history of Egypt by Jean Letronne, a French classicist and archaeologist who had taken an early interest in the work of Champollion.

Though attracted to the study of Egyptology, Lepsius actually resisted concentrating on the Egyptian language until the appearance of Champollion's Grammar, when it became possible for him to undertake a systematized approach to its study. He made a comparison of the various systems of translation then in use, in an attempt to find to his satisfaction the one that was most likely to be correct. Then, in 1836, he visited Ippolito Rosellini in Italy, who had led the Tuscan contingent attached to Champollion's expedition to Egypt. This resulted in his publication, prior to even his first visit to Egypt, of Lettre a M. le Professeur Rosellini sur l'aphbet hieroglyphique in 1837. This work expanded on Champollion's explanation of the use of alphabetical signs in hieroglyphic writing.

This culminated, in 1842, with a commission by Fredrich Wilhelm IV of Prussia, proposed by Johann Eichhorn who was then Prussia's minister of instruction and endorsed by scientists Alexander von Humboldt and Robert Wilhelm Bunsen, for Lepsius to lead an expedition to Egypt and Nubia. As with earlier expeditions, he was tasked with recording monuments and bringing back to Germany many of the treasures he might discover. Included in his team were an artist named Joseph Bonomi and an English architect named James Wild, together with surveyors, other artists, draftsmen and a plaster molder. In fact, his was the best equipped and qualified of any scholarly group to follow the French Egyptologists in the entourage of Napoleon's military campaign in Egypt forty years earlier.

In those days, before modern aviation, Alexander was usually the entry point for visitors to Egypt, rather than today's Cairo. The expedition gathered there in September of 1842, and in early November, arrived in Cairo. There, they spent six months exploring Giza, Abusir, Saqqara and Dahshur. Lepsius later explained the importance of this work by noting that, with the exception of the pyramid studies of Richard H. Vyse and John S. Perring, and the minor visits to the area by the French-Tuscan expeditions, his expedition was the first to study and record what was essentially material from the Old Kingdom. Today, it is impossible to study the pyramids of Egypt without finding many references to Lepsius, because they discovered the remains of some 67 pyramids and more than 130 tombs of the nobles.

In May of 1843, the expedition settled in the Fayoum near the remains of the Labyrinth (the Pyramid of Amenemhat III). They remained there for several months, carrying out excavations and in the process, making the first detailed plans of that monument. From there, they traveled through Middle Egypt with stops at a number of sites such as Beni Hasan and Bersheh, as they made their way up the Nile River. Not surprisingly, they only briefly visited Thebes (modern Luxor), because at that time, the custom of explorers was to move swiftly up the Nile and then examine in more detail the monuments on the return journey downriver.

Soon he entered what was then called Ethiopia, actually Upper (southern) Nubia, and his work there was the earliest thorough investigation and modern record of that area. He took a small contingent of his expedition from the main party at Khartoum and ascended the Blue Nile past Sennar, not only to explore but also to make a study of regional languages.

On the return journey downriver, they indeed made a prolonged visit to Thebes. They camped for four months at Qurna, on the West Bank, to investigate the tombs and temples and then spent another three months on the eastern bank at the temples of Karnak. During this visit, Lepsius himself made a side trip to the Sinai by way of the Coptos road.

After leaving Thebes, the group made lengthy stops at the principal antiquity sites on their way back northward. Even in the Nile Delta, they explored as far east as Tanis. Leaving Egypt they returned to Europe along the eastern shore of the Mediterranean by way of Beirut, Damascus, Baalbek and Constantinople (Istanbul), arriving at Trieste in January 1846.

It is important to note that Lepsius' first expedition did not only contribute to our knowledge of Egyptian monuments, the Egyptian language and mythology, but to the geography of this region. With a carefully chosen team of specialists, Lepsius was able to take more time and care in investigation and recording than anyone had before him. The expedition was instrumental in adding depth and detail to any further understanding of Egyptian antiquities.

Upon his return to Prussia, his findings were published in a monumental work called Denkmaler aus Aegypten und Aethiopien (1849-58), a twelve volume series of books, with five volumes of text and nearly nine hundred plates, that was comparable in scale to the very formidable work of Napoleon's Description de l'Egypte. Actually, the text did not appear until after Lepsius' death, when Edouard Naville and others compiled his notes. Today, it remains a fundamental resource for Egyptologists on both monuments in Egypt and Nubia. The plans, maps and drawings of tomb and temple walls are of a high degree of accuracy and reliability, and are often the only record of monuments that have since been destroyed or later reburied.

His work was sweeping, and particularly important because it described many sites that have deteriorated today. It is important for modern enthusiasts of Egyptian antiquities to understand just how important work by such men are even in our modern era. Many inscriptions, tombs scenes and other material that would otherwise be lost to us today were, at the hands of this gifted Egyptologist, recorded for prosperity. Time and again, modern scholars must refer back to such work for there investigations, and in fact, some of the most important finds in more recent times came about because of his work. Hence, Professor Geoffrey Martin's rediscovery of the tombs of Maya, Tutankhamun's treasurer, and the king's general, Horemheb (prior to becoming Pharaoh himself), were made possible by surveys and descriptions made by Lepsius of the New Kingdom tombs at Saqqara.

This is not to say that Lepsius, along with other early Egyptologists, were not to blame for some amount of needless destruction. Champollion, Ippolito Rosellini and Lepsius, all scholars, were responsible for disfiguring many monuments of Egypt by the brutal removal of entire sections of decorations. Certainly Lepsius was not the worst, but he contributed to this destruction. The artifacts that he returned with after his first expedition included a dynamited column from the ill-fated tomb of Seti I, and sections of tiled wall from Djoser's Step Pyramid at Saqqara. Both were presents from Muahmmad Ali in thanks for a dinner service presented to the Egyptian king by the Prussian king. While one might argue that this material might have otherwise been lost, even at that time there were less intrusive methods of recording such decorations.

For his work, Lepsius was rewarded in 1846 with a professorship at the Berlin University, and in 1865 with the post of Keeper of the Egyptian Antiquities Department in the Berlin Museum. Some months later he led another expedition to Egypt. This time, he explored the Delta, which was and continues to be under-investigated and the Suez region. At Tanis, he discovered the Canopus Degree, a document written in Greek and Demotic which proved most useful to scholars because it could be compared with the Rosetta Stone.

In 1869, he visited Egypt for the last time in order to witness the inauguration of the Suez Canal.

Lepsius died in 1884 in Berlin, but he published many more works during his later years, and was even the editor of the leading German Egyptology journal, the Zeitschrift fur agyptische Sprache und Altertumskunde. For many years, this was considered to be the most important early periodical journal on Egyptian antiquities. He is also credited, for example, with providing the modern title, "The Book of the Dead", to the famous book of spells and he published one of the earliest studies of the Cubit rods.

Lepsius' work did more to put Germany, and particularly the Berlin Museum, on the map in the field of Egyptology. The antiquities and 15,000 casts that Lepsius brought home from Egypt formed the nucleus of the Berlin Museum's Egyptian collection. Probably more importantly, he has been called the father of modern Archaeology, and is at least considered the founder of the "German school" of methodical research on language, antiquities and archaeology of ancient Egypt.

Karl Richard Lepsius [Wikipedia]
Posted by Mercury at 7:30 AM