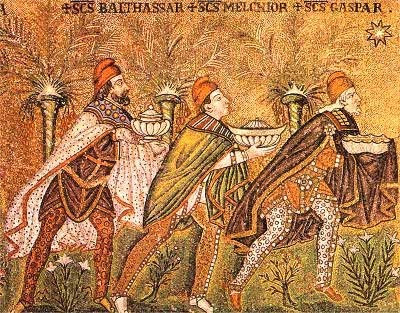 "Were the Three Wise Men from China?"

USA TODAY
The story of the Three Wise Men is one of the most familiar and beloved parts of the Christmas story. But for all of their popularity, the mysterious travelers from the East — known as the Magi — appear in only one short passage in the New Testament, following a star to the site of Jesus' birth and bringing gifts of gold, francincense and myrrh. Many religious scholars aren't even sure they really existed.

Brent Landau, a professor of religious studies at the University of Oklahoma and an expert in ancient biblical languages, found references to a text about the wise men in writings from the Middle Ages and learned that a collector in the 18th century had discovered in a Turkish monastery a manuscript called "the Revelation of the Magi" with a narrative about the wise men. He gave it to the Vatican Library, where the document, written on vellum, a type of parchment made of animal skin, remains archived away in virtual obscurity.

As part of his doctoral dissertation at Harvard Divinity School, Landau spent seven years translating and analyzing the text, written in Syriac, a language used by early Christians throughout the Middle East and Asia — and which he happened to be studying. He worked from both a 1927 published text in Syriac and the original document at the Vatican.

Landau's book, Revelation of the Magi: The Lost Tale of the Wise Men's Journey to Bethlehem (HarperOne) describes the Magi as an ancient mystical sect descended from Seth, the pious and virtuous third son of Adam and Eve. From Seth they inherited a prophecy of "a star of indescribable brightness" someday appearing and "heralding the birth of God in human form." This same star had initially hovered over the Tree of Life in the Garden of Eden.

Among the book's other revelations:

•The Magi are described as coming from a land called Shir, "located in the extreme east of the world, at the shore of the Great Ocean." In other ancient texts, Shir is referred to "as a place where silk comes from," says Landau, suggesting that the references were to China.

•In Syriac, the word Magi means "to pray in silence." Landau says it has no relationship to magicians or astrologers, sometimes cited in stories today.

•The text names 12 Magi, not three, while other parts of the text suggest that "a group the size of a small army" traveled to Bethlehem, says Landau.

Of the many early Christian documents recently discovered, Magi "is by far the most fascinating," writes John Dominic Crossan, professor emeritus at DePaul University, in a comment on the book's back cover.

"Landau is to be congratulated for bringing this important and unexpectedly influential work to light," adds Jennifer Knust of Boston University School of Theology, in another comment.

Although the text claims to be personal testimony, "it seems unlikely that it could have been written by the Magi themselves," Landau says. He cites a number of anachronisms, such as references to Christian writings recorded years after Jesus' death.

Who then wrote the wise men story?

"One guess," says Landau, "is some kind of religious community of Christian mystics."

The fact that the Magi are described as standing for days at a time on top of a sacred mountain, visiting a purifying spring, and seeing visions after eating certain foods could suggest that this was a way for a community to talk about itself and give it some authority by putting it in the mouths of the Magi, he says.

In addition to offering a detailed account of the life and background of the wise men, the text sheds some light on how some early Christians experienced Christ, Landau says.

When they first encounter the long-prophesied star, the text says it initially appears in a celestial form that then transforms into a human form or "star child," who instructs them to go to Bethlehem to witness its birth. Each of the Magi, in fact, sees the star child in a different form, with each vision representing a different time in the life of Christ. Nowhere in the text is the name Jesus Christ used to designate the Magis' celestial guide, suggesting that they experienced Christ and became followers without ever knowing the savior figure by that name, Landau says.

This speaks to the "universality of Christ's revelation," says Landau, an Episcopalian.

What should everyday readers take from this retelling, especially during the Christmas season?

An appreciation for the "imaginative way in which early Christians engaged" the story of the wise men to make it their own, says Knust. They "loved this story enough to write this version."

Christians carry on that same tradition today, whether through Christmas pageants, or songs, or art. "We continue to re-imagine the significance of the Christmas story in a way that is meaningful to the people," she says. 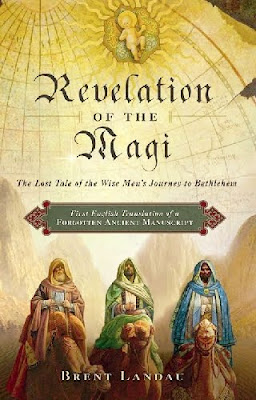 Revelation of the Magi: The Lost Tale of the Wise Men's Journey to Bethlehem

When i read the title, i'd thought i was going to see a confirmation of my beliefs that these were indeed monks from acnient china seeking the latest dali lama. That is, i originaly heard that idea watching a BBC special many years ago i believe. It was very convincing. O well, more religous bs it is then! I'm used to it. I can cope. Thanks for giving a rational view of it though :)

The "wise men" presentation is probably more mythology than anything else but consider Chinese Christianity.

"The Jesus Sutras: Rediscovering the Lost Scrolls of Taoist Christianity" by Martin Palmer

With no integration of the religious significance other than "tis the season", it is interesting to discover the event associated with the birth of the historical Jesus--the alleged "Star of Bethlehem". Real or an addition to add to the story? Sorting out the verifiable facts and the historical time span is a bit complex. It is known that King Herod ["Herod the Great"] fits into this time slot and King Herod was even mentioned in Matthew. Now [debatable] King Herod died sometime in 4 B.C. Scholarly research has even placed King Herod's death at 1 B.C.. I'll leave all of that the historical and theological scholars for it gets quite complex when consulting documented historical references and interpretations.

This is the only Biblical reference found in Matthew--Luke mentions nothing about the "star". [Note: Both books were written 80-90 years after the event.]

"In the time of King Herod, after Jesus was born in Bethlehem of Judea, wise men from the East came to Jerusalem, asking, "Where is the child who has been born king of the Jews? For we observed his star at its rising, and have come to pay him homage.""

"Then Herod secretly called for the wise men and learned from them the exact time when the star had appeared. Then he sent them to Bethlehem, saying, "Go and search diligently for the child; and when you have found him, bring me word so that I may also go and pay him homage." When they had heard the king, they set out; and there, ahead of them, went the star that they had seen at its rising, until it stopped over the place where the child was. When they saw that the star had stopped, they were overwhelmed with joy."

Okay, now to the astronomical ideas. Again, we are dealing with a culture over two thousand years old and definitions and attitudes towards astronomy was different. Such is the definition of a star which could mean a meteor, comet, or the conjunction of planets. However you look at it, it was bright. Comets can be ruled out for they were associated with bad events--not a good thing with the positive aspects of a Jewish messiah. Meteors move too fast and short of duration. So, what's left? Planet conjunctions. It just so happens that there were two events [planet conjunctions] that happened within that time span: Triple conjunction of Jupiter and Saturn in Pisces in 7 B.C. and near-conjunction of Mars, Jupiter, and Saturn in Pisces in February 6 B.C.. These would produce a bright fixture in the heavens. And the Jews placed a lot of astrological significance in the events of Saturn and Jupiter. The first planet conjunction happened around 7 B.C. in May when the Babylonian "Wise Men" [astronomers/astrologers of the highest rank] may have begun their sojourn. The second planet conjunction happened a few months later in September when the Wise Men were visiting King Herod and set his paranoia into motion with their revelation that a new king was at hand. Stories get twisted for the actual number of "Magi" was never given at first and later stated as three. Their status changed too. And, they were ignorant of the ethnicity of the "new king". Nevertheless, and despite the historical speculations, it is quite possible that the "Star of Bethlehem" was a conjunction of several planets.