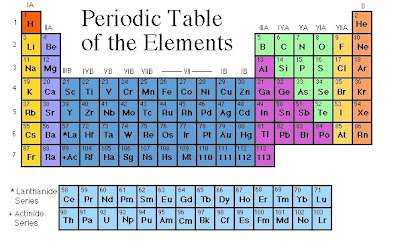 "Atomic weights of 10 elements to be altered"

The adjustments planned for the Periodic Table of the Elements will more accurately reflect the nature of 10 types of atoms, including carbon, nitrogen and oxygen.

Los Angeles Times
That imposing, yellowing chart gracing the walls of every science classroom is about to get an update. The adjustments planned for the Periodic Table of the Elements will more accurately reflect the true nature of 10 kinds of atoms — carbon, nitrogen and oxygen among them — that play a key role in such real-world issues as detecting counterfeit food, tracing pollutants in rivers and nailing baseball players sneaking steroids.

The Commission on Isotopic Abundances and Atomic Weights at the International Union of Pure and Applied Chemistry has decided the time has come to ensure that the figures listed on the official Table of Standard Atomic Weights properly indicate the variability that exists in nature.

The new table will reflect the fact that boron atoms can have atomic weights ranging from 10.806 to 10.821, depending on where in the world the element originates.

"It is important to set the record straight," said chemist Tyler Coplen, director of the U.S. Geological Survey's Reston, Va., Stable Isotope Laboratory, a coauthor of the report, which is to be published in the journal Chemistry International in March.

Of course, the periodic table has been edited in the past to account for the discovery of new elements. When it was first devised 140 years ago by Russian chemist Dmitri Mendeleev, only 63 elements were listed. Now there are 118 and scientists are searching for more.

And you thought you already had a lot to remember.

Still, fiddling with the atomic weights is bound to be unsettling for the generations of high school students and teachers who regard them as sacrosanct constants of nature.

The exercise is not entirely academic. Precise measurement of isotopic ratios can be used to determine the purity and source of all kinds of chemical substances. For example, counterfeiters often try to pass off Indonesian or Chinese honey as high-grade New Zealand honey, but measurement of the ratio of carbon isotopes of the honey can readily identify its origin.

Coplen said that one of his favorite stories involved truckers who were bringing orange juice concentrate from Florida to Kansas City, reconstituting it and selling it to grocery stores as fresh. Isotopic analysis of the water, he said, "showed that it was KC tap water," and the case ended up in court.

Another chemistry commission is currently assessing the boundaries for several other elements, including helium, nickel, copper, zinc, selenium, strontium, argon and lead. Coplen said changes could be made for at least some of those as soon as next summer.
Posted by Mercury at 7:48 AM

Weight has always made a difference.
7 years before Mendeleev "originated" the periodic table, Alexandre-Emile de Chancourtois put together the idea of the periodicity of the newly weighed elements into the best form of a periodic arrangement, in a spiral on a rotatable tube.
Mendeleev came up with the flat table to facilitate printing in a book.
Only now is a 3-D periodic table again popular - the Alexander Arrangement of Elements.