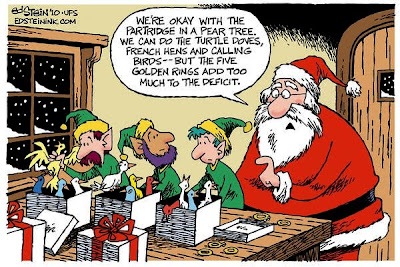 CBS News
In the unlikely event that your Christmas list this year includes every item mentioned in "The Twelve Days of Christmas," be prepared to pay nearly $100,000.

Trying to buy the 364 items repeated in all the song's verses - from 12 drummers drumming to a partridge in a pear tree - would cost $96,824, an increase of 10.8 percent over last year, according to the annual Christmas Price Index compiled by PNC Wealth Management.

Jim Dunigan, managing executive of investment for PNC Wealth Management, said that's because the whimsical holiday price index looks at a much smaller group of goods and services. Even within the index itself, there are some goods that have seen small increases and others that have seen larger ones, he said.

Also, gold prices are high - which pushed the cost of five gold rings up 30 percent to $649.95 - as was the cost of hiring entertainers. Not to mention the birds.

"The good news is that the economy is improving, and we are starting to see some pockets of price increases, as long as the total basket is controlled," he said.

The most expensive item on the list was $6,294.03 to hire nine ladies dancing, a 15 percent increase from last year. The cheapest was $12 for one partridge, a 20 percent increase.

PNC Financial Services Group Inc. checks jewelry stores, dance companies, pet stores and other sources to compile the list. Some of its sources this year include the National Aviary in Pittsburgh and the Philadelphia-based Pennsylvania Ballet Company.

The annual index is also used in middle and high schools across the country to teach economic trends.
Posted by Mercury at 7:23 AM