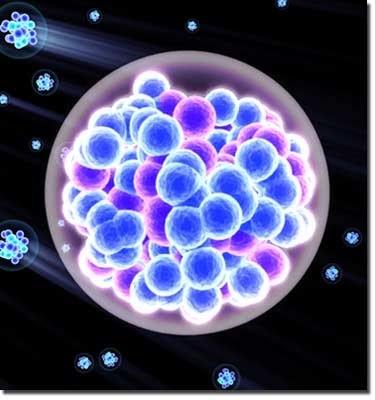 The claim sounds simple enough: Physicists in Japan say they have made a new superheavy atom, element 113, which lies at the border of the periodic table. However, the backstory is far more complicated. And it illustrates just how arcane the business of spotting new superheavy elements can be.

It's not the first time physicists have claimed the discovery of element 113. A collaboration of researchers from Lawrence Livermore National Laboratory in California and the Joint Institute for Nuclear Research in Dubna, Russia, reported production of the element in 2003. The Japanese team, which is based at the RIKEN Nishina Center for Accelerator-Based Science in Wako, made a similar claim in 2004. But neither of those results was conclusive, researchers say. The RIKEN team now makes a "very strong case," says Christoph Düllmann, a nuclear chemist at the GSI nuclear research lab in Darmstadt, Germany. "We clearly have to congratulate them. This has taken years and years of work." Others say they are reserving judgment on who should get the credit for the discovery.

An element's chemical identity is set by the number of protons in its nucleus—its atomic number. All elements with an atomic number greater than uranium's 92 don't exist naturally on Earth and must be produced in nuclear reactors, nuclear explosions, or by using particle accelerators. The tradition is that whichever lab makes a new element gets to suggest its name and hence we already have dubnium (element 105), darmstadtium (element 110), and berkelium (element 97) after the Lawrence Berkeley Laboratory, the third lab that has dominated the field of superheavy elements. RIKEN researchers are the new guys on the block and element 113, if confirmed, would be their first official discovery.

Physicists make superheavy elements by taking a target film of a heavy metal and bombarding it with a beam of lighter nuclei. Very rarely, one of the projectiles hits a nucleus head-on and forms a compound nucleus which flies out of the foil from the force of the collision. The nucleus will spit out a few neutrons to shed excess energy before arriving at the detector, a heavily instrumented block of silicon. Once it is there, researchers can detect the timing of any decays and the energy of the decay products.

If the nucleus just splits apart, or "fissions," it tells researchers little. They learn more if instead it emits an alpha particle (two protons and two neutrons) to produce a "daughter nucleus" and then that emits another alpha and so on. The timing and energies of the alpha decays reveals the identities of all the members of the chain back to the original nucleus. And if one member of the chain is a nucleus that has been previously studied, then its decay properties anchor the whole sequence in reality.

That anchor decay has been missing in the search for element 113. In 2003, the Dubna team claimed to have made one atom of it by bombarding americium with calcium to produce an atom of element 115, which then quickly decayed to 113 and then lighter elements. The team later found three more similar chains. RIKEN researchers use a slightly different technique in which they slam zinc into bismuth, detecting one atom of element 113 in 2004 and another in 2005. But none of the decay chains detected included an anchor decay. So last year, the International Union of Pure and Applied Chemistry (IUPAC) and the International Union of Pure and Applied Physics (IUPAP), the keepers of the periodic table, decided that neither team could claim discovery.

Kosuke Morita, leader of the RIKEN team, says that his team's new result—a single decay—overcomes these shortcomings. The team's first two decays emitted alphas four times to produce a nucleus of dubnium with an atomic weight of 262 which then split apart by fission. But dubnium-262 is known to have an alternative decay path involving more alpha decays. And Morita's team's third atom took that path, decaying to previously-studied lawrencium-258 followed by mendelevium-254 and then fissioning, as the researchers report this week in the Journal of the Physical Society of Japan. "Morita and team have a very good claim. It's a very good landing point in known isotopes," says Heino Nitsche of Lawrence Berkeley National Laboratory in California.

Game, set, and match? Not quite. The Dubna researchers have also accumulated additional evidence to support their claim, which they submitted to IUPAC and IUPAP earlier this year. Dubna researchers have now made a total of 56 atoms of element 113 with five different masses, says team leader Yuri Oganessian. Because the Dubna team used a different target and projectile than the Japanese, all of their decay chains end in the fission of dubnium. However, the chemistry of dubnium had been studied previously, so the team was able to identify that final single atom in the decay chain by chemical means before it fell apart. "You have to commend them," Nitsche says. "But the results are not unambiguous. There are a few experts who are not completely convinced."

Oganessian declines to say who he thinks IUPAC and IUPAP should credit with the discovery. "It would be unethical and incorrect to discuss the issues that are directly connected with the work of experts before they make their decision," he says. He does note, however, that elements 114 and 116 have been credited without the demonstration of an anchor decay. Ultimately, the decision may be a matter of scientific taste, says GSI's Düllmann: "In the end it boils down to which [type of evidence] does IUPAC like best?"

New elements for the Periodic Table