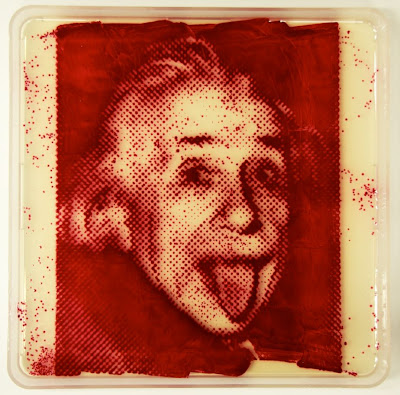 Photographer and microbiologist Zachary Copfer takes issue with people who say the sciences deflate artistic imagination. As someone who works in both fields, the conflict just never made sense to him.

“As I studied science all I could think about was how mysterious and poetic it was,” he says.

With all its variables, abstract thinking and unknowns, says Copfer, science is about as artistic as it gets. To prove it, he recently designed what he calls bacteriogoraphy: growing photographs on bacteria.

Copfer starts by covering a petri dish with different species of bacteria, including Serratia marcescens and E. coli. Then he holds a custom-made negative — he won’t say exactly what it is — over the dish and exposes them to ultraviolet light. The bacteria exposed to the light die; those in the shadow continue growing.

The bacterial images take about two days to grow, or develop. Then, as with a normal photograph, Copfer “fixes” the image, in this case by zapping the remaining bacteria with radiation. To prevent the dead bacteria from drying up and flaking away he covers the final print with a layer of resin and acrylic.

He came up with the process while working on his masters of fine arts at the University of Cincinnati. For his photographs he chose to create, or grow, portraits of scientists and artists he respects. There’s Einstein, Picasso, da Vinci and Darwin. Instead of labeling Einstein a scientist, however, his captions refer to Einstein as an artist. Picasso is referred to as a scientist.

“For me, the theories Einstein came up with are artistic,” he says. “Just like the best art he found abstract ways to think about concrete things.”

Copfer is particularly interested in how Einstein’s theory of relativity disrupted our understanding of time and space. It’s the same kind of exploration and disruptive thinking he sees in Picasso’s cubist work.

“Both were thinking about different ways to theorize three-dimensional space,” he says.

Following this mash-up, Copfer created a series of bacteria photos based on images from the Hubble telescope. They’re grown using a genetically modified strain of E.coli that glow under a black light.

The bacteriogoraphy project is partly a response to the poem “Sonnet — to Science” by Edgar Allan Poe, who Copfer says lamented the way science took the mysticism out of the stars and the rest of the natural world by trying to explain everything in absolute terms:


Science! true daughter of Old Time thou art!
Who alterest all things with thy peering eyes.
Why preyest thou thus upon the poet’s heart,
Vulture, whose wings are dull realities?

For Copfer, our scientific understanding of the starts only serves to enhance the poetry of the galaxies. Especially, he says, if you think about them through the lens of the Big Bang theory, which argues that everything we know actually came from the molecules of a star.

“When you think about the fact that we’re all created by the stars they sort of become like gods that created us,” he says. “And that certainly doesn’t take the poetry away for me.”
Copfer is already working on a new form of bacteriogoraphy he calls bacteria transfers. Just like the clay molds used to create actor’s masks, he’s made a mold that creates an imprint of your face by capturing all the bacteria on your skin. He then transfers that bacteria to a petri dish and lets the bacteria grow your portrait.

“This whole thing is just in its infancy,” Copfer says. “There is still a lot of potential and bacteria is a uniquely powerful medium to keep experimenting with it.”
Posted by Mercury at 12:13 PM