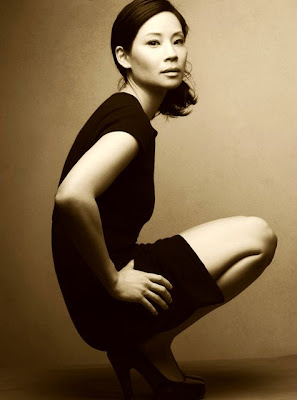 I don't think this is a good idea...not for the Asian female aspect, but for the generalized female notion. There is way too much license being taken here with the Holmes' concept. Roll over in your grave Doyle. This is just going to cause numerous issues of the domestic variety: Bathroom rites, romance, marriage, children...oh my, a little Sherlock or two. Is there any logic in that? Plus, being updated and set in New York, there must be guns, explosions, tons of CGI. And of course, Watson will have to be semi-nude in a few episodes to offer titillation and fray the boundaries of television censorship.

The truth is, I was all set on Sherlocks. Spoiled, really. I had the slick fights and brisk dialog of the Guy Ritchie films and the cunning, rarefied world of the BBC’s Sherlock series. Other Holmeses need not apply, would have been my attitude if you’d asked me.

But then CBS announced that it had cast Lucy Liu as Watson in the new Holmes show Elementary. I was … conflicted. Not to get all specific, but as an Asian female, I feel guilty about harboring any intolerance toward an Asian female actor—especially this talented, extra-famous one, the Lucy Liu of Lucy Lius. But then there was the fact that Watson would not only be female but that the series would be set in modern-day New York. Purists could be forgiven for asking, as Steven Moffat, showrunner of the equally contemporary BBC show, did, whether Elementary’s protagonist would be Sherlock Holmes “in any sense other than he’s called Sherlock Holmes.”

Then again, it’s also a little insane for any one creator to dictate what counts as canon. Arthur Conan Doyle‘s most famous character has been mucked with for more than 100 years. Isn’t Sherlock one of the earliest sources for fanfic? Without painting myself into a corner by arguing what does and does not qualify as a Sherlock Holmes story (House, M.D.? That cartoon mouse movie?), the one thing that has to ring true no matter the setting is Holmes’ relationship with Watson, the most beautiful romance in history. “They’re soul mates,” says Jules Coomber, cofounder of the exhaustive (and spoiler-customizable) fan site Sherlockology. “Even when you know whodunit, it’s the friendship between Watson and Holmes that makes you reread.”
It wasn’t the female Watson that most worried me—though I did wonder whether that might introduce a confusing sexual dynamic. (Depending on which version you subscribe to, that relationship already has a confusing sexual dynamic.) When I put the “will they or won’t they” question to Rob Doherty, Elementary’s writer and executive producer, he responded with a satisfyingly straightforward “They won’t.” Thank God. But I’d understand the impulse to go the other way. Watson ushered in the era of the sidekick as reader proxy; i.e., he’s us. So if you have a crush on Holmes—easy enough to imagine with Jonny Lee Miller in the role—you want Watson to act on it.

No, what really made me nervous about the casting of Liu was my own baggage. An Asian female Watson will make the whole story seem simultaneously closer and farther away. I’d almost rather she be a Holmes groupie if the alternative is some stereotyped striver or a Watson who knows Jeet Kune Do. Terrifyingly, the phrase “Tiger Watson” has been floating behind my eyes.

But I don’t think it will be a problem. Doherty’s résumé is full of gutsy genre women in charge—he worked on Star Trek: Voyager, Dark Angel, Ringer, Tru Calling, and Medium. Besides, one Dr. Joan Watson won’t dilute the Holmes brand. “Sherlock can take it,” Doherty says. “And a female Watson won’t change the spirit of the character. It’s got to be a show about them figuring out intricate mysteries but also arguing about whose turn it is to pick up groceries.”

As with the devotees of any cult property, we Sherlockians can never be completely happy. No Watson ever lives up to the one in our heads. Yet sometimes, somehow, retelling Holmes actually works out. Elementary has a fantastic time slot: Thursdays at 10 pm. And if the ratings for Sherlock are any indication, most Americans haven’t encountered a modernized Holmes. So, despite my loyalty to those previous Holmeses, I want to give Jonny Lee Miller a chance. He was brilliant in Hackers.
Posted by Mercury at 10:08 AM