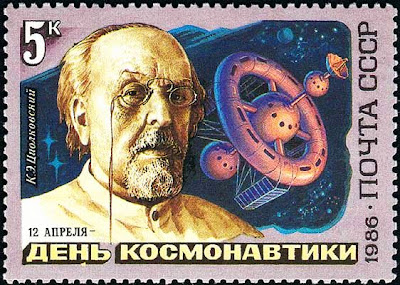 155 years ago, on September 17, Konstantin Tsiolkovsky, one of the founding fathers of rocketry and astronautics, was born in the Russian province. One of his famous sayings goes: "Earth is the cradle of humanity, but one cannot live in a cradle forever". Long before the beginning of the space era this Great Russian scientist derived a formula for space rockets' overcoming the earth's gravity.

Tsiolkovsky dreamt about space since he was a child, the head of a department at the Tsiolkovsky Museum of Astronautics History Tatyana Zhelnina says.

"He thought that he was born with this dream. For a very long time Tsiolkovsky did not know how the earth gravity could be overcome. When he was 15 he learnt from the Malinin physics textbook (one of the best physics textbooks of that time) that to do this it was necessary to build up speed at least 28,000 km per hour. But what a flying vehicle should look like to develop such a speed, he did not know."

Once when he was 17, it seemed to him that he had invented this vehicle. He walked all night long down the streets of Moscow where he lived then but finally he came to the conclusion that he was wrong in his calculations. The next 20 years of his life Tsiolkovsky devoted to definition of the qualities of the space environment, Zhelnina continues.

"If it had been determined that space denied human organism there would have been no need to look for technical solutions to overcome earth gravity. He wrote several significant works, in which he laid the foundation for the discipline, which is now known as the "physics of zero gravity".

He came to understand that space environment would not kill a human being. He was confident that man would manage to accommodate in space and to neutralize the dangerous effects of zero gravity."

The world's first spaceman Yury Gagarin said that during his flight he had been able to see how precise Tsiolkovsky's conclusions on all the factors of space flight were. In 1903, he published his most important work "The Exploration of Cosmic Space by Means of Reaction Devices".

In this workTsiolkovsky presented the Tsiolkovsky formula which was simple: in order to build up space speed the fuel mass must be four times as heavy as the weight of the rocket. For the implementation of this idea he came up with the idea of a multistage spacecraft.

Today Earthlings have their own home on the orbit which is the International Space Station (ISS). This construction weights 200 tons and can freely soar in empty space.

The idea of the space station also belongs to Tsiolkovsky who was also confident that the human race would be able to explore the Moon and Mars. According to the scientist, in order to survive humans must have in store a space at least within the boundaries of the solar system.

Remembered for: One of the fathers of rocketry and cosmonautics, along with Goddard and Oberth

Quotation: "Earth is the cradle of humanity, but one cannot remain in the cradle forever."

Konstantin Eduardovich Tsiolkovsky was born Sept. 17, 1857, in Izhevskoye, Russia. He was the son of a Polish deportee to Siberia. At age ten he nearly became deaf from scarlet fever and had to quit school. He refused to be handicapped by his deafness and continued his education on his own at home. His family recognized his thirst for knowledge and sent him to Moscow to attend college. He was accomplished in both science and mathematics and became a teacher at Kaluga, Russia. Even as a teacher, Tsiolkovsky found time to learn. He read Jules Verne's stories of space travel and began to write science fiction stories himself. He introduced elements of science and technology into his stories, such as the problem of controlling a rocket as it moved between gravitational fields. Gradually Tsiolkovsky moved from writing science fiction to writing theoretical papers on topics such as gyroscopes, escape velocities, the principle of action and reaction, and the use of liquid propellant rockets.

In 1894 Tsiolkovsky designed a monoplane that was not flown until 1915. He built the first Russian wind tunnel in 1897. He also was an insightful visionary who thought a great deal about the uses of his beloved rockets to explore and master space. He was the author of Investigations of Outer Space by Rocket Devices (1911) and Aims of Astronauts (1914). Although rockets had been in use since their invention in twelfth-century China as weapons that evolved from fireworks, it was Tsiolkovsky who used mathematics and physics to study and model the manner in which they operated, called rocket dynamics. In 1903 he published the rocket equation in a Russian aviation magazine. Called the Tsiolkovsky formula, it established the relationships among rocket speed, the speed of the gas at exit, and the mass of the rocket and its propellant. This equation is the basis of much of the spacecraft engineering done today. In 1929 he published his theory of multistage rockets, based on his knowledge of propulsion dynamics.

Tsiolkovsky is remembered for believing in the dominance of humanity throughout space, also known as anthropocosmism. He had grand ideas about space industrialization and the exploitation of its resources. Tsiolkovsky has been honored since his death in 1935. A far side moon crater is named in his honor. In 1989 he was invested in the International Aerospace Hall of Fame. The Konstantin E. Tsiolkovsky State Museum of the History of Cosmonautics in Kaluga, Russia, keeps the importance of his theoretical work before the public. In Russia, Konstantin Tsiolkovsky is called "the father of theoretical and applied cosmonautics." Although the Romanian Oberth and the American Goddard conducted similar research and arrived at comparable conclusions, there is no evidence that each knew details of the other's work. Therefore, all three of these scientists share the title of Father of Rocketry.