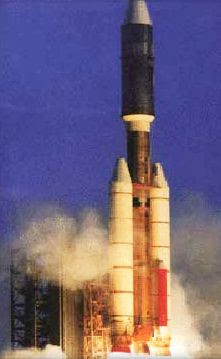 How long does it take to fly to the edge of the solar system? At least 35 years.  Voyager 1 is there now, carrying 1970s-era technology that might make your jaw sag -- computers with 8,000 words of memory and eight-track-tape recorders.

Those of us who can remember popping the Allman Brothers into the eight-track tape deck can identify with Voyagers 1 and 2 -- a couple of nearly old fogies. But these NASA stalwarts are set to make space history.  Again.

"They were the first fully automated spacecraft that could fly themselves," Ed Stone, chief Voyager project scientist, told the Los Angeles Times in an interview Tuesday. "They were the peak of technology."

Now the Voyagers are on their way to becoming the first human-made objects ever to enter interstellar space -- that yawning black gap between the stars.

According to NASA, both spacecraft have spent the last five years  exploring the outer layer of the heliosphere, "the giant bubble of charged particles the sun blows around itself."

"When Voyager was launched, the space agency itself was only 20 years old," noted Stone, who also is a longtime Caltech physics professor. "We always hoped we would reach interstellar space."

Scientists didn't just hope for it. They planned for it.  The spacecraft's CRS -- Cosmic Ray Subsystem -- was intended specifically for use in interstellar space, Stone said.

"It was able to measure many things" along the journey, Stone said, "but its prime purpose was determining the interstellar spectrum of cosmic rays."
Stone has been with NASA's Voyager project since the beginning, and he's excited.

"This is a major milestone," he said. "This will be the first spacecraft to enter interstellar space.  We'll know exactly how big this bubble is."

There are estimates on the size of the bubble, which is described in one Associated Press report as a hot and turbulent area created by a stream of charged particles from the sun.  Interstellar space begins somewhere from 11 billion to 14 billion miles from the sun.

So any day now, Voyager 1 could exit the bubble and cross over into interstellar space.  Any day -- week, month or, perhaps, year.

"Voyager travels a million miles a day," Stone said, "but a million miles out of a billion miles is a very tiny little sliver."
Once the spacecraft does cross over, it can measure the strength and direction of the magnetic field that's pressing against the outside of the  plasma bubble, Stone said. And the intrepid newbie can take "quality measurements" of cosmic rays, including the ionized rays that are unable to enter our solar system.

"For the first time," the scientist said, "we'll be able to measure the intensity of these cosmic rays that can't get in."
The Voyagers' original goal, as the AP wrote, was to tour Jupiter and Saturn.  They sent back data on Jupiter's big red spot and Saturn's rings. They discovered erupting volcanoes on the Jupiter moon Io; saw hints of an ocean below the icy surface of Europa, another Jupiter moon; and found signs of methane rain on the Saturn moonTitan.

Voyager 2 journeyed to Uranus and Neptune. It's the only spacecraft to fly by these two outer planets.

How much longer can the two Voyagers last?

They have enough electrical power to last until 2020, Stone said. The team behind the spacecraft will begin to turn off instruments at that point to reduce power needs. The last instrument will likely be shut off in 2025.

"Then, they will orbit the center of our galaxy essentially forever," he said.

The total cost of the Voyager mission from May 1972 through the Neptune encounter (including launch vehicles, radioactive power source (RTGs), and DSN tracking support) is 865 million dollars. At first, this may sound very expensive, but the fantastic returns are a bargain when we place the costs in the proper perspective. It is important to realize that:

1. on a per-capita basis, this is only 8 cents per U.S. resident per year, or roughly half the cost of one candy bar each year since project inception.

2. the entire cost of Voyager is a fraction of the daily interest on the U.S. national debt.

Enter "Voyager 1" in the blog's search engine for more articles.