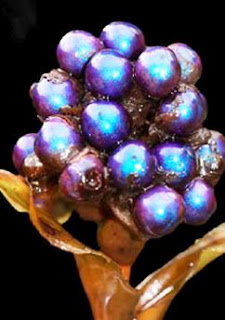 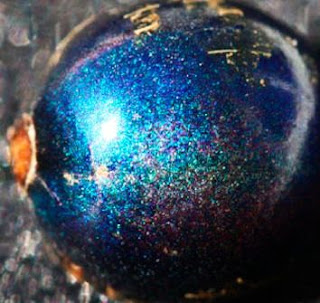 Most colours around us are the result of pigments. However, a few examples in nature – including the peacock, the scarab beetle and now the Pollia condensata fruit – use structural colour as well. Fruits are made of cells, each of which is surrounded by a cell wall containing cellulose. However, the researchers found that in the Pollia condensata fruit the cellulose is laid down in layers, forming a chiral (asymmetrical) structure that is able to interact with light and provide selective reflection of only a specific colour. As a result of this unique structure, it reflects predominately blue light.

The scientists also discovered that each individual cell generates colour independently, producing a pixelated or pointillist effect (like those in the paintings of Seurat). This colour is produced by the reflection of light of particular wavelengths from layers of cellulose in the cell wall. The thickness of the layers determines which wavelength of light is reflected. As a result, some cells have thinner layers and reflect blue; others have thicker layers and reflect green or red. The researchers believe that the plants invest in the complicated colouring structure as a mechanism for seed dispersal. Although the Pollia fruit does not provide any nutritional value, birds are attracted to its bright colouring – possibly as a means of decorating their nests or impressing their mates. Dr Beverley Glover from the University of Cambridge's Department of Plant Sciences, who jointly led the research, said: "This obscure little plant has hit on a fantastic way of making an irresistible shiny, sparkly, multi-coloured, iridescent signal to every bird in the vicinity, without wasting any of its precious photosynthetic reserves on bird food. Evolution is very smart!"

Because of how it is created, the colour of the Pollia condensata fruit does not fade. The researchers found that samples of the fruit in herbarium collections dating back to the 19th century were as colourful and shiny as ones grown today. Dr Silvia Vignolini, lead author on the paper from the University of Cambridge's Department of Physics, said: "By taking inspiration from nature, it is possible to obtain smart multifunctional materials using sustainable routes with abundant and cheap materials like cellulose. "We believe that using cellulose to create coloured materials can lead to many industrial applications. As an example, edible cellulose-based nanostructures with structural colour can be used as substitutes for toxic dyes and colorants in food. Moreover, the fact that the processes involved in cellulose extraction and manipulation are already used in the paper industry facilitates the use of such materials for industrial applications such as security labelling or cosmetics."