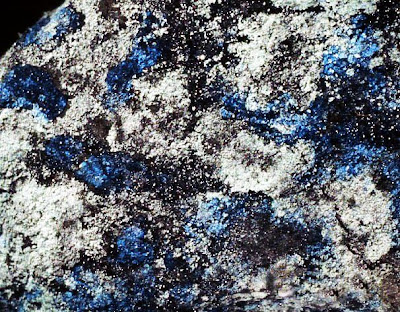 Workers near Minas Ragra. Ore mined in Peru was sent 3,800 miles to a U.S. smelting plant via llama, train, and ship.

"The Rocks at the Top of the World"

For almost 100 years after its first discovery in 1801 the element vanadium languished in obscurity. It was rare and lacked any apparent use. All that changed at the turn of the century when John Oliver Arnold discovered that adding a tiny amount of the element to steel made the steel alloy stronger. Soon after, Henry Ford picked up a fragment of a wrecked French race car. Surprised by its light weight, he sent the piece off for analysis only to be further surprised to learn the steel contained vanadium. Vanadium steel, Ford learned, also turned out to be rustproof and shock and vibration resistant—the perfect material for a new industry in search of new materials. The first Model-T car built by Ford contained vanadium steel in its crankshafts, axles, gears, and springs. Initially, vanadium’s life in industry appeared likely to be cut short: there was no single significant source of the element, little mining of it, and no other options for those looking to make stronger steel on a large scale. But one day in 1905, in one of the world’s most remote and harshest regions, two men discovered the vanadium equivalent of a gold mine.

That day, Antenor Rizo Patrón Lequérica and Eulogio E. Fernandini de la Quintana rode their horses to Minas Ragra, a windswept, barren area on the edge of the Andes about 100 miles (161 kilometers) north of the capital, Lima, and more than 25 miles (40 kilometers) from the nearest railway. The high altitude, 3 miles (5 kilometers) above sea level, turned even a short amble into an exhausting proposition. But the two had made the grueling journey for a reason. Fernandini owned a nearby lead, silver, and copper mine, as well as a smelter to refine the ores. Rizo Patrón managed the smelter laboratory. In search of fuel to power the smelter, they collected samples of any rock that looked burnable. After filling their packs they got on their horses for the return journey.

As night approached and temperatures dropped below freezing, the two men lodged at Hacienda Hayarragra, about 12 miles (19 kilometers) from Minas Ragra. To warm their icy room they burned one of the samples—a shiny lump of what looked like coal. Though the samples did not appear to contain pyrite or any other familiar sulfide minerals, the burning lump produced a surprisingly large amount of poisonous sulfurous gas. Rizo Patrón analyzed the sample on his return to the lab and discovered a new mineral, one that contained vanadium. While Rizo Patrón got naming rights—he called it patronite (VS4), after himself—Fernandini applied for mining property rights.

Meanwhile, in the United States a man named Joseph M. Flannery had a problem. Flannery managed the Flannery Bolt Company at Bridgeville, Pennsylvania, which produced flexible stay bolts used primarily for steam-locomotive boilers. Flannery wanted high-strength steel alloys for his bolts. He had heard about vanadium findings in Peru and in 1906 dispatched two American geologists, Donnel F. Hewett and Alfred Thompson, to search for a supply. The two men first visited the Llacsacocha mine, where vanadium had also been discovered, but found nothing worth mining. Disappointed, they returned to Lima, where they planned to board a ship for home. Before departing they met with José Julián Bravo, who managed the laboratory for the Corps of Mining Engineers of Peru and who had written a report on patronite. Bravo showed a sample from Minas Ragra to the two Americans, who promptly turned around and headed inland again. Their subsequent report to Flannery convinced him to buy Minas Ragra.

Fernandini had no objection to selling: he knew he lacked the resources to develop the mine. He sold it to Flannery for 2,000 Peruvian pounds (approximately U.S. $10,000) and 10% of the stock in the new company, the American Sales Company. Flannery then established the American Vanadium Company, and the mine opened for business the very next year.

Equipment had to be lugged to the remote site, local miners hired, and lodging built for them. Only 201 metric tons of vanadium ore were mined in 1907, for a total of 28.2 metric tons of vanadium pentoxide (V2O5). Between the mining in Peru and the smelting in Pennsylvania, the ore traveled almost 3,800 miles (6,120 kilometers), first on the backs of llamas and then via rail and ship. Production quickly ramped up; by 1910 output had increased to 3,130 metric tons containing 702.4 metric tons of V2O5. The extremely high-grade ore contained up to 40% V2O5, consisting of patronite and its various oxide minerals.

The vanadium from Minas Ragra changed the world’s steel industry. Before Flannery’s purchase of the mine vanadium steel-alloy production in the United States was less than 1,000 tons per year; after the Minas Ragra mine and the Bridgeville smelter began operating, production increased to 800,000 metric tons in 1916, reaching an annual rate of 1,100,000 metric tons in 1919. Vanadium steel became a player in some of the major advances of the era: it appeared in parts of the Panama Canal lock gates and in the first plane-mounted cannon in World War I, as well as in Ford’s Model T.

The approximately 36,000 metric tons of V2O5 the Minas Ragra mine produced between 1907 and 1955 came from only a small area 360 feet (110 meters) in length, 32 feet (10 meters) wide, and 200 feet (60 meters) deep, inside of an open pit measuring only 850 feet (260 meters) by 400 feet (120 meters). This one small body of ore in Peru allowed its American owners to satisfy more than half the entire world’s demand for vanadium and to control the world vanadium market for over 50 years. For much of that time the ore was dug by hand, dumped into ore carts, and then pushed out of the mine by workers. Only in 1943 did a diesel locomotive replace hard labor in moving ore carts.

In 1909 Flannery learned that his sister had cancer. He withdrew from his vanadium interests and in 1911 established the Standard Chemical Company in Pittsburgh to concentrate on producing radium for cancer treatment. His former company carried on without him, though the mine twice became a victim of its own success. The rapid increase in vanadium production caused the price to collapse to the point where mine operations were shut down between 1912 and 1913 and again in 1922. Before ore was first dug out of Minas Ragra, vanadium had sold for $4,000 per pound. Soon after the mine closed for the first time, vanadium was selling for only $1.80 per pound.

In 1919 the mine was sold again, to Jacob L. Replogle and Charles M. Schwab, who had established the Vanadium Corporation of America. The two wanted to secure sources of specialty steel and went on to buy other vanadium, molybdenum, and tungsten mines and smelters in Colorado, where vanadium was produced as a by-product of uranium mining. A year later the new owners decided to install rail at Minas Ragra. A 4-mile- long (6 kilometer) railway was built between the mine and the Jumasha beneficiation plant (where the ore underwent initial separation) located on the west shore of Lake Punrún. An additional 16 miles (26 kilometers) of rail were laid from the east side of the lake to Ricrán railway station. In 1924 the railway opened, and the llamas were retired from their ore-carrying duties.

But by 1929 the high-grade vanadium ore was nearly exhausted, and attempts to treat low-grade ore proved unsuccessful. The mine closed in 1930, only to reopen in 1934 when a new process to treat low-grade ore was introduced. The ore was calcined with salt and the vanadium leached out with sulfuric acid. Production of V2O5 reached 2,073 metric tons in 1940 and continued until 1955, by which time the mine’s mineral reserves were almost exhausted. The mine closed, its workings were dismantled, and in 1959 the mineral claims were abandoned.

Today, the main sources of vanadium come from deposits of titaniferous magnetite in South Africa, China, and Russia, and uranium-bearing sandstone and phosphate rock in the United States. Most of these contain less than 2% V2O5, only a twentieth of the amount contained in Minas Ragra ore at its peak. Other vanadium sources include heavy petroleum, oil sand, and coal. The total world production is approximately 100,000 metric tons of V2O5 per year.

The open-pit mine at Minas Ragra is now filled with water, but the railway grades and the foundations of the beneficiation plant at Jumasha still remain visible. High in the Andes, they serve as monuments to the first commercial vanadium production in the world.

Atsushi Gomi is the chief representative of the Peruvian branch of Mitsui Mining & Smelting Company, Ltd., and the president of its subsidiary company, Compañia Minera Santa Luisa S.A.

[Robert Whetham is a retired land-use planner and author of several books on railway subjects, including two recent publications on the history of railway development in Peru.]

Visit the Chemical Heritage Foundation for a lot of cool stuff.