Danielle Driggers on the value of a library 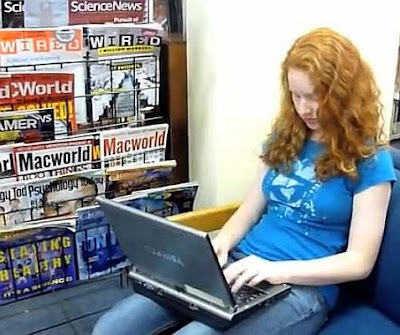 I am a few months behind on this, but it is relevant. Libraries are cool places. Unfortunately, many are changing and have adopted some strange practices. Many libraries many fall victim to e-books. Isn't it better to hold a book in your hands? Some libraries are eliminating the magazine department and relying on computer sources. Sure, several can read the same journal online, but these are stripped journals. They often lack advertising that is found in the print edition especially in the scientific magazines that can be interesting to read. I know of one library system that gives the local librarian the power to remove books from the shelf and place them on the 25 cent table.

Nevertheless, here is Danielle Driggers' perspective on libraries and the second place winner.

A music video partly filmed in Dakar, Senegal by teenager Danielle Driggers and another starring a bunch of teens rapping and chillin' in their high school library are winners of the "Why I Need My Library" contest, which comes with $3,000 in prize money from the American Library Association to a school or local public library of the winners' choice.

The two winning videos were chosen from a total of 157 entries that competed for the top prizes. Driggers sings about people moving around to different countries and not having much consistency in their lives, but can always find solace in the library.


I move around to different countries.
Don't have much consistency.
Different place
Different friends
Different language every time we move again
So I turn to the library.

The importance of libraries in her life is what won her the grand prize in the category for 13- to 15-year-olds. Driggers chose the library at her elementary school, Timber Creek Elementary School in Flower Mound, TX, as the beneficiary of the $3,000 prize money. Driggers, and her sister Aleah, who coproduced the video, will receive $50 Amazon gift certificates.

A team eight of southern Connecticut teens took grand prize in the 16- to 18-year-old category for their original music video and lyrics showing teens "chillin' in the high school library." The $3,000 prize money will go to the library at Connecticut's New Canaan High School. The team was made up of students Katayoun Amir-Aslami, Ashley Feldman, Isabelle Herde, Nick Howard, Nicola Scandiffio, Stewart Taylor, Courtney Wills, and Nick Zanca.

"The teens who put together the winning videos demonstrated unique creativity in how they conveyed why they need their library," says ALA President Roberta Stevens, who launched the contest as a way to engage teens in library advocacy. "I'm happy funds will go to support their libraries because of their efforts, and I hope that they maintain a close relationship with libraries into the future."

The Why I Need My Library contest asked teens ages 13 to 18 to create original videos on why they think libraries are needed now more than ever. Between January and April, more than 600 teens worked on videos alone or in groups and submitted them to the contest through YouTube. Teens used a variety of techniques in their videos, including live action, stop motion, and machinima.

Runners up were also named. Two first runners up were selected in each age group and will receive $2,000 for their libraries.
Posted by Mercury at 4:22 PM