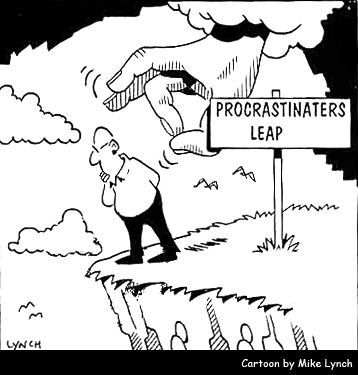 "Philosopher Muses on “The Art of Procrastination”"

Procrastinators have a reputation as loafers, laggards and lollygaggers. A bit harsh, believes University of California, Riverside philosopher John Perry, a self-described procrastinator who asserts that, unlike their reputation, most people who excel at postponing the inevitable actually lead productive lives by busying themselves with many tasks to avoid others deemed more onerous.

Perry calls it structured procrastination, a strategy of completing less-important tasks to avoid those higher on an individual’s priority list. He has written an entertaining, philosophical self-help book for procrastinators, “The Art of Procrastination, A Guide to Effective Dawdling, Lollygagging and Postponing,” which was published in August by Workman Publishing.

Structured procrastination can convert procrastinators into “effective human beings, respected and admired for all that they can accomplish and the good use they make of their time,” he says.

“You can be a procrastinator and still get a lot of work done,” says Perry, whose 1995 essay articulating a theory of structured procrastination continues to be a top hit on Google searches.

Retired from Stanford University, Perry is a leading scholar of personal identity, philosophy of language and philosophy of mind. Since the original essay — “How to Procrastinate and Still Get Things Done”— was published in the Chronicle of Education he also has become known as an expert on structured procrastination, a distinction that has gained him a new audience among procrastinators and those who live with them. In September 2011 the essay won the Ig Nobel Prize for Literature, an award presented by the magazine Annals of Improbable Research to honor achievements “that first make people laugh, and then make them think.”

All of the attention comes as something of a surprise to the scholar whose work is known to philosophers worldwide and to fans of the long-running “Philosophy Talk” program that airs weekly on 100 radio stations in 30 states, Denmark and Australia (philosophytalk.org). The show, which Perry co-hosts, covers topics ranging from baseball to the meaning of death, the nature of numbers, and what movies are most interesting philosophically.

Since Perry posted the original essay on the Internet he has received a lot of e-mail from people who said he had helped them. “I think there are a lot of procrastinators out there who are a lot like me,” the philosopher says. “They’re not lazy, and they’re not psychotic. They have an approach to things that is not optimal. They are probably decent people who are getting a lot of things done.”

Procrastinating does not mean doing nothing, he explains. Nor is it the worst flaw a person can have.

“Most procrastinators are nice folks who get a lot done, albeit by not doing other things they should be doing,” Perry says. “You may be a procrastinator, but you aren’t a serial killer or a child-molester or someone who steals food from hungry nuns.  Pat yourself on the back for what you do get done, and give yourself a break.”

Here are suggestions from Perry on becoming a successful structured procrastinator:

Leave things until the last minute as a way of budgeting your time. Most procrastinators are (sort of) perfectionists.  As long as they have a lot of time to do a task, they fantasize about doing a perfect job.  Leaving it till the last minute is a way of giving oneself permission to do a merely adequate job. Ninety-nine percent of the time a merely adequate job is all that is needed.

Lots of tasks disappear if given a chance. You should make sure a task is really necessary before committing yourself to doing it.  Maybe the boss who asked for it will get fired, or take another job, or get promoted, or forget, or die.  Maybe some gung-ho colleague will do it for you.  Maybe life on earth will end.  If it’s still there tomorrow, or the next day, there will be time to do it then.

Non-procrastinators are inevitably ignorant. Suppose you really never put off until tomorrow what you could do today.  You’d have to work right up to midnight every night.  So you would never be able to watch Jon Stewart or Stephen Colbert or David Letterman.  So you wouldn’t know anything about current events and their deeper meanings.  That would be irresponsible.

Procrastination encourages productive subconscious thought. When we put off doing something, our subconscious focuses on it, so then when we get around to doing it we are full of good ideas we wouldn’t have had if we had plunged right in.  Any procrastinator will tell you that.  So it must be true.

When it comes to email, procrastination is a powerful survival technique. If you answer email  promptly, some people will respond with another before you have a chance to pat yourself on the back.  If you are careful to procrastinate for at least a day before answering any email, you will encourage such people to drop you from their list of correspondents. 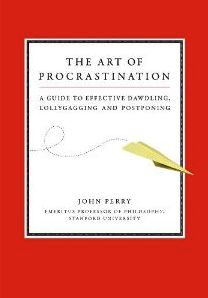 The Art of Procrastination: A Guide to Effective Dawdling, Lollygagging, and Postponing, or, Getting Things Done by Putting Them Off

Email ThisBlogThis!Share to TwitterShare to FacebookShare to Pinterest
Labels: procrastination