Timberrrrrrrrrr...make way for the shuttle Endeavour 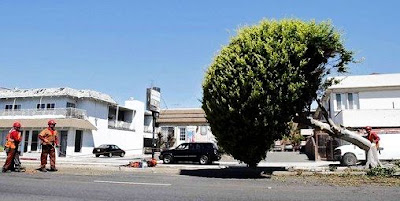 A landscaping crew cuts down a tree on Manchester Boulevard to clear the way for the space shuttle Endeavour when it makes its journey from Los Angeles International to its new home in Exposition Park.

For some South L.A. residents, the excitement of Endeavour rumbling through their neighborhoods en route to the California Science Center faded when they learned that 400 trees had to be cut down.

Space shuttle Endeavour's final 12-mile journey through the streets of South Los Angeles already promises to be a meticulously planned spectacle: a two-day parade, an overnight slumber party in Inglewood and enough hoopla to create a giant traffic mess.

But for some residents in South L.A., the excitement of the shuttle rumbling through their neighborhoods quickly faded when they learned that 400 trees will be chopped down to make room for the behemoth.

The California Science Center — Endeavour's final home — has agreed to replant twice as many trees along the route from the shuttle's docking place at Los Angeles International Airport to Exposition Park.

But that's not enough to satisfy some tree lovers.

"They are cutting down these really big, majestic trees," said Lark Galloway-Gilliam, a longtime Leimert Park resident and neighborhood council director. "It will be beyond my lifetime before they will be tall like this again."

Many worry that the replacements — young, wiry trees that will provide little shade — will pale in comparison to the mature magnolias that line the Crenshaw corridor. Others are concerned that the bare streets will further depreciate property values.

City officials and the science center are hoping the historical significance of housing the shuttle will offset the tree loss.

In its 25 missions spanning nearly two decades, Endeavour circled the Earth more than 4,600 times, spending 299 days in space. One of those missions was to repair NASA's Hubble Space Telescope, basically giving it contact lenses so that it could peer farther into the universe.

"It is a historical artifact and national treasure," said California Science Center president Jeffrey Rudolph. "The community understands that and recognizes that it will help inspire the next generation of explorers."

Several alternatives for the Oct. 12 move were considered but ultimately discarded.

Taking the massive shuttle apart would have damaged the delicate tiles that acted as heat sensors. Airlifting the 170,000-pound craft was also ruled out. Not even heavy-duty helicopters could sustain that kind of weight, Rudolph said.

A freeway route was considered until engineers realized that the five-story-tall, 78-foot-wide shuttle could not travel under overpasses.

"We had to identify a route that had no permanent infrastructures like buildings and bridges," Rudolph said.

They settled on a final route that will follow Manchester Boulevard to Crenshaw Drive, then onto Crenshaw Boulevard and Martin Luther King Jr. Boulevard — wide thoroughfares with few permanent obstacles.

To make way for the shuttle, some trees will be pruned, power lines will be raised and traffic signals will be removed.

Inglewood will lose 128 trees, and communities in South Los Angeles about 265 trees, though the exact number has not yet been determined.

Meanwhile, officials have been working to allay fears by sharing replantation plans, seeking community input at neighborhood council meetings and finding compromises where they can.

Residents disapproved of a route that would have taken the shuttle through Leimert Boulevard and forced the removal of dozens of pine and fir trees planted years ago to honor the Rev. Martin Luther King Jr.

Construction crews in Inglewood are already chopping pine, ficus and other trees down to their stumps.

Inglewood officials see the tree removal as a win-win. The city rids itself of some problematic trees and even gets sidewalks repaired. In total, the California Science Center is expected to spend $500,000 to improve the city's landscape.

"The move of the shuttle allows the city to be a part of this national endeavor," said Sabrina Barnes, Inglewood's director of parks, recreations and library services. "And gives the chance to address problematic trees that have eroded the landscape."

Workers are expected to start replanting trees a few weeks after Endeavour reaches the science center.

Still, Cristina Melendrez said she will miss the sight and smell of the pine trees. But she's also excited about the learning possibilities. She said she's planned a month-long curriculum around Endeavour's arrival as part of her job at AbilityFirst, a nonprofit that serves people with disabilities.

"It's a shame they are cutting down these beautiful trees," she said. "But it's going to be fun having our participants witness history."
Posted by Mercury at 1:30 PM