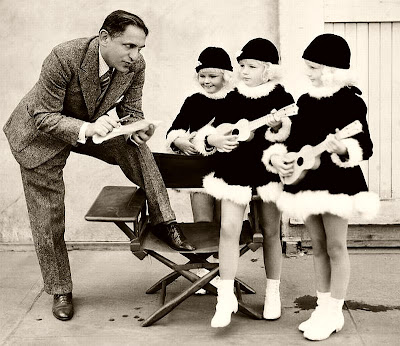 Gus Edwards, the director and songwriter, auditioning the Mawby Triplets. 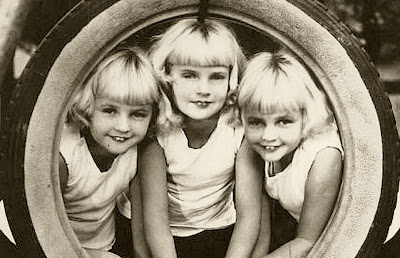 Hollywood publicity agents called them the Mawby Triplets. They were a set of adorably blond little English girls who appeared in some of the earliest talking films, cherubs adorning the celluloid canvases of the 1920s and ’30s. Cast in movies with stars like Douglas Fairbanks Jr., Gloria Swanson and John Barrymore, they were, for a time, among the most famous children in the world.

Their parents shielded them from knowing how famous they were, isolating them from their fans and other children. Their agents shielded the fans from knowing the truth about the girls — that they were not really triplets. They were actually composed of twins, Claudine and Claudette, and their sister, Angella, who was 11 months older.

“Mummy and Daddy were at first rather taken aback,” Claudine Mawby Walker recalled in an interview with The Daily Mail in 1995. “They kept saying that, contrary to appearances, we weren’t actually triplets. But the film people just said we looked like triplets, and that was what counted.”

If anyone asked, she added, “Daddy would just joke that only two of us were triplets.”

Mrs. Walker died on Sept. 13 at her home in Poole, on the south coast of England, where she lived most of her life after leaving Hollywood in the 1930s. She was 90, Reuters said, and the last surviving sister. Her twin, Claudette, died at 19, caught in a German bombing raid over Brighton in 1941. Their sister, Angella Carr, died in 2000.

When the Mawbys arrived in Hollywood, in 1928, the fledgling industry was reaping bonanzas at the box office with its child stars. Jackie Coogan and Hal Roach’s “Our Gang” kids were at their peak. Shirley Temple was in the wings.

The sisters, who appeared in films from roughly the ages of 5 to 10, later in life recalled their sojourn in that world as if it had been a dream. “No one has heard of the Mawby Triplets now,” Mrs. Carr told The Mail in 1995. “Whenever I mention it to my friends, they don’t believe it, so I just keep quiet.”

Yet the girls sang “Singin’ in the Rain” with Jack Benny in “The Hollywood Revue of 1929,” a variety show on film featuring the entire MGM pantheon, including Lionel Barrymore, Buster Keaton, Laurel and Hardy, Norma Shearer and Joan Crawford. They appeared with Swanson in “What a Widow” (1930) and with Bessie Love in “Broadway Melody” (1929), which earned Ms. Love an Academy Award nomination.

William Randolph Hearst and Marion Davies, his mistress, once took them to lunch at the Brown Derby. The girls remembered the crackling excitement in the air as members of the wedding party of Joan Crawford and Douglas Fairbanks Jr. in 1929.

It was all good, more or less — a rare sour note occurring on a visit home to England in 1930, when publicity agents arranged for them to meet George Bernard Shaw at his Hertfordshire home. The girls were not favorably impressed.

“He was a rather deaf old man with a beard, and he kept his wife locked up indoors, doing the chores,” Mrs. Walker said. “She wanted to come out to see us, but he kept pushing her back inside.”

A photo of the meeting appeared in thousands of American and British newspapers. In some, the caption described the great playwright looking from one child to another, asking, “Which is which?”

Claudine Ella Mawby and her twin sister were born on Aug. 10, 1922, in London to Claud and Ella Mawby. Her father was a captain in the British Army, her mother the daughter of a shipping magnate.

How the girls got into the movies was itself a Hollywood tale. The family was visiting Southern California in 1927 on orders from her mother’s doctors, who had recommended the balmy weather to help her recover from a kidney operation. As the Mawbys disembarked from a luxury ocean-liner at a Los Angeles pier — a favorite haunt of the paparazzi in that era — the three pretty, blindingly blond, almost indistinguishable children caught the photographers’ attention. Soon pictures of them began appearing in local newspapers.

The photos, in turn, were spotted by studio talent scouts, who persuaded the parents to sign the girls to a contract. The family rented a house in Malibu, and the sisters appeared the following year in their first film, “The Baby Cyclone,” with Lew Cody.

The adventure ended a few years later, as suddenly and unexpectedly as it had begun. The girls did not know why at the time, but they later learned that the kidnapping and murder of the 20-month-old infant son of Charles and Anne Morrow Lindbergh in 1932 had sparked their parents’ decision to return to England.

Though the girls appeared in London stage plays in their early teens, World War II ended what might have been left of their careers. In 1941, Claudine Mawby married William Walker, a British fighter pilot, who became a brewing company executive. They had seven children, five of whom survive her, as does Mr. Walker, from whom she was legally separated but never divorced.

Mrs. Walker regretted not staying in Hollywood, she told interviewers. But it was not the opportunity for stardom she missed; it was her twin.

“I used to regret bitterly that we came back,” she said in 1995, “because, almost certainly, had we stayed out there, Claudette would still be alive now.”
Posted by Mercury at 6:37 AM