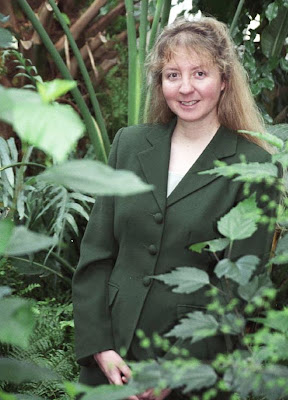 When the high-tech bubble burst in 2001, it came as a natural career crossroads for France Tremblay.

For nearly a decade, the Kanata Lakes woman had worked as a scientist, first studying quantum mechanics at the prestigious Cavendish Laboratory at the University of Cambridge in England, then later developing radar systems for the Department of Defence.

From 1996 to 2001, Tremblay managed teams of scientists developing the next generation of telecommunication technology at Nortel Networks.

But always in the back of her mind, she carried with her the dream of becoming a full-time artist, a seismic career switch for a woman who had spent the past 20 years developing impressive academic and professional credentials in the fields of physics and telecommunications.

The change in careers came a little earlier than originally planned with the fall of Nortel.

"I'm now a full-time artist with science as a hobby," said Tremblay.

Tremblay, who grew up in Quebec City, was interested in studying the physical world, with math simply providing the paintbrush to bring her observations to life.

"The maths are an essential tool to describe the world we live in," she said.

"Physics is the best way to do a lot of maths while linking it to the physical world, so I found that exciting," said Tremblay. "Physics means you study something that's real."

During her off time while studying in England, Tremblay toured art museums throughout Europe, and developed a second passion in life.

"I was having a natural interest in art," Tremblay said.

The fledgling artist visited many of the great museums in France, such as the Louvre and the Musée d'Orsay, as well as some of the smaller venues devoted to only one artist, such as Picasso and Rodin.

"They're still jewels," she said.

Those tours allowed Tremblay to begin learning the tools she would need to prepare for a career in art.

"A seed was planted in my heart in Europe," she said. "I had a decade to prepare."

When she started working as a scientist, Tremblay used her off hours to learn the fundamentals of painting, such as drawing techniques and the proper way to mix paint.

"This is a life-long learning curve," Tremblay said. "You need to have a lot of tools in your toolbox."

Since 2002, Tremblay has become a full-time artist and part-time scientist - she works as a professor in the electrical engineering department at the University of Ottawa.

She has entered high-profile exhibitions in the United States, including the Paint the Parks Top 11 in 2007, 2011 and 2012 as well as The Art of Conservation, an international annual event presented at various prestigious museums and the Society of Animal Artists exhibition from 2010-12.

She won the grand prize in the Paint the Park Top 100 in 2008 and was selected a finalist in the landscapes category and wildlife art category of the Artist's Magazine Annual Art Competition, which draws entries from nearly 15,000 artists every year.

Every year, Tremblay opens her home to the public, participating in the annual Kanata Artists Studio Tour.

She lists some of her influences as Canadian wildlife artist Robert Bateman, as well as painters Patricia Pepin and John Banovich.

In 2002, Tremblay founded an art school that she runs out of her home in Kanata Lakes.

Tremblay's eye for precision influenced her taste in art.

She said she approaches her paintings from the perspective of a scientist and that her work is the result of careful planning and analysis.

"A lot of my work is so realistic to the extreme," she said. "That means I have to do a lot of research on the subject."

Every year, Tremblay plans one to two trips to remote areas to "research" her paintings.

"Every painting you see (on my wall) is the result of my research in the field," she said. "I'm climbing mountains, I'm walking in the deserts - for me that's the exciting part of the process."

Her research trips have included visits to Death Valley in eastern California, the Rocky Mountains in Alberta as well as the Florida Keys.

Her research provides an intense study of her paintings' subjects.

For instance, Tremblay spent countless hours in Andrew Haydon Park in Nepean, observing, sketching and studying a specific great blue heron, the subject of her acrylic painting, The Sovereign.

From start to finish, a painting can take between 80 to 200 hours for Tremblay to produce.

Tremblay said her future goal remains the same every year - improve as an artist, learn better technique and design.