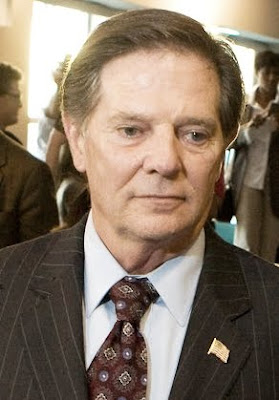 "He faces between 5 and 99 years in prison, though the judge may choose probation."

The New York Times
Tom DeLay, one of the most powerful and divisive Republican lawmakers ever to come out of Texas, was convicted Wednesday of money-laundering charges in a state trial, five years after his indictment here forced him to resign as majority leader in the House of Representatives.

After 19 hours of deliberation, a jury of six men and six women decided that Mr. DeLay was guilty of conspiring with two associates in 2002 to circumvent a state law against corporate contributions to political campaigns. He was convicted of one charge of money laundering and one charge of conspiracy to commit money laundering.

As the verdict was read, Mr. DeLay, 63, sat stone-faced at the defense table. Then he rose, turned, smiled and hugged his wife and then his weeping daughter in the first row of spectators. He faces between 5 and 99 years in prison, though the judge may choose probation.

A few minutes later, Mr. DeLay said outside the courtroom that he would appeal the decision. He called the prosecution a political vendetta by Democrats in the local district attorney’s office, and revenge for his role in orchestrating the 2003 redrawing of Congressional districts to elect more Republicans.

“This is an abuse of power,” he said. “It’s a miscarriage of justice. I still maintain my innocence. The criminalization of politics undermines our very system.”

The verdict ends the latest chapter in a long legal battle that forced Mr. DeLay to step down. The trial also opened a window on the world of campaign financing, as jurors heard testimony about large contributions flowing to Mr. DeLay from corporations seeking to influence him, and about junkets to luxury resorts where the congressman would rub shoulders with lobbyists in return for donations.

Rosemary Lehmberg, a Democrat and Travis County district attorney, said the decision to pursue charges had nothing to do with partisan politics.

“This was about holding public officials accountable, that no one is above the law,” she said.

During the three-week trial, the prosecution presented more than 30 witnesses in an effort to prove that Mr. DeLay conspired to circumvent the state law. Since 1903, Texas has prohibited corporations from giving money to candidates directly or indirectly.

Instead, prosecutors used a novel legal theory never before tried in Texas: They argued that Mr. DeLay and two of his political operatives — John Colyandro and Jim Ellis — had violated the criminal money-laundering law.

They were charged with conspiring to funnel $190,000 in corporate donations to state candidates through the Republican National Committee.

The main facts of the case were never in dispute.

In mid-September 2002, as the election heated up, Mr. DeLay’s state political action committee, Texans for a Republican Majority, gave a check for $190,000 to the Republican National Committee. The money had been donated earlier in the year by various corporate lobbyists seeking to influence Mr. DeLay, several witnesses said.

On Sept. 13, the check was delivered to the R.N.C. by Mr. Ellis, who was Mr. DeLay’s top political operative in Washington and headed his federal political action committee.

At the same meeting, Mr. Ellis also gave the Republican director of political operations, Terry Nelson, a list of state candidates and an amount to be sent to each. Mr. Nelson testified that Mr. Ellis had told him the request for the swap had come from Mr. DeLay.

In early October, donations were sent from a separate account filled with individual donations to seven Republican candidates in Texas. Six of them won. Republicans took control of the Legislature for the first time in modern history and in 2003 pushed through a redistricting plan, orchestrated by Mr. DeLay, that sent more Texas Republicans to Congress in 2004 and helped him consolidate power.

Jurors had to wrestle with the questions of what Mr. DeLay knew about the transaction, when he found out and whether he participated in the decision to swap the money.

Another central issue facing the panel was whether the corporate contributions could be considered illicit. To be guilty of money laundering, the prosecution had to show the money had been obtained through an illegal activity before it was laundered.

Prosecutors presented a mountain of circumstantial evidence — e-mails, telephone records, calendars, brochures and other documents — trying to persuade jurors that Mr. DeLay played a leading role in the plan and intended to break the Texas election law from the moment his political operatives solicited the donations.

The prosecutor, Gary Cobb, said the prosecution had a tough job in demonstrating that Mr. DeLay was responsible for the actions of his political associates, Mr. Ellis and Mr. Colyandro, who did not testify and still await trial on lesser charges.

None of the other witnesses testified directly about Mr. DeLay’s control over the decision, and the prosecution instead relied on interviews Mr. DeLay had given to prosecutors and journalists. “It was almost entirely circumstantial, and there were a lot of people with motives not to have Tom DeLay convicted,” Mr. Cobb said.

During the last day of deliberations, the jurors asked for transcripts of Mr. DeLay’s interview with prosecutors in 2005, in which he said he knew about the swap in advance. “Jim Ellis told me he was going to do it before he did it,” Mr. DeLay said in the interview.

But the lead defense lawyer, Dick DeGuerin, maintained that the money swap was legal because the Republican National Committee kept a firewall between accounts holding corporate and individual contributions.

“It’s not the same money” was his mantra during the trial.

He also presented evidence to distance Mr. DeLay from the actions of his political operatives, arguing that while Mr. Ellis told Mr. DeLay about the transaction, Mr. DeLay never gave his approval.

Judge Pat Priest has wide discretion in sentencing the former majority leader, who was known as the Hammer for his no-holds-barred style during 20 years in the House of Representatives.

Mr. DeGuerin said Mr. DeLay would try to convince an appeals court that the money-laundering statute should never had been applied to the money swap — because the original donations were legal and also because the donations to the state candidates came out of a different account than the one in which the corporate donations were deposited.

The New York Times
After a year of increasingly depressing news about the unbridled, unaccountable influence of big money in political campaigns, a Texas jury stood up for honesty in campaign finance on Wednesday and convicted Tom DeLay, the former House majority leader, of money laundering. Unfortunately, there are now many new ways for politicians to commit acts similar to those for which Mr. DeLay was convicted, all of them perfectly legal.

During his tenure leading House Republicans, Mr. DeLay established a new low in ethical conduct among Congressional leaders. He put family members on his campaign payroll, took lavish trips paid for by lobbyists and twisted the arms of K Street lobbyists to ante up and donate to his party’s candidates and hire more Republicans. But his conviction on Wednesday came from something else entirely, a scheme to steer corporate contributions to Republicans in the Texas Legislature.

Texas bans corporations from giving money directly to state candidates, just as federal law does at the national level. But Mr. DeLay figured out a way around that barrier: In 2002, he used his state political action committee to channel $190,000 in corporate contributions to the Republican National Committee, which then donated the same amount to seven Texas House candidates. Six of them won, and Republicans took control of the Legislature for the first time in modern history, redistricting the state’s Congressional districts to the party’s benefit.

“This was a scheme to get corporate money that they knew could not be used in Texas and get it to these candidates,” one of the prosecutors, Beverly Mathews, told the jury. “Tom DeLay was in on it.”

The prosecution called that money laundering — an untested legal theory in Texas — and the jury agreed, also convicting him on a conspiracy charge. The first charge carries a penalty of up to life in prison, although it seems unlikely his sentence will be that long.

Mr. DeLay will presumably pursue multiple rounds of appeals. But whether he wins or loses personally, his larger goal of finding ways to get more corporate money into politics has already been achieved. Thanks to the Supreme Court under Chief Justice John Roberts Jr., corporations are now free to donate unlimited amounts of money. They cannot give it directly to candidates, but they can give to “independent” committees that run ads for or against candidates. To most viewers, ads run by these committees — as the nation saw during the midterm election campaign — are indistinguishable from those run by the candidates themselves.

In a trend Mr. DeLay undoubtedly appreciated, most of that new corporate money went to Republicans. He may go to jail for violating the letter of the law, but a whole new generation of political operatives is still violating the spirit in which that law was written. His conviction should stand as a warning for how society regards that violation.
Posted by Mercury at 3:24 PM