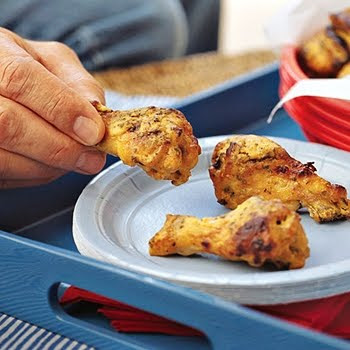 I am surprised that city and state laws aren't passed that prohibit the distribution of food at these events. I doubt that the board of health is cruising the offerings as many have done at state fairs prohibiting the sale or sampling of farm based products. And then there is the issue of taxation and consumption of alcohol. What about liability?

Reuters
The sun is starting to sink behind the horizon, the two industrial-sized Margarita machines in the back of a pickup truck are churning, the portable hot tub is bubbling and a powerful sound system is thumping.

From the warm sands of South Beach in Florida to the frozen tundra of Lambeau Field in Wisconsin, 'tailgate parties' are a major feature of NFL Sundays as football fans congregate in stadium parking lots across the United States to worship at the gridiron altar.

Combining Americans' love of cars, sport and food, tailgating -- hosting pre-game parties from the open back of a vehicle -- has become a national cultural phenomenon and a weekend ritual.

"It's a neighborhood (where) you can walk the streets and say hello to your neighbors," Joe Cahn, the self-proclaimed Commissioner of Tailgating, told Reuters. "It is like walking through thousands of backyards. The NFL has provided a place for the community to get together.

"In years gone by it was the grandstand on the Fourth of July and now the American community, all backgrounds, all ethnic groups, all races, get together in the parking lot.

"We have made lifelong friends across the country from this thing we call a parking lot."

Cahn, who sold his New Orleans School of Cooking in 1995 to take up a nomadic lifestyle, has spent the last 15 years criss-crossing the U.S. in a motor home known as the "Joemobile," with a closet stocked with jerseys from all 32 NFL teams, logging more than 800,000 miles (1.2 million kms) and attending more than 650 NFL and college games.

The jolly, grey-bearded 62-year-old works his way through packed parking lots on game day waving and shaking hands, wearing a Houston Texans jersey saying "Commish" (Commissioner) on the back.

Cahn is the world's foremost tailgating authority and historian with his own website ( www.tailgating.com ). He is head of the Tailgating Institute he founded and host of 'Tailgating Throwdown', a television show about the "quest to find the tastiest tailgate treats all over America."

Tailgaters will tell you that the tradition in its most basic form can be traced back to the American Civil War, when locals laid out picnics to watch the North and South battle.

It is, though, widely recognized that modern tailgating has its roots in sport and the first college football game between Rutgers and Princeton in 1869 when players and fans mingled later for food and drink.

Like the game of football itself, tailgating bears little resemblance to its chuck wagon past, having grown into a multi-million dollar industry.

The American Tailgater Association estimates that close to 25 million Americans tailgate each year and, according to tailgating.com, each will spend $500 on food and supplies.

There are companies that will custom design and build your tailgating dream machine for hundreds of thousands of dollars or sell you a do-it-yourself kit.

There are portable, space-age grills designed specifically for the demands of tailgating which can cost up to $25,000 and stores specializing in tailgating food and books on how to prepare it.

There are tailgating clubs and associations, handbooks and guides and this year at the Super Bowl in Dallas the first tailgating world champion will be crowned.

"I hate to say it's men with toys but let's call it like it is," laughed Cahn. "Every game I walk around I find something new. That's the fun part."

From a distance the pre-game party resembles a cross between the Woodstock music festival and a sprawling refugee camp.

Closer inspection reveals a high-tech wonderland, a testament to American ingenuity as tailgaters engage in friendly battles of one-upmanship limited only by their imaginations and the size of their wallets.

In Pittsburgh, John wheels into the Heinz Field parking lot driving a $150,000 customized black pickup that unfolds like something out of the Transformers film. When the tailgate comes down a barbecue rolls out and a plasma screen pops up.

Others have made their rides more personal projects, converting everything from old ambulances and school buses into football shrines, complete with fireplaces, hot tubs and ice sculptures.

Browns fan Ryan O'Connell parks his tricked-out 1969 Oldsmobile hearse, which he says was used in the original Ghostbusters film, in pole position opposite Cleveland's Rock and Roll Hall of Fame for a good reason.

"We love this place because we can use the public washrooms at the Rock and Roll Hall of Fame," said O'Connell pointing across the road. "We have the exact same spot every year."

Cahn says he has eaten bear stew at Lions games in Detroit and had roasted lion when Detroit visited the Windy City to take on the Bears.

There are artery-clogging treats such as 'Fatties' -- sausage meat wrapped in bacon and smoked -- and tailgating standards of sausage and burgers washed down by cold beer.