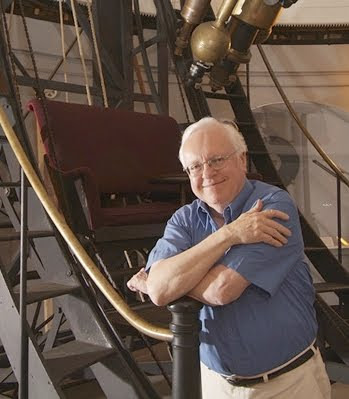 Scientific American
Brian G. Marsden, who as director of the International Astronomical Union's Minor Planet Center (MPC) was the official record keeper for most of the astronomical discoveries in the solar system in recent decades, died November 18, according to an obituary bulletin from the MPC. He was 73.

The MPC, housed since Marsden took it over in 1978 at the Smithsonian Astrophysical Observatory in Cambridge, Mass., serves as a clearinghouse of data collected by observers around the world, amateur and professional alike. The center catalogues the data and computes orbits for objects such as near-Earth asteroids, main-belt asteroids, comets, and distant bodies in a region near the orbit of Pluto known as the Kuiper Belt. It also notifies astronomers of which newfound objects are in need of follow-up observations and confirmation.

Marsden served as MPC director until 2006, when he began serving in an emeritus capacity. The center's mission was a natural fit for Marsden, who as an 11-year-old in England was already working on ways to calculate the motion of the planets, according to the MPC bulletin. He studied at the University of Oxford, working on the orbital mechanics of comets, and moved to Yale University for graduate school.

In 1965 he came to the Smithsonian Astrophysical Observatory, where he continued to work on the motion of small bodies in the solar system and eventually took the helm of the MPC. As director, he took some heat in 1998 for suggesting that a large, newly discovered asteroid called 1997 XF11 had a chance—however slight—of striking Earth in the future. The announcement created a public stir, but analysis of more data essentially nullified the probability of impact.

The field of solar system studies changed dramatically during Marsden's MPC tenure. When he took over the center, the solar system had been catalogued in comparably little detail. Virtually all near-Earth asteroids, of which some 7,000 are now known, have been discovered in just the past 15 years. And the presence of the Kuiper Belt had yet to be confirmed; until 1992 Pluto was a lonely planet in the outer reaches of the solar system. Before long the books were filling up with Kuiper Belt objects, some of them rather large, and Pluto was demoted by the International Astronomical Union (IAU) in 2006 to a dwarf planet. As minder of the records that rendered the erstwhile ninth planet rather ordinary-looking, it was fitting that Marsden relinquished his position just as Pluto did.

"It was also at the IAU meeting in Prague that Dr. Marsden stepped down as MPC director," the MPC bulletin states, "and he was quite entertained by the thought that both he and Pluto had been retired on the same day." The obituary did not provide a cause of death.

This one is tough. I knew Brian; not terribly well, but we were friends. He was the Director Emeritus of the Harvard Smithsonian Minor Planet Center, having run the asteroid and comet clearing house for many years. Anyone from anywhere in the world who discovered a minor body sent the note and data to him. He may not be a household name, but every planetary astronomer on Earth, and many amateurs as well, knew him by name.

You can read his obituary online, and I imagine a lot of bloggers will be writing stories about him — he was quite a character. Let me tell you one of mine.

Back in 1997 or so, I was working on STIS, a Hubble camera that had just been lofted into space and installed into the observatory. We got a lot of pictures from the camera, of course. We had software which automatically grabbed all the new data overnight, and first thing every morning I’d go through them to see if there was anything interesting.

One day, I found a little streak in an image. Ha! I knew right away it was an asteroid. I checked more images, and sure enough we had a total of nine pictures of it! I worked with my friend Eliot Malumuth for a couple of hours on it; the streak it made was curved, which we were able to attribute to the changing perspective of Hubble as it orbited the Earth. But we were able to tease out a rough distance from that — smack in the middle of the main asteroid belt between Mars and Jupiter — and then calculate its size; roughly a kilometer (0.6 miles) across.

Excitedly, I called Brian. I had chatted with him once before, when the asteroid 1997 XF11 was thought to be a potential danger, and was already thinking of names for the rock since I would be granted discovery status. I told him about the asteroid, and could hear him "yes"ing and "mmmkay"ing over the phone. I asked if it would be possible to get followup observations, since we couldn’t get a good orbit over such a short period of time.

That’s when he asked me a simple question. "How bright is it?"

I had already measured that. "24th mag," I promptly replied.

What I heard next over the phone was a surprise: laughter.

And before he could say anything, I knew why he was laughing. 24th magnitude is faint. The faintest star you can see with your eye is a million times brighter than my asteroid. There wasn’t much of a chance a ground-based telescope would be able to follow up, or at least, it wasn’t worth the time of the size of telescope we’d need.

Feeling foolish, I thanked Brian for his time, and we both got a good laugh out of it. That still makes me smile. And no, I never heard of any followup of that asteroid.

One other thing. When we were filming the first episode of Bad Universe, we went to the Minor Planet Center and interviewed Brian. He and I sat on the observer’s chair at the venerable Harvard 15″ telescope, chatting on camera about near-Earth asteroids, the Minor Planet Center’s role, Brian’s role, and other topics. We also ate lunch together with the film crew, where he told us about the history of the observatory. Due to the vagaries of making a TV show, the segment with him didn’t make it to air, but it was a lot of fun to get to hang with him, even if only for a couple of hours or so.

Astronomy won’t be the same without him.