Not just a chemist, but a rock and roller 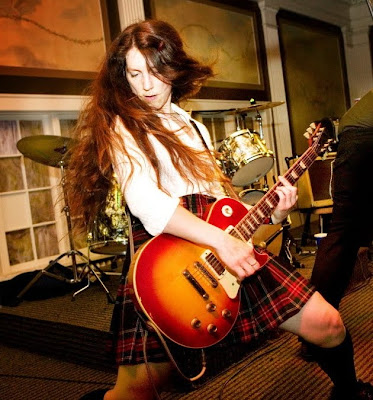 This is rather unique...a professor, researcher...and musician. Such is the life of Willamette University's Karen McFarlane Holman. Karen and the Funhouse Strippers rock.

The Oregonian
In the basement of Willamette University's Olin Science Center, Karen McFarlane Holman swiftly scrawls formulas for molecules across a white board that stretches before an attentive class of 30 chemistry students.

She bounces from one molecule to another, peppering students with questions about dipoles, electrons and polarity. She points to a positively charged nitrogen dioxide molecule, noting the two oxygen atoms are pulling electrons from the nitrogen.

"We have two parts playing tug of war, one not stronger than the other," she says.

The 43-year-old chemistry professor's passion is shining light on the secrets of molecules, whether here in the classroom with abstract formulas or in a dark lab with a laser.

Raised in Eastern Oregon, Holman also has a full life beyond academia as a mother of two young children, a veteran punk-rock guitar player, founder of an emerging community radio station in Salem, traveler, hiker and student of yoga and meditation.

But it's for her classroom success that Holman's in Washington, D.C., today to be named 2010 Oregon Professor of the Year by the Council for Advancement and Support of Education and The Carnegie Foundation for the Advancement of Teaching.

Holman survived three levels of screenings by national panels of educators to be chosen from more than 300 nominations as Oregon's top professor. The panels selected her for her impact on students, scholarly approach to teaching, contribution to undergraduate education and support from colleagues and former students. She's Willamette's 10th professor and third chemistry professor to win the honor since 1990.

"We blew that out of the water by week two," she says.

Holman's longtime friend Kelli Hagen, a high school chemistry teacher at Palo Alto High School in California, says Holman is always trying to become a better teacher. The two friends were roommates in college and graduate school, maids of honor in one another's weddings, and they played together in a California punk rock band.

"She is just a really, really warm, interesting person," Hagen says of her friend. "Her nature is to be inquisitive about life and to seek new experiences. ... Not boring, definitely."

You could say the professor rocks. Music videos of the Funhouse Strippers -- the Salem-based punk rock group she plays with occasionally -- display her energy and skills. Dressed like a Catholic schoolgirl in a plaid skirt and white blouse, Holman swings a mean electric guitar, her long brown hair flying as she leans into the microphone and shouts the refrain of a fast-pounding song called Murderer's Thumb: "She's got love, she's got love, she's got love."

She grew up in La Grande, the youngest of four children and daughter of Don McFarlane, a radiologist and undergraduate chemistry major. She taught herself to read, says her mother, Dianne McFarlane, and was drawn to science as a young girl.

Holman's parents, both pilots, cultivated Holman's love of travel by taking her and her siblings on flights as far away as Mexico City and Washington, D.C. Holman spent her junior year in high school as an exchange student in Bogota, Colombia, where she became fluent in Spanish.

She was a student at Willamette University before she became a professor there in 2001.

Though heavily inspired by her high school chemistry teacher, Chuck Jones, she arrived at Willamette thinking she would pursue a path either in pre-medicine or physics rather than chemistry.

In a botany class as a junior, however, she discovered her interests were rooted in the world of molecular chemistry. In a quest to understand how plants release oxygen, she probed beyond the leaf to the cell, to parts of the cell, to the molecule, where she discovered a metal molecule helped trigger the oxygen release.

"Once I got to the molecular level, I felt happy," she says. "You can keep going smaller and smaller, and you can get into the realms of physics, and then I stopped caring as much."

She quickly became a top chemistry student, catching the eye of professors like Frances Chapple, the 1990 Oregon Professor of the Year, who is now retired.

"She was so intensely absorbed," both in the class and in her lab projects, Chapple says.

While studying for her doctorate in chemistry at the University of California at Santa Barbara, Holman was again drawn to metals and inorganic chemistry. She joined a group that studied metal compounds through a practice called spectroscopy.

"They shot them with lasers," she says. "They blew the molecules apart, and then they shone another laser through them to see what was happening with the molecules."

During her three years of post-doctoral studies at the University of California at Berkeley, she learned how to use nearby Stanford University's linear particle accelerator to do X-ray spectroscopy, again in studies involving metals and the release of oxygen from plants.

As a Willamette professor she takes students up to three times a year to Stanford, where she reserves time on the linear accelerator so she and her students can shoot molecules with X-rays.

She has focused her research, which is widely published, on the properties of compounds that contain a metal called ruthenium. Researchers have found ruthenium is effective in killing metastatic cancer cells and several ruthenium-based drugs are being tested for cancer treatment. Holman researches at the molecular level to figure out how the drugs change inside the body and how ruthenium gets into cancer cells.

"I feel like this project is going to stay with me until I ... retire," she says.

Now a tenured professor, chemistry department chairwoman and under review for full professor, Holman says she's sometimes gets impatient that she cannot move faster in her research because of her instructional duties.

On the other hand, she says, "I get to go into the classroom and be with these great students, and I get to talk about the stuff I love with them. ... I love it."
Posted by Mercury at 4:46 PM