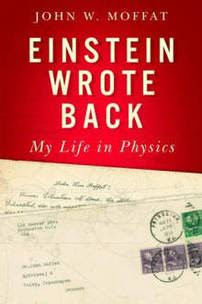 ISBN 9780887626159
The Perimeter Institute...is that where old physicists go--Stephen Hawking...John Moffat? Either there or the SETI institute like Carl Sagan and Philip Morrison.

"A physicist with chutzpah"

Globe and Mail
Nothing about John Moffat’s career in physics has been ordinary. For more than half a century, he’s been challenging the status quo, pursuing unorthodox ideas that have often met with sharp resistance from the physics community.

In fact, had his career path been any more unorthodox, he probably wouldn’t have become a physicist at all; it’s easy to imagine a parallel universe in which Moffat, pursuing just slightly crazier ideas, would simply be dismissed as a crank.

Instead, Moffat did play by the rules – or at least, he obeyed them more often than he broke them – and ended up making important contributions to several branches of modern physics.

He also interacted with nearly all of the great physicists of the 20th century, including Niels Bohr, Erwin Schrödinger, Wolfgang Pauli, Paul Dirac – and, by mail, Albert Einstein, as noted in the title of this entertaining new memoir.

Moffat’s entry into the world of physics could hardly have been less predictable. Born in Denmark and sheltered in Britain during the Second World War, his first love was art. After the war, he moved to Paris and dreamed of becoming a famous painter.

With his funds running out, however, he returned to Copenhagen, where he chanced upon a couple of popular science books by Sir Arthur Eddington. The books, which explored current problems in astrophysics and cosmology, sparked something in the youngster: “It’s as if they turned on a switch in my brain,” he says. They triggered “an emotional desire to know the truth of how the universe began.”

Borrowing books and journals from the local university library, Moffat got to work. In less than two weeks he had mastered calculus, and before long he had absorbed the equivalent of a bachelor’s degree in physics. He took an interest in Einstein’s latest work on a “unified field theory,” the attempt to combine gravity with electromagnetism. Moffat wrote and published two papers on the subject, and, filled with youthful enthusiasm, mailed them to the aging scientist in Princeton, N.J.

To his surprise, the great man wrote back, treating Moffat “as an intellectual equal.” (Since Einstein’s letter was in German, Moffat took it to his German-speaking barber for a translation. “Well, John,” the barber said afterward, “It looks as if Herr Doktor Einstein is taking you seriously.”)

Determined to enter the academic world, Moffat eventually found himself in Cambridge, where he was admitted into the university’s PhD program even though he had no undergraduate degree – an unprecedented occurrence.

Moffat would spend the rest of his career tackling non-mainstream subjects; his most vigorous pursuit would involve attempts to modify Einstein’s equations for gravity, known as general relativity.

While Moffat’s personal story is inspiring, the real treasure lies in his series of encounters with the great minds of the past 60 years.

Take Austrian physicist Pauli: On a visit to Cambridge, the gruff Pauli asked for a meeting with the university’s young physicists, to hear about their research. One by one, they scribbled equations on a blackboard, while Pauli – resembling “a large toad, his head nodding vigorously” – watched with apparent scorn, dismissing each presenter with derisive comments: “I will not witness any more of this uninteresting calculation,” to one; “utter rubbish!” to another.

When Moffat’s turn came around, things seemed to go equally poorly; Pauli dismissed his work as “utter nonsense.” But Moffat stood his ground, insisting that his work was not nonsense – causing a “hushed silence” to fall over the room. Pauli then approached and embraced the young scientist. “Wunderbar!” he exclaimed. “This young man speaks back!”

Now based at the Perimeter Institute in Waterloo, Ont., Moffat, at 78, seems determined to keep pursuing “outside-the-box” physics – and to continue standing his ground.
Posted by Mercury at 7:03 AM