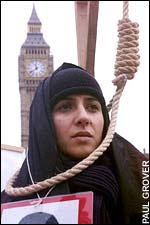 It has been a couple of weeks since news about Sakineh Mohammadi Ashtiani's execution. Here is the latest.

"Life of woman sentenced to death by stoning could be spared"

guardian.co.uk
Iran has signalled for the first time that it may spare the life of Sakineh Mohammadi Ashtiani, the Iranian woman whose sentence of death by stoning for adultery has sparked an international outcry.

Mohammad Javad Larijani, a top adviser to the Iranian supreme leader, Ali Khamenei, and the current secretary general of Iran's High Council for Human Rights told Press TV: "Iran's Council of Human Rights has helped a lot to reduce her sentence and we think there is a good chance that her life could be saved."

The unprecedented comments by Larijani, whose brothers are holding key positions in the Islamic Republic, one as the head of parliament and the other as the chief of judiciary, came after his visit to the UN last week where he extended an invitation during a meeting with Ban Ki-moon to the UN's human rights chief to visit Iran.

Should Mohammadi Ashtiani's life be spared it will be a victory for human rights activists and the media around the world who devoted a significant amount of time campaigning against her execution.

Once again, Larijani compared Mohammadi Ashtiani's case with that of Teresa Lewis who was executed by lethal injection in the US state of Virginia for arranging the murder of her husband and stepson.

"In the US, a woman killed her husband, with the aid of her ex-lover, and even though she was suffering from mental disorder, she was sentenced to the capital punishment and was executed … The same incident took place in Iran, and the woman was condemned to capital punishment, but her case is still open for further revision," Larijani told Iran's English language TV Channel, Press TV.

In previous months, Iran has tried to distract attentions from Mohammadi Ashtiani's initial adultery charge and stoning sentence by introducing new charges against her and portraying her as a murderous woman.

Larijani said: "Nothing is said about the American woman, but there are lots of criticism regarding our judicial system [and this shows] how biased, unrealistic and hypocritical and malicious [the media is when it looks at Iran]."

Larijani, whose rights body works under the direct guidance of the judiciary, denounced a recent UN resolution that criticises Iran for violating human rights. He described the US as a "mastermind" behind the resolution and said: "Washington's main reason behind the move was Iran's new model of democracy which is not a replica of secular Western democracy."

The campaign for the release of Mohammadi Ashtiani was initially launched by her 22-year-old son, Sajad Ghaderzadeh, who is in prison after giving interviews to foreign media in support of his mother. Mohammadi Ashtiani's campaign has since been publicised by several foreign governments and her plight for freedom has been backed by activists and celebrities around the world.

Last week, Iranian state TV broadcast a statement by Mohammadi Ashtiani who described herself as a "sinner" and accused Mina Ahadi, an activist of the German-based International Committee against Stoning (Icas), of spreading her story around the world. Since then, Iran has charged the two German journalists who were arrested following an interview with Mohammadi Ashtiani's son, with espionage.

Amid international attention to Mohammadi Ashtiani's stoning case, Iran has planned to execute Shahla Jahed, a mistress of a former footballer star on 1 December. She has been charged with murdering his wife although she said later that her confessions were taken under duress. Shahla Jahed's case is one of Iran' most highly debated criminal court dossiers.


Swift justice in Iran...Sakineh Mohammadi Ashtiani to be hung today
Posted by Mercury at 4:53 AM