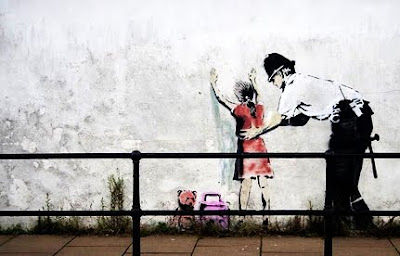 Sometimes common sense is more accurate than a full-body scan and a pat-down.

"Pat-Downs 101: Nine Things to Know About Your Thanksgiving Airport Screening"

With the holiday rush set to spike next week, travelers are beginning to ask questions: What should I expect as I go through airport security this year? Will TSA make our children cry? Will they touch our junk? After speaking with a TSA spokesperson, and extensively researching the issue, NewsFeed thinks we've uncovered some basic answers to your most urgent concerns:

The info we found: Sixty-eight airports around the country now have full-body scanners, which work by walking into the machine and raising your arms. An X-ray is then taken of each side of your body and analyzed by TSA officials. The new scanners are much more advanced than previous ones and produce X-rays with rather detailed images of travelers' bodies. Some might say too detailed and revealing. If your airport now has full-body scanners, you can expect that this will be the primary scanning tool being used.

So, can the TSA see underneath my clothes with these full-body scans?

In a sense, yes. The scans see beneath outer attire to offer a chalky picture of a person's body, as well as any hidden objects that may be beneath the clothing. According to the TSA, the faces of those being scanned are blurred out, the images are not recorded nor saved onto a database, the pictures cannot be printed off and all images are immediately destroyed once analyzed. TSA says the images are viewed in a private room by TSA officials, with the identities of travelers remaining anonymous. But these claims have not prevented organizations, including the American Civil Liberties Union, of alleging that the new scanners violate Americans' privacy.

Also, TSA Spokesperson Nick Kimball says that the recent reports linking TSA's scanners to the leak of 100 body scan photos from a security checkpoint in a U.S. Marshals office in Florida is misleading. "That incident is completely separate from the TSA," Kimball said. "The TSA doesn't have the ability to store or print anything."

Can I refuse to submit to a full-body scan?

Yes, but you then must undergo a mandatory pat-down.

If I submit to a full-body scan, could I still be subjected to a pat-down?

Yes. Pat-downs will still be performed on a random basis, or if a traveler sets off traditional metal detectors, wears bulky clothing or refuses to remove headwear,

How intimate does TSA get these days with the pat-downs?

Pretty intimate. With the new rules in effect, the TSA can now use a sliding motion to pat down travelers, which can include checking inner thighs and buttocks. That sliding technique prompted the viral “don't touch my junk” video. If a traveler is wearing baggy pants, inspectors may also slide their hands beneath the waist line to check for objects.

Will pat-downs make me miss my flight?

Not likely. The pat-downs last around 2 minutes, whereas going through a full-body scanner takes only about 30 seconds. But if enough travelers opt for pat-downs, prepare for long lines.

How many full-body scanners are operational?

TSA has unveiled 385 full-body scanners all around the country, including at Dulles International in Washington, D.C., Logan International in Boston and JFK and LaGuardia in New York - some of the busiest airports in the world.

So why am I hearing so much about these new security procedures this week?

On Oct. 28, the TSA announced new rules in screening procedures (or what they termed an "unpredictable mix of security layers"). While the procedures are constantly in flux, the change came after the attempted Christmas Day bomber, Umar Farouk Abdulmutallab, tried to detonate plastic explosives hidden in his underwear mid-flight.

Bottom line: I've got a plane to catch, how can I get through security as quickly as possible?

There are three things the TSA recommends, Kimball says:

1. Have your ID ready before you reach an agent. You would be surprised how much time is wasted in fumbling for identification.

2. Take off your coat and shoes, and remove your laptop from your bag right away. Again: Many people don't do this initially, causing an unneeded delay.

And one helpful addition, courtesy of NewsFeed: Whatever you do, don't get unruly with TSA officials (or you may get an $11,000 fine).

Now enjoy the holiday. Save us some pumpkin pie (yes to the whipped cream, no to the ice cream).
Posted by Mercury at 7:09 AM