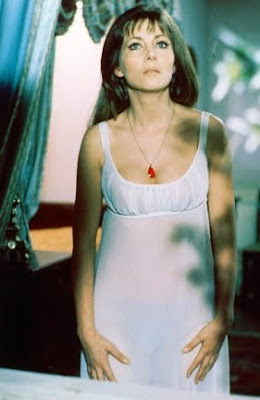 "Ingrid Pitt dies at 73; one of Britain's best-known horror stars"

Signed by Hammer Films, she played alongside horror legend Christopher Lee in 'The House That Dripped Blood' and was known as the buxom bloodsucker in 'Vampire Lovers' and 'Countess Dracula.'

Los Angeles Times
Ingrid Pitt, who survived a Nazi concentration camp and dodged Communist police to become one of Britain's best-known horror stars, died Tuesday in London only days after her 73rd birthday.

Her daughter, Steffanie Pitt, said her mother collapsed while on her way to a birthday dinner to be held in her honor over the weekend. The cause of death wasn't known, although Pitt had recently been in poor health.

Known in Britain principally as the buxom bloodsucker in "Vampire Lovers" and "Countess Dracula," Ingrid Pitt began her acting career with a role in the 1968 action-adventure movie "Where Eagles Dare" that starred Richard Burton and Clint Eastwood.

Signed by Britain's Hammer Films — home to Christopher Lee's "Dracula" — she played alongside the horror legend in 1971's "The House That Dripped Blood" and 1973's "The Wicker Man."

Pitt's birth in Poland on Nov. 21, 1937, interrupted her parents' attempts to flee Nazi Germany and escape to Britain.

Snared by the Germans, Pitt and her mother, who was of Jewish descent, were interned at the Stutthof concentration camp. Pitt survived the war and joined the Berliner Ensemble, where she worked under actress Helene Weigel, the widow of German playwright Bertolt Brecht.

But the political climate in East Germany didn't suit Pitt, who was outspoken in her criticism of Communist officials there.

She left Berlin on the night of her planned stage debut, diving into the River Spree, which runs through the German capital. Pitt was rescued by a handsome U.S. officer, whom she would later marry.

Pitt moved to America, and — following the breakup of her marriage — to Spain, where she starred in her first movies despite a limited command of the language. Discovered while watching a bullfight, a career in Hollywood and British horror films followed.

Although Pitt had a series of other roles in film and on television, it was her 1970s vampire films that drew a cult following.

She told an interviewer in 2006 that she did not particularly enjoy watching horror movies.

"I was in a concentration camp as a child and I don't want to see horror," Pitt said. "I think it's very amazing that I do horror films when I had this awful childhood. But maybe that's why I'm good at it."

In addition to her daughter, Pitt is survived by her second husband and a granddaughter.

The New York Times
Lovely and voluptuous, the actress Ingrid Pitt was given a choice early in her film career: pornography or horror. Ms. Pitt, who had spent her childhood in a Nazi concentration camp, later scoured Europe in search of her vanished father and still later was forced to flee East Germany a step ahead of the police, chose horror. It was a genre she knew firsthand.

Ms. Pitt, long celebrated as the first lady of British horror cinema, who starred in sanguinary classics of the 1970s like “The Vampire Lovers,” “Countess Dracula” and “The House That Dripped Blood,” died on Tuesday in London. She was 73 and had lived in London for many years.

The apparent cause was heart failure, her daughter, Steffanie Pitt-Blake, said.

Known for her tousled hair, pneumatic figure and sporadically sharp incisors, Ms. Pitt was most closely associated with Hammer Film Productions, the British studio famous for the lurid, the lascivious and the low-budget. The Queen of Scream, the British press called her. Hammer billed her as “the most beautiful ghoul in the world.”

In fact, Ms. Pitt made only a handful of horror films, and not all for Hammer. But her striking, barely clad screen presence and vampirical Middle European accent — it was her real accent — secured her an international cult following that seems likely to remain undead for years to come.

She was also an enthusiastic keeper of her own flame, appearing at horror conventions and maintaining an evocative Web site, pittofhorror.com. So earnestly did Ms. Pitt continue to inhabit her screen persona that she was known on occasion to bite the necks of interviewers — not enough to draw blood but enough for dramatic impact.

Ms. Pitt was born in Poland on Nov. 21, 1937. Her precise given name has been lost to time; British news articles have often rendered it as Ingoushka Petrov. Her father was German, her mother a Polish Jew, and in 1942 the Nazis picked the family up. Separated from her father and older sister, she was sent with her mother to the Stutthof concentration camp.

They were held there for three years. In interviews Ms. Pitt spoke of having seen her mother’s best friend hanged and her own best friend, a little girl, raped and beaten to death by guards. She recalled lying in the straw, dreaming of being someone else.

After the war she and her mother trudged from one refugee camp to the next, searching for her father and sister. They eventually found them, but by then her father was a broken man. He lived only five years more.

As a young woman Ms. Pitt was determined to be an actress. In the 1950s she joined the Berliner Ensemble, directed by Helene Weigel, the second wife of Bertolt Brecht, and based in East Berlin. A vocal critic of the East German Communist government, Ms. Pitt was pursued by the police on the night of her debut performance, in Brecht’s “Mother Courage and Her Children.”

Fleeing, she jumped into the River Spree with her costume on, only to be fished out by an American serviceman, Laud Roland Pitt Jr. In fitting dramatic style, she married him soon afterward. That marriage ended in divorce, as did her second, to George Pinches, a British film executive.

Ms. Pitt began her screen career with several minor films in Spain; that she spoke no Spanish was apparently no impediment. Her first significant picture in the United States was “Where Eagles Dare” (1968), starring Richard Burton and Clint Eastwood.

This led to an audition for James Carreras, then the head of Hammer. As Ms. Pitt recounted in a 1997 interview with The Guardian of London, she prepared meticulously:

“I turned up at Jimmy’s office in a maxicoat, a mane of hair, lots of makeup and high leather boots,” she said. “I walked up to him, threw open my coat like a flasher. I was wearing the tiniest and lowest-cut minidress you can imagine.”

She added: “He took me, darling, but not in the way film moguls are said to.”

Besides her daughter, an actress and graphic designer, Ms. Pitt is survived by her third husband, Tony Rudlin, a former racecar driver; and a grandchild. Her older sister, Brigitte, died earlier this year.

Though horror films made her famous, Ms. Pitt rarely watched them. “I don’t want to see horror,” she told The New Zealand Herald in 2006. “I think it’s very amazing that I do horror films when I had this awful childhood. But maybe that’s why I’m good at it.”

Sad news; I didn't know of her passing.I loved this gal in the "Hammer Horror" and "Where Eagles Dare". Will always remember her.Thanks for posting.